What will it take to get the approval of the Bitcoin ETF? 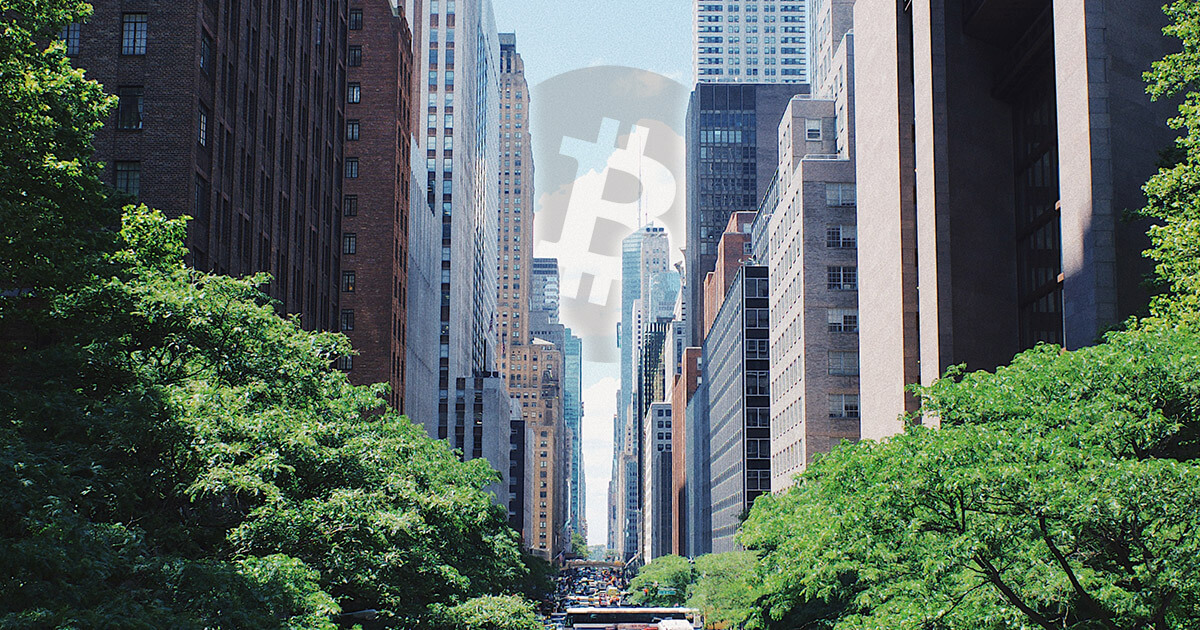 Recently there has been a lot of noise around the possibility of Bitcoin's ETF and although this kind of interest is not new to Bitcoin enthusiasts, this ETF outlook is becoming increasingly likely.

Since Bitcoin began to take hold in 2013, there have been institutionalization upheavals. Banks, hedge funds and venture capital funds have poured large amounts of capital into the markets in recent years.

The lack of easy access to Bitcoin is a problem that keeps investors constantly. For the most part, buying Bitcoin is a difficult task, as it can not be purchased through an e-trade account or Fidelity IRA. Institutions refuse to buy due to the risk of custody and many funds are legally excluded from the exploration of alternative assets.

Over the years, there have been attempts to create a Bitcoin ETF, initially as a way to make retail traders feel more comfortable at Bitcoin and now as a way to attract institutions to the party.

The first ETF was proposed to the SEC by the Winklevoss twins on July 1, 2013. It took until March 10, 2017, to be rejected, sending Bitcoin price down 25%. In a sense, the months following the ruling have seen Bitcoin more than triple.

How would a Bitcoin ETF change?

It is clear why a Bitcoin ETF captures the imagination of investors. An introduction of an ETF would signal greater acceptance of cryptocurrency as a financial instrument and will be crucial to attracting larger and more traditional players into the investment space.

Currently, it is impossible – and illegal, for pension funds, 401k, and most of the stockbrokers to offer Bitcoin to customers. An ETF would allow these sources to access and invest in Bitcoin, unlocking billions of dollars in capital. The ETF also allows investors to buy Bitcoins without the risk associated with holding a private key . In fact, the key points of Winklevoss's ETF deposit concerned custody.

"The investment objective of the Trust is that the Shares reflect the performance of the Blended Bitcoin Price of Bitcoin, minus the expenses of the operations of the Trust.The Shares are designed for investors seeking a convenient and convenient means to gain exposure to Bitcoins with minimal credit risk. "

Many people compare Bitcoin with gold, as they share similar characteristics. People often focus on the effect that an ETF had on gold to measure the impact of an ETF on Bitcoin. 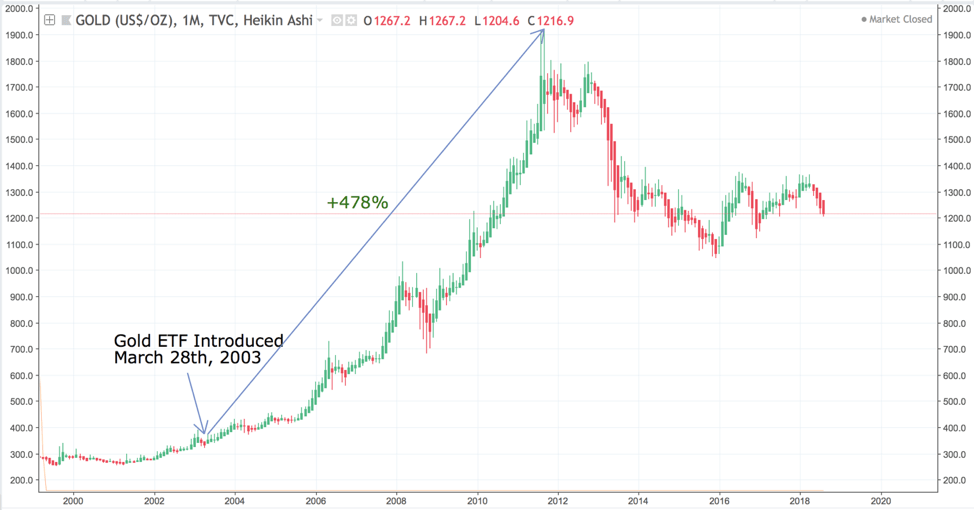 After the ETF for gold was introduced in 2003, prices have fallen from $ 331, 60 ounces to $ 1,917.90, an increase of 478%! Much of the smart money in the cryptocurrency investment space believes that a Bitcoin ETF will have a similar result on the market.

There are currently twelve Bitcoin ETFs considered by the SEC and an encrypted general ETF. 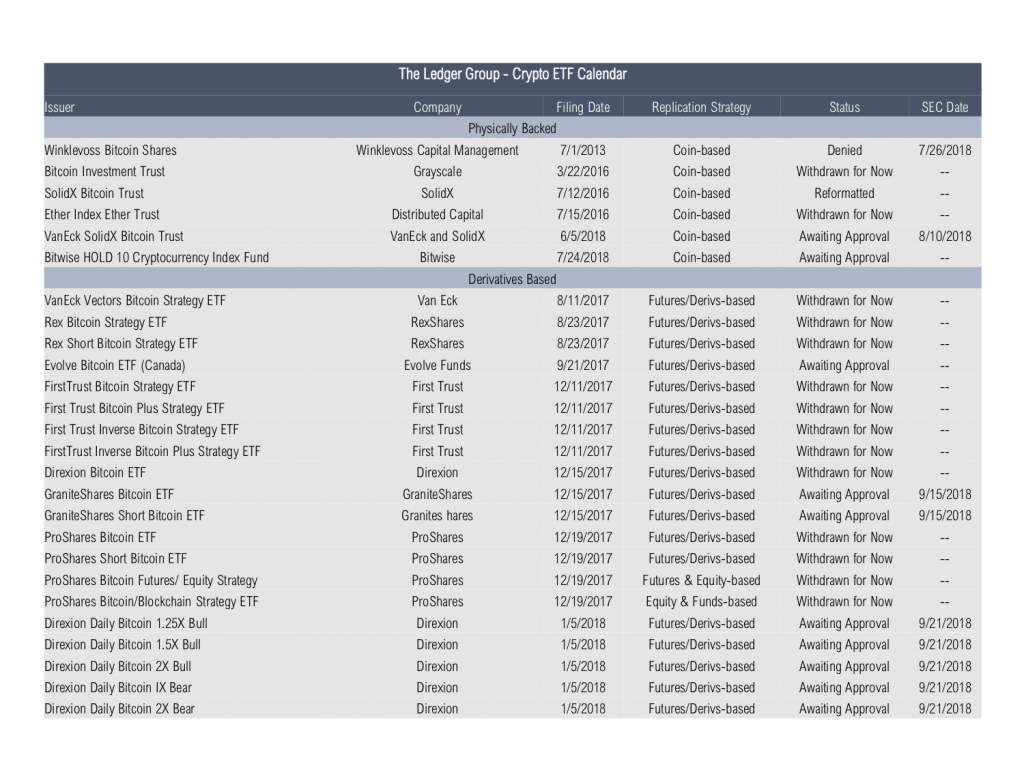 Of the twelve, the most promising ETF is the physically supported CBOE x VanEck which has a deadline for applications of 10 August 2018. However, many fear that this may be denied since last week that ETF Winklevii has not been approved.

So, what is the SEC looking for in an application?

In a January 2018 report on the concerns of Bitcoin's ETFs, the SEC outlined five main issues to be resolved prior to the approval of the ETF.

Evaluation: The cryptocurrencies are volatile and are exchanged on several platforms. The fund that sells an ETF must calculate the end-of-day net asset value (NAV) for tax and reporting purposes. Due to the fragmentation and price changes, this becomes difficult.

Custody: The best practices are not clear when it comes to memorizing the cryptocurrency. Futures are settled in cash and do not have to deal with custody. Many of the most promising applications of the ETF are proposing to effectively store and retain bitcoins. The SEC is concerned that the storage space may be insufficient. However, recent developments in the custody sector (such as the custody of Coinbase) have made resolution more likely.

Liquidity: A key feature of open funds, such as mutual funds and ETFs, is daily redemption. The SEC is concerned that there is not enough liquidity in the markets to support repayments in times of high stress. They want to make sure that funds invested in cryptocurrencies or cryptocurrency-related products have sufficient liquid resources to meet daily repayments. The rise of institutional platforms such as Coinbase prime is well positioned to tackle this obstacle and represents a step in the direction of solving the liquidity problem.

Manipulation : The role of the SEC is to protect US citizens from fraud and to ensure market integrity. President Jay Clayton noted that there are substantially less protections for cryptocurrent investors than traditional bond markets, with consequently more opportunities for fraud and manipulation, and he wants to see some responsibility in the markets. Another checkpoint is the FBI investigation into Bitcoin manipulation. If they conclude that the manipulation is both rampant (and difficult to stop), it becomes unlikely that the SEC will approve the ETF.

Arbitrage / Volatility: In order to promote fair treatment of investors, an ETF is required to have a market price that does not differ materially from the net asset value of the investor. 39; ETF. In light of the fragmentation and volatility in the cryptocurrency market, it becomes difficult to guarantee a fair price through arbitrage . One possible solution is to hire market makers or become a maker-marker, although this is difficult to solve and no clear solutions have emerged.

Are we still there?

While substantial progress has been made on four other issues, it appears that new applications do not adequately address the main problem of Bitcoin manipulation.

The arguments put forward by the SEC to deny ETF Winklevii were focused on market manipulation.

"[The application] states that the intrinsic properties of bitcoin and bitcoin markets, including the Gemini exchange, provide resistance to manipulation, but BZX failed to carry its load to show that its claim is correct." – Securities and Exchange Commission

Going forward, applications that support strong arguments that the manipulation of Bitcoin will not physically affect investors have the best chance of approval. Therefore, CBOE and Van Eck have structured their application to avoid such manipulation concerns. Historically, the SEC has delayed these questions and the August 9 deadline could be postponed, giving more time to ease the apprehension of manipulation.

After five years of waiting for an ETF, long-term investors are eager to see positive developments, and with smart money pushing for approval, the future looks promising for a bitcoin ETF.

Disclaimer: The opinions of our writers are solely their own and do not reflect the opinion of CryptoSlate. None of the information you read on CryptoSlate should be taken as investment advice, nor does CryptoSlate approve any projects that may be mentioned or linked in this article. Buying and exchanging cryptocurrencies should be considered a high-risk activity. Please do your due diligence before taking any action related to the contents of this article. Finally, CryptoSlate assumes no responsibility in case of loss of money by trading cryptocurrencies.

Get blockchain news and crypt insights.