Tron [TRX]dApphouse becomes live, smart contracts are enabled on Tronscan and much more!

On October 29th, the Tron Foundation published its weekly report to capture its technical developments. The report included all the technical progress suffered by the currency last week from October 20 to October 26. Here, some of the highlights of the update were the developments of dApp where it was stated that Transcan launched the Smart Contracts feature.

In addition, the report also mentioned that dApphouse went live during the last week. Regarding the revision and programming of Bancor DEX, Tron announced that both steps have been completed to kick off the development of Bancor. Tron is also working on his Android wallet that is believed to have reached halfway, according to the report.

Previously, Justin Sun, the CEO and founder of the Tron Foundation, also announced the future collaboration between Tron and Oracle blockchain. The report recognized this announcement and celebrated the fact in one of the points.

In addition to this, Tron's weekly report also talked about technical developments in depth and also discussed various global communities and developers.

Despite the positive nature surrounding the TRX ecosystem, the currency shows a 5.5% decline in its price. At the time of writing, Tron was trading at $ 0.0221 with a market cap $ 1.45 billion. The 24-hour volume of cryptocurrency was recorded at $ 74.7 million. 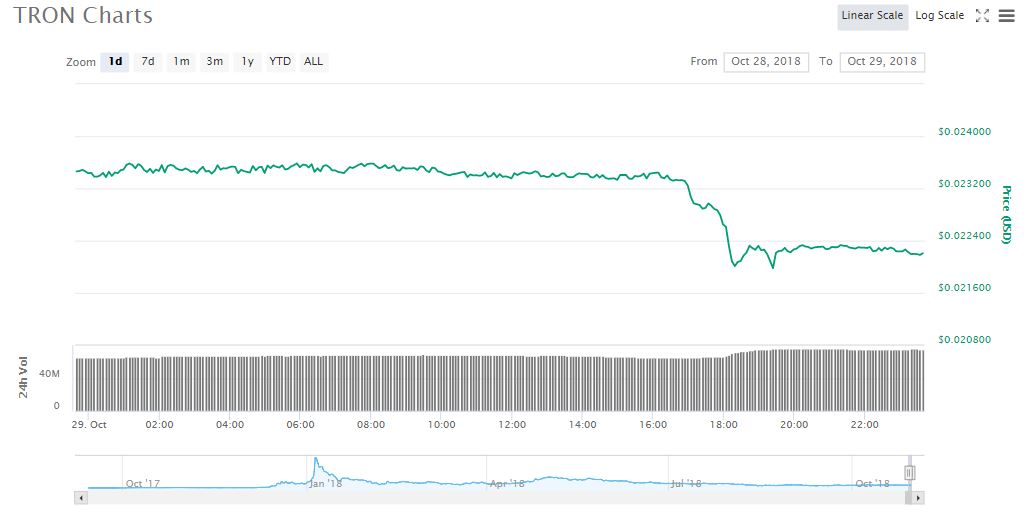 However, Tron is not alone in this, since all the other cryptocurrencies in the market have crashed on a large scale in an hour on 29 October.