New Analysis: Extreme flows in US flows are on the rise 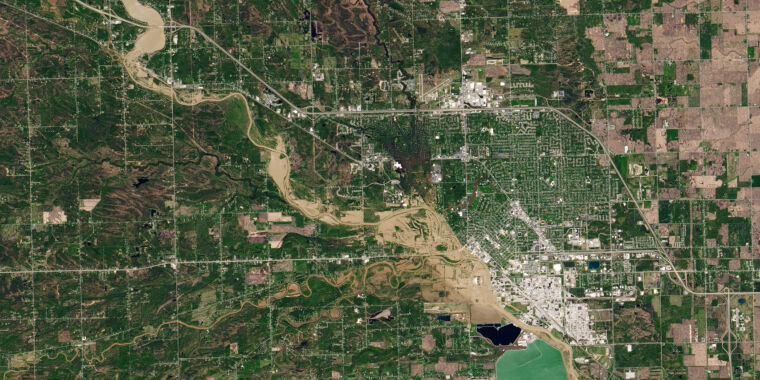 Climate change has direct consequences on the water cycle through our environment. The warmer atmosphere holds more moisture, causing intense thunderstorms to drain even more water than before. On the flip side, warmer air can suck even more moisture from the soil through evaporation, aggravating drought. These things should obviously involve changes for the flows. But the amount of water in streams varies greatly under normal conditions and can also be affected by more than just climate. Finding the trends in that data proved difficult.

A new study by Evan Dethier at Dartmouth College set out to group flows into physically meaningful categories to see if consistent patterns emerge once apples are separated from oranges. That analysis reveals some trends, both at the extremes of high flow is low flow.

Going with the flow

Many efforts have found conflicting trends between flows when analyzing records of peak annual flows, where records tend to go further back than constant measurements. Attempts to search for regional models have largely been based on grouping by arbitrary boxes or political boundaries, which have only a limited connection with the landscape.

The new research included approximately 540 stream stations in the United States and Canada, all from locations that have little human impact and that have at least 60 years of data. To put the stations into groups, they used their location, elevation, and seasonal flow pattern. The sites grouped into 15 different groups, 12 of which included a sufficient number of stations with which to attempt a trend analysis.

There are two big themes that pop up from the results: one for areas where snow melt leads to peaks in flow and another for areas where drought is prevalent. Snowmelt regions include the Pacific Northwest, the Rocky Mountains (in both the United States and Canada), the Midwest, Appalachians, and the Northeast. In these places, there is a trend towards higher peak flows in the spring or higher peak flows in the winter. This is consistent with the trend towards an early depletion of the snowpack with warming spring temperatures.

Separately, high flows in summer and fall have become more common in the Northeast, Midwest, and Appalachian regions, corresponding to rainfall trends.

In areas commonly prone to drought – the west coast and the southern belt of the country – current flow trends seem different. A higher frequency of low-flow summer and fall events is common around the world, with areas on the west coast seeing higher events as well. The researchers point out that low-flow events caused by drought tend to be largely regional in scale, helping them emerge in the analysis. In contrast, high-flow events caused by storms tend to be much more localized. However, with a large enough dataset, even these trends can become evident.

Where regions show statistically significant trends, the researchers say, the mean variation is a doubling the frequency of that type of flow events since 1950.

By better grouping similar flows, this method helps pinpoint the impact of climate trends on the blue ribbons that bind the North American landscape together. This means more information that can be used on a local scale. And as the researchers put it, “decisions regarding extreme high and low river flows have billion-dollar consequences.”