The Copernicus Sentinel-2 mission takes us to the Banks Peninsula in New Zealand’s South Island.

The Banks Peninsula, visible at the bottom right of the image, is made up of two overlapping extinct volcanoes: the Lyttelton volcano and the Akaroa volcano. The peninsula was formed by several volcanic eruptions that occurred about eight million years ago. The peninsula’s name comes from Sir Joseph Banks, a British biologist who sailed with Captain Cook.

The breaches in the crater walls led to the formation of two long and thin harbors: Lyttelton to the north and Akaroa to the south. The peninsula also has many other smaller bays and coves, which gives it its unusual rack-and-pinion shape. Christchurch, the largest city on the South Island, is visible immediately north of the Banks Peninsula.

The rugged coastline contrasts sharply with the adjacent Canterbury plains. Stretching some 80km inland from the coast to the foothills of the Southern Alps, visible in the upper left of the image, the lowlands are a rich agricultural region known for wheat and barley, as well as wool and livestock.

The Rangitata, Rakaia and Waimakariri are the main rivers visible in the image that flow south-east from the Southern Alps. The Rakaia River, visible in the center of the image, is one of the largest intertwined rivers in New Zealand. The river travels approximately 150 km before entering the Pacific Ocean. The turquoise colors visible in the ocean suggest the presence of sediments carried into the ocean by the river drain, as well as algae bloom.

Between the Rakaia River and the Banks Peninsula is Lake Ellesmere (Te Waihora). The lake is actually a shallow coastal lagoon, with its emerald green colors most likely due to a high concentration of chlorophyll. The long stretch of land, visible in brown south of the lagoon, is the Kaitorete Spit and is a barrier that separates the lagoon from the Pacific Ocean.

Sentinel-2 is a two-satellite mission to provide the coverage and data transmission needed for the European Copernicus program. Frequent revisits of the mission over the same area and high spatial resolution allow for careful monitoring of changes in internal water bodies.

This image, captured on January 4, 2019, is also featured in the Earth from Space video program. 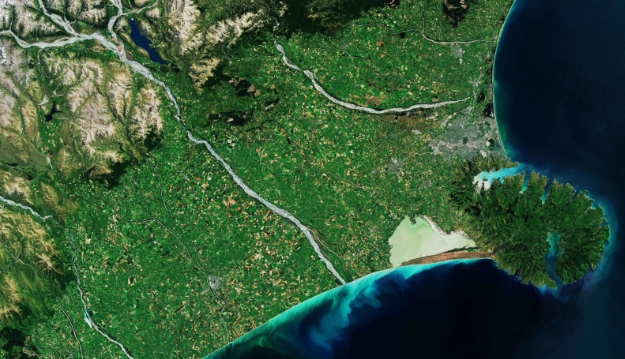