BEIJING – A Chinese flag now soars over the moon in the latest demonstration of the Asian nation’s ambitions in space.

The National Space Administration released an image of the flag, which the state-run Xinhua News Agency described as the “five stars shining” on the moon.

China is the second country to have its flag on the moon. Unlike the 1969 U.S. moon landing, the Chinese flag was planted not by an astronaut but by a machine: the Chang’e-5 lunar lander.

Cheng Chang, the technical director responsible for displaying the lunar flag, said the team spent more than a year selecting the material for the flag to ensure it withstands cosmic rays and the exhausting temperature changes on the moon’s surface. according to Xinhua.

The flag is 2 meters wide and 90 cm high and weighs approximately 1 kg. It had to be implemented in a second to ensure success, Xinhua reports. 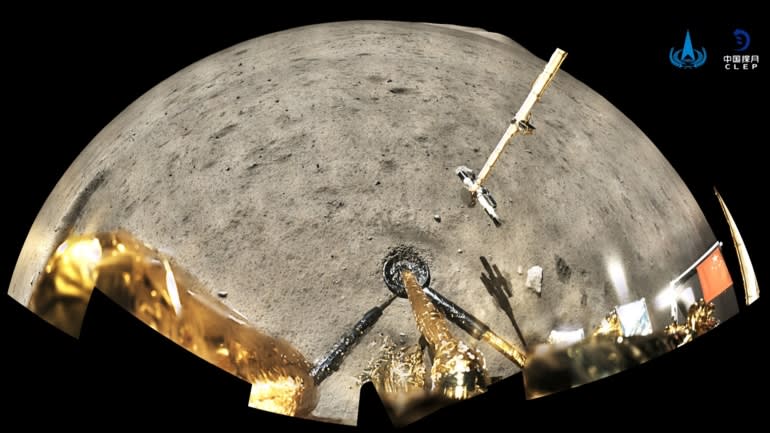 A display system holding China’s national flag, top right, is seen by the Chang’e-5 spacecraft on the moon in this panoramic image provided by the China National Space Administration via Reuters.

The Chang’e-5 lander collected the lunar soil to be returned to earth, the National Space Administration said Thursday. China is poised to become only the third nation, after the United States and the Soviet Union, to accomplish such a feat.

Lunar soil, estimated at between 1.2 and 1.3 billion years, would be the first reported to Earth in 44 years. The samples were collected from the surface and up to about 2 meters below, according to the space agency.

The Chang’e-5 landed on the moon on Tuesday, part of a Chinese space program that aims to build a moon base around 2030 and look for resources there by 2035.