On 8 August, Justin Sun, Tron's co-founder, announced that Tron is on track to overcome Ethereum in terms of daily transactions. The statistics he tweeted showed that on August 6 TRX was traded 128,438 times while Ethereum was traded 636,342 times. 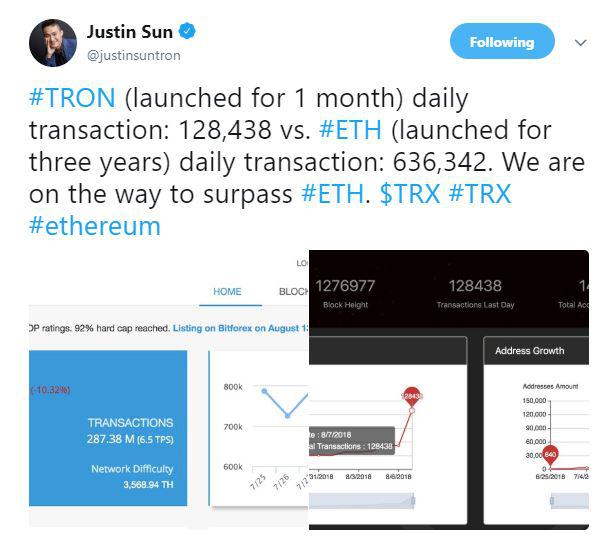 Tron, who is only one month old, has achieved such high trading numbers compared to Ethereum who was in the game for over 3 years.

On May 30, Tron [TRX] launched its MainNet. Later, they launched their Tron virtual machine. The machine is compatible with the Ethereum virtual machine and developers can switch from the Ethereum platform. This was marked as one of the significant moments in Tron's history.

The platform aimed to overcome Ethereum even before the launch of MainNet and this was one of the first steps taken by the Foundation. In addition, the Foundation has also revealed Project Atlas that will allow billions of BitTorrent users to become part of Tron.

Most of the community states that regardless of the ads, there was no positive impact on the value of the currency. TRX has only fluctuated on the cryptocurrency charts, rather than maintaining a stable position. Furthermore, Ethereum Classic [ETC] and Monero [XMR] pushed Tron up to the 13th position.

According to CoinMarketCap, Tron [TRX] was trading at $ 0.024 with a market capitalization of over $ 1 billion. The currency has seen a decline of over 25% in the last 7 days and over 11% in the last 24 hours.

"Obviously this was in preparation for quite a bit of time due to the breadth of expansion and rapid development undertaken by the foundation. Anticipation for the launch of the secret project, or Project Atlas, is a clear indication of the immense wave that Tron has created in the ocean of cryptocurrencies. "

"Ask the price to surpass ETH and we are cooking"