In the race for the COVID-19 vaccine, a Hungarian village company takes a global role 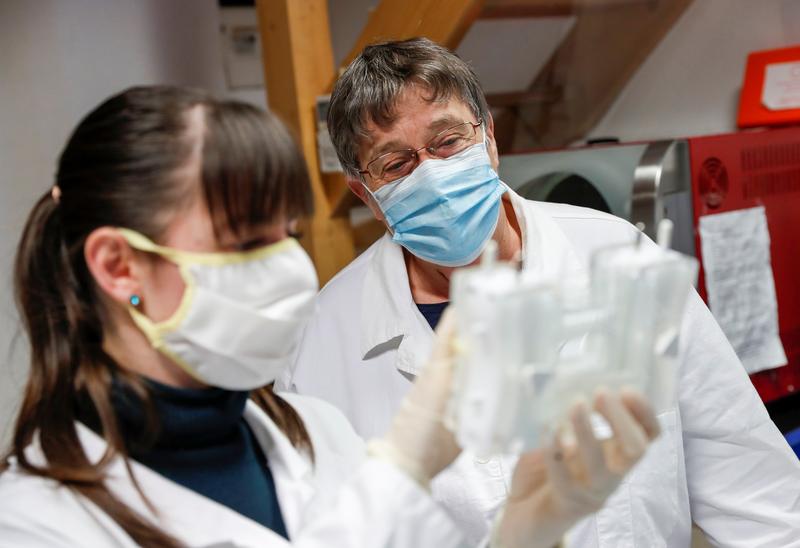 SZIRAK, Hungary (Reuters) – In an unassuming home on rolling hills east of the Hungarian capital, a small family business is helping to lubricate the wheels of the world’s large pharmaceutical companies on the way to a coronavirus vaccine.

Biologist Noemi Lukacs, 71, retired to Szirak, her native village, to found English & Scientific Consulting (SciCons) and produce a genetic sensor so sensitive that a few grams can supply the entire global industry for a year.

“We make monoclonal antibodies,” Lukacs told Reuters in the one-story home where she was born, now partially converted into a world-class laboratory. The white powder is shipped around the world from here, micrograms at a time.

“These antibodies recognize double-stranded RNA (dsRNA),” he explained. DsRNA is a byproduct of replicating viruses, so its presence signals the presence of a live virus, long useful in virus research.

More importantly, dsRNA is also a byproduct of the process used by US giant Pfizer and Germany’s BioNTech to create their experimental COVID-19 vaccine which is more than 90% effective according to the results of last week’s initial trial.

And because dsRNA can be harmful to human cells, it must be filtered out of any vaccine to be used in humans. There are several filtering methods, but the most used way to perform quality control is to expose the vaccine to Lukacs antibodies.

Not only will the antibodies show if there is any dsRNA in the vaccine, they will also tell researchers how much of it is present. The vaccine can only be administered once it has been completely freed from dsRNA.

The result: a line of large pharmaceutical representatives outside his door.

The small company is growing rapidly, but last year its turnover was only 124 million forints (just over $ 400,000), with profits of 52 million forints. This feeds five employees and also leaves some for local charity projects in Szirak.

For Lukacs, that’s fine. The success of the long frowned upon RNA field is proof enough.

The former college professor has closely followed the vaccine rush and has rooted especially for competitors who seem destined to come first: those who use modified RNA to train cells in the human body to recognize and kill coronavirus. RNA was his dog in the race.

The modified RNA, or mRNA, methodology is an entirely new group of drugs, with the COVID vaccine the first product likely to gain regulatory approval and go into mass production. But more applications are planned, which thrilled Lukacs.

“Once you get into the field of RNA, it’s an extremely exciting area,” he said, recalling decades of struggles in which the rest of the scientific community didn’t share his excitement.

Or most of the rest, that is. Another Hungarian woman, Katalin Kariko, who works across the Atlantic, has patented the method that allows the use of RNA and promises to rid the world not just of coronavirus but dozens of other diseases.

In the process, Kariko, now vice president of German BioNTech, which was the first time alongside US giant Pfizer to break through with a vaccine earlier this month, became one of SciCons’ first customers.

The discovery of COVID and other uses of RNA may require more use of Lukacs antibodies as well, but they do not provide much of a benefit.

“We would be happy to sell more,” said Johanna Symmons, her daughter and CEO of the small company. “We probably will too. But it’s not like we’re going to get rich stupid. “

Being part of the solution reaping rewards.

“We have collaborated with most of the vaccine manufacturers, and certainly almost all those who use the mRNA method,” he said with a hint of pride. “We’ve been a little screw in this great machine.”