Original title: The worst bookmaker in history? Using 44 accounts to speculate on a stock, buy and sell of 10.3 billion, a huge loss of 500 million and a fine of 3 million …

It really is a bargain!

An updated administrative fine decision on the China Securities Regulatory Commission website on December 4 shows that between February 28, 2017 and February 22, 2018, the party involved Liu XiaodongEffective controlThe group of accounts involved in the case used ongoing transactions and manipulated transactions between accounts actually controlled by themselves.Demei Chemical“, the cumulative number of shares purchased during the period reached 370 million shares, and the transaction amount reached 10.308 billion yuan.CirculationThe percentage of shares was 42.75% and the total transactionLost529 million yuan. 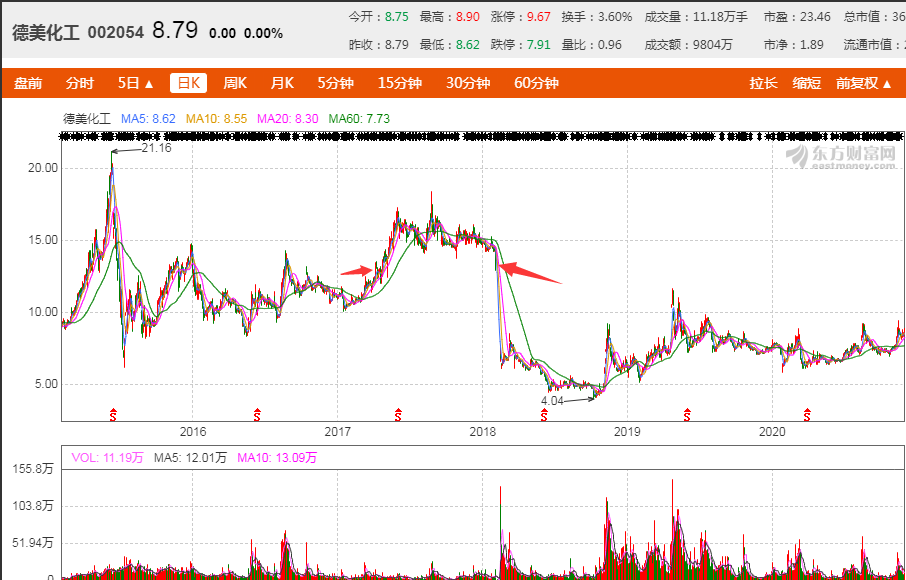 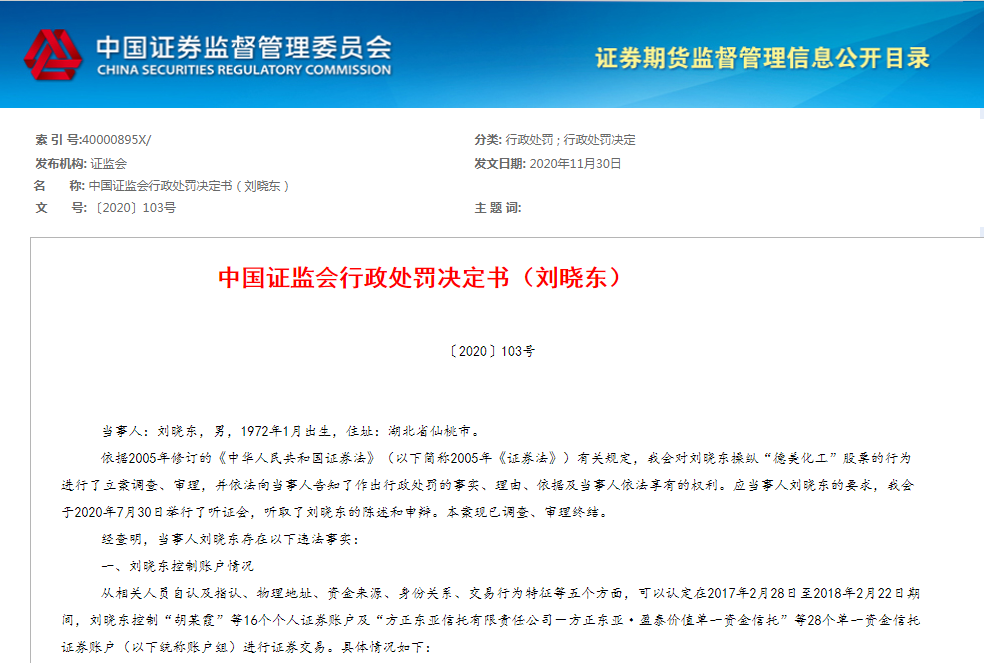 According to the administrative sanction decision, in the period from February 28, 2017 to February 22, 2018, Liu Xiaodong effectively controlled the group of accounts involved in the case and manipulated “Demei Chemical” through ongoing transactions and cross-account transactions that he actually controlled. , Cumulatively purchased 370,166,755 shares,DealThe total amount was 5419371720 yuan, 370.596.755 shares were sold cumulatively, and the turnover was 4888327717 yuan. At the beginning of the period, he held 430,000 shares of “Demei Chemical” and at the end of the period he no longer held “Demei Chemical”. The total loss of the transaction was 529 million yuan.

During the period from February 28, 2017 to February 22, 2018, Liu Xiaodong had the behavior of continuously buying and selling “Demei Chemical” with the advantages of centralized funds and participation in the controlling accounts group. In 242 trading days, the group of accounts held “Demei Chemical”Shares OutstandingQuantity mattersNegotiable sharesThere were 228 trading days with a ratio of more than 5%, equal to 94.21% of 242 trading days, of which the number of tradable shares held on 17 August 2017 reached the highest, 135 million shares , equal to 42.75% of the marketable shares, equal toTotal equityThe percentage reached 32.1%.

Liu Xiaodong actually controlled 44 securities accounts. During the period in question, he traded a large number of “Demei Chemicals” with high frequency. The purchase price and quantity of purchases were abnormally high. Combined with his ongoing business behavior, he conducted transactions between accounts that he actually controlled. Full judgment of the behavior, Liu Xiaodong’s intention to manipulate “Demei Chemical” is obvious.

The above illegal facts, relevant information on opening securities accountsCash flowEvidence such as water, commissioned transaction flow, IP / MAC address, transcripts of personnel inquiries and transaction data provided by the exchange are sufficient to confirm.

The Securities Regulatory Commission believes that based on the facts, nature, circumstances andsocietyUnder the provisions of Article 203 of the 2005 Securities Act, the CSRC decided to impose a fine of 3 million yuan on Liu Xiaodong.

The market ban decision letter from the Securities Regulatory Commission website shows that Liu Xiaodong will be banned from the life securities market. Starting the day the Securities Regulatory Commission announced its decision, within the period Prohibited, no one may continue to carry out securities business in the original institution or serve as the original listed company or unlisted company.publicDirectors of the company,SupervisorExcept for senior management positions, you are not permitted to engage in securities business in other institutions or perform functions as directors, supervisors or directors of other listed companies or unlisted public companies.

Solemnly declares: the purpose of this information is to disseminate more information, and it has nothing to do with this stand.