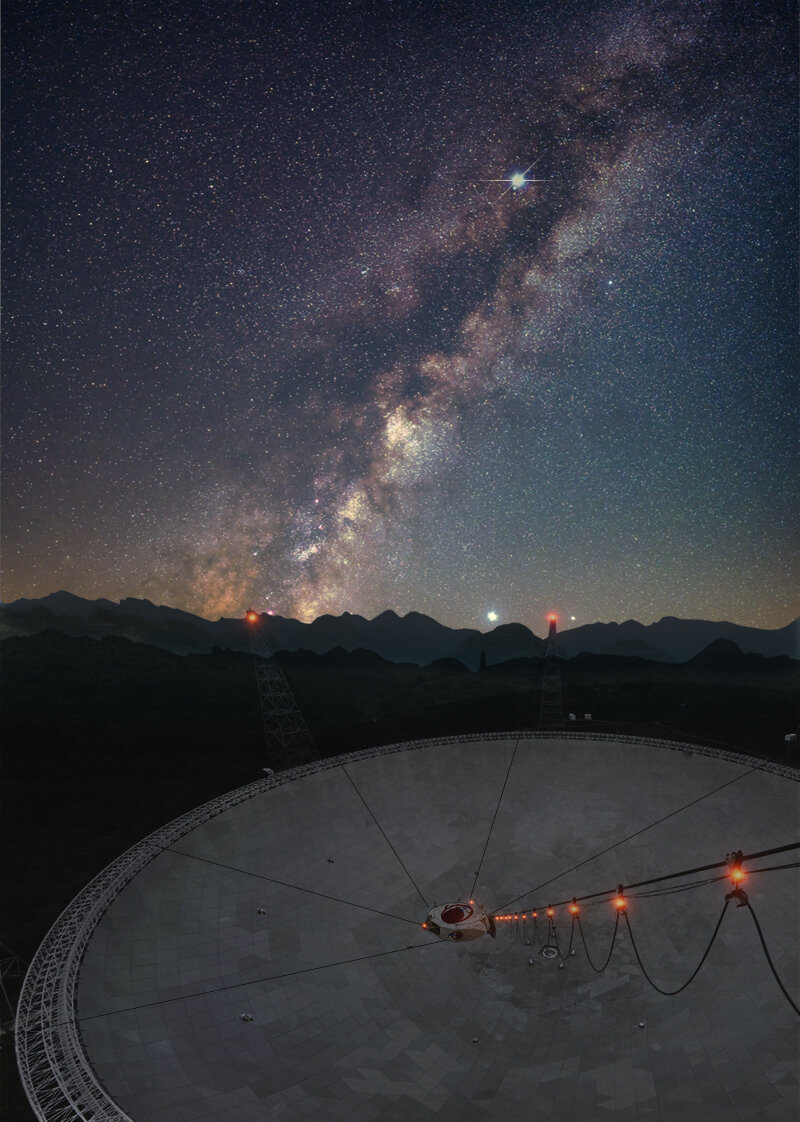 Fast radio bursts, or FRBs, powerful radio waves lasting milliseconds from deep space outside the Milky Way, have been among the most mysterious astronomical phenomena ever observed. Since FRBs were first discovered in 2007, astronomers around the world have used radio telescopes to track the explosions and look for clues as to where they came from and how they are produced.

UNLV astrophysicist Bing Zhang and international collaborators recently observed some of these mysterious sources, which has led to a series of groundbreaking discoveries reported in the journal Nature that may finally shed light on the physical mechanism of FRBs.

The first article, for which Zhang is a corresponding author and a leading theorist, was published in the October 28 issue of Nature.

“There are two main questions about the origin of FRBs,” said Zhang, whose team performed the observation using the five-hundred-meter spherical telescope (FAST) in Guizhou, China. “The first is what are the engines of the FRBs and the second is what is the mechanism for producing FRBs. We have found the answer to the second question in this paper.”

Two competing theories have been proposed to interpret the FRB mechanism. One theory is that they are similar to gamma-ray bursts (GRBs), the most powerful explosions in the universe. The other theory compares them more to radio pulsars, which are spinning neutron stars that emit bright, coherent radio pulses. GRB-like models predict a non-variable angle of polarization within each burst, while pulsar-like models predict variations in the polarization angle.

The team used FAST to observe a repeating FRB source and discovered 11 bursts from it. Surprisingly, seven of the 11 light bursts showed different polarization angle swings during each burst. The polarization angles not only varied in each burst, but the variation patterns were also different between the bursts.

“Our observations essentially exclude GRB-like models and offer support for pulsar-like models,” said K.-J. Lee of the Kavli Institute for Astronomy and Astrophysics, Peking University and corresponding author of the article.

Four other FRB papers were published in Nature on November 4. These include several research articles published by the FAST team led by Zhang and collaborators from the National Astronomical Observatories of China and Peking University. Researchers affiliated with the Canadian Hydrogen Intensity Mapping Experiment (CHIME) and the Survey for Transient Astronomical Radio Emission 2 (STARE2) group also collaborated on the publications.

“Just as the first paper advanced our understanding of the mechanism behind FRBs, these documents solved the challenge of their mysterious origin,” explained Zhang.

Magnetars are incredibly dense city-sized neutron stars that possess the most powerful magnetic fields in the universe. Magnetars occasionally emit short X-rays or soft gamma-ray bursts through the dissipation of magnetic fields, so they have long been hypothesized as plausible sources for powering FRBs during high-energy bursts.

The first conclusive proof of this came on April 28, 2020, when an extremely bright radio burst was detected by a magnetar sitting right in our backyard, about 30,000 light-years away from Earth in the Milky Way. As expected, the FRB was associated with a bright flash of X-rays.

The event was detected by CHIME and STARE2, two arrays of telescopes with many small radio telescopes suitable for detecting light events from a large area of ​​the sky.

Zhang’s team has been using FAST to observe the magnetar source for some time. Unfortunately, when the FRB occurred, FAST was not looking at the source. Nonetheless, FAST made some interesting “non-detection” discoveries and reported them in one of the Nature articles. During the FAST observation campaign, there were another 29 x-ray flashes emitted by the magnetar. However, none of these explosions were accompanied by a radio blast.

“Our non-detections and detections by the CHIME and STARE2 teams paint a complete picture of FRB-magnetar associations,” said Zhang.

To put it all in perspective, Zhang also worked with Nature to publish a single author review of the various discoveries and their implications for the field of astronomy.

“Thanks to recent observational findings, FRB’s theories can finally be critically reviewed,” said Zhang. “The manufacturing mechanisms for FRBs are greatly reduced. However, many questions remain. This will be an exciting field for years to come.”

Provided by the University of Nevada, Las Vegas