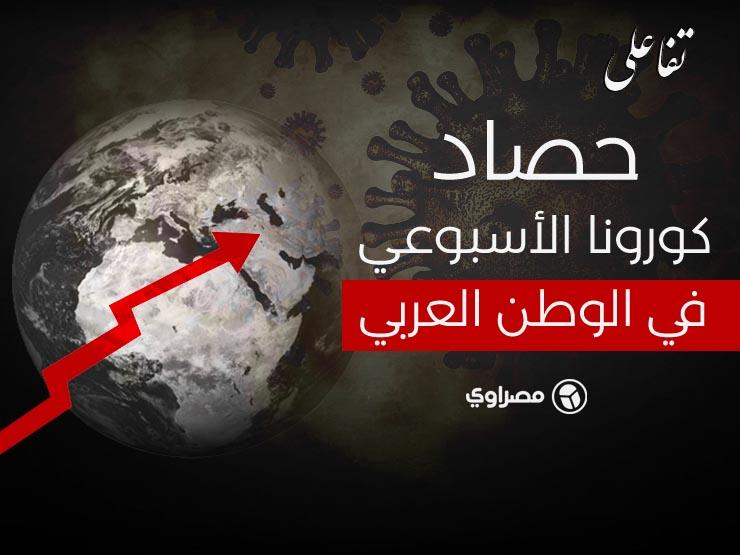 Most Arab countries have begun to implement further measures to coexist with the Coronavirus “Covid-19” and continue to reduce the precautionary measures they have taken over the course of 3 months to limit the spread of the virus; That continues to infect thousands and kill hundreds globally and regionally, which is reflected in the scale of injuries and deaths in Arab countries this week, which ends on Friday.

In this data-driven report, we monitor this reversal, through numerical analysis, through charts and maps.

Countries in the Arab world have recorded 410,234 injuries, as of last night, with an increase of 22.5% compared to last week, while deaths have increased to 5 thousand and 401 cases, an increase of 24.5% compared to the last week, despite this, the rate curve of weekly increases in each of the injuries and deaths saw a notable decrease, especially in the death rate, which has seen a significant increase in rates of increase in recent weeks.

The Kingdom of Saudi Arabia continues to be at the forefront of the total number of injured in Arab countries, having surpassed 100,000 injured this week, while the Comoros Islands top the index.

Egypt, Saudi Arabia and Algeria – in order – top the death rate, with 57% of the death toll in the Arab world, due to the Corona virus.

Despite this, Yemen, which recorded only 136 deaths, outperformed the three countries in terms of the death rate of total injuries, where 23% of the number of injuries died, followed by Algeria with 7%.

In Egypt 3.4% of the total wounded died, preceded by Sudan, Mauritania and Tunisia.

The number of countries that did not announce the total number of “pcr” tests they conducted increased to 8; “Egypt, Syria, Mauritania, Yemen, Sudan, Algeria, Djibouti and Comoros, and” pcr “is the only test recognized by the World Health Organization to confirm Coronavirus infection.

While the percentage of total injuries from the number of tests in the countries that announced them has stabilized, reaching 5.7%, and the total number of tests reached 6 million, 96 thousand and 71 tests.

The UAE continues to be the first in terms of total number of PCR tests among Arab countries to monitor those infected with the virus, as it has conducted 2 million and 626 thousand tests, an increase of almost half a million tests compared to last week.

Libya tops the index with 11,765 PCR tests, according to WorldMeter, an independent international website based in the United States of America, set up by a group of developers in several countries, with the aim of making international data available in all data.

During this week, infections increased in three countries, namely Iraq, Mauritania and Syria, and the rate of infections increased in other countries that had seen stability for long periods, such as the Kingdom of Saudi Arabia, Jordan and Tunisia, which announced its control of the virus in an official statement mid-week but returned to its last days to re-register injuries.

This came after most Arab countries saw a relaxation of precautionary measures to deal with the Corona virus, as shown in the following map.