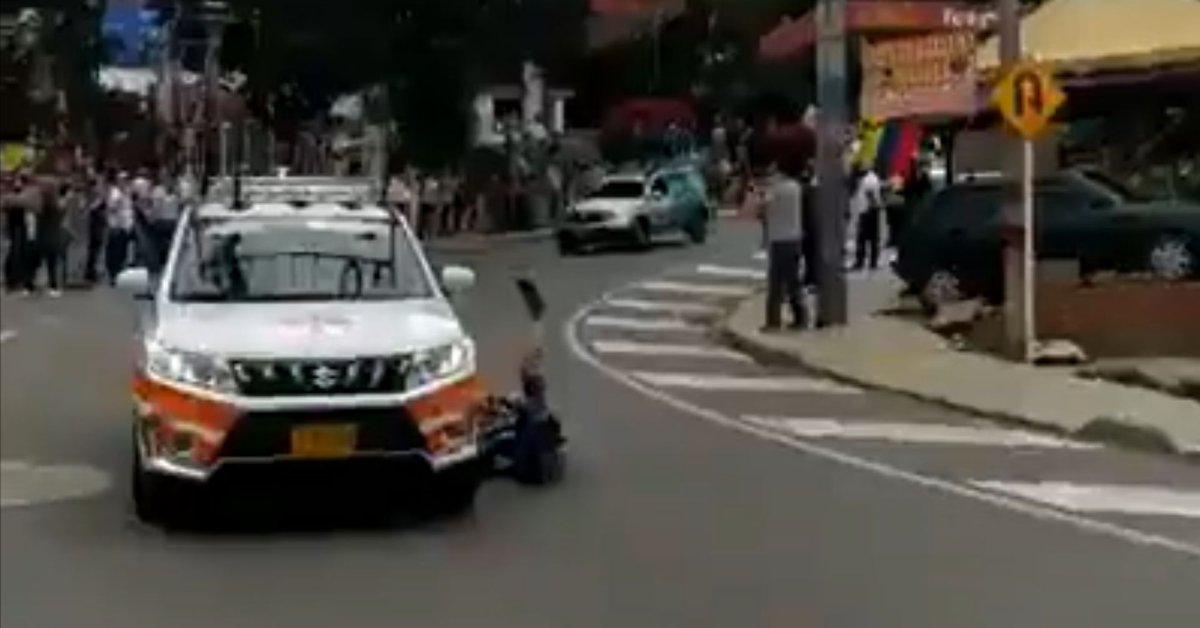 It almost ended in tragedy: the young rider Jerónimo Bedoya, of the ‘Talentos Colombia’ team, which participates in the Vuelta a Colombia, suffered an accident that he will remember for a long time, in a curve he lost control of his iron horse and, baby , a car would take his life.

It was a matter of seconds between the cyclist’s imbalance in a pronounced curve, the appearance of the vehicle, and the skidding of the rider and bicycle between the caravans following the athlete’s lot. It looked like a tragic accident was about to happen.

The spectators who attended the stage recorded the anguish on video, with shouts from both sides, while Bedoya, without control of his bicycle, had a last second of respite thanks to the determined action of the rider, who managed to brake, and thanks to His experience he avoided a tragedy that would have mourned a traditional Vuelta among Colombian fans.

Bedoya’s reaction after the fright was to rejoin the team again and try to make up for the lost time, reaching the finish line in full, where he was expected by the members of his team, who still can’t believe that U23 is out. I’ve lived a life like that. accident.

The Vuelta a Colombia is driven by Alexander Gil, sprinter of the EPM team, who defends his jersey on the fourth day, to be played on this festive bridge in the city of Ibagué: the route is 100 kilometers, crossing the streets of the musical city of Colombia. Bedoya is 32 minutes away in the individual classification of the Vuelta, but he is alive and ready to fight to improve his times in the most important cycling race in the country.

The accident did not become serious, but reflects the safety conditions in which the sporting event takes place.

Though fortunate in its determination, the drivers’ recklessness in the Vuelta has a long history dating back to its foundation. Only in 2018 an absurd accident cost him several minutes and injuries to his champion: Cala Aristobulus.

A motorcyclist rammed the group, interrupting the race and injuring Cala and three other wingmen who accompanied him to the municipality of El Cármen de Viboral, in Antioquia. Defined as his responsibility in the accident, the motorcyclist said he didn’t know the race was taking place in the municipality.

While ignoring the signs that caravans use to warn of the passage of cyclists, sometimes they are the same passers-by who cross in the race, often motivated to refresh the cyclists and encourage them on the hard slopes that characterize them. the Vuelta.

In the previous century, there have been many incidents involving legendary characters such as “Cochise” Rodríguez OR Alvaro Mejia, which had fans cheering them on every time they passed through Colombian communes. Of course, generating small traffic accidents that caused delays on Colombian roads.

Bedoya’s, mediated by luck, is still historic: his life, safe, and the Vuelta with another anecdote to tell.

This is how San Andrés, Providencia, Santa Catalina and the nearby keys experience the passage of Hurricane IOTA

Warning: these will be the cities that will not have electricity or water in Bogota

Carlos Queiroz upset over arbitration against Uruguay: “There is a disease that has come to football, I call it ‘COVAR’