Ripple released his second blog in the three-part series of "The Case for Digital Asset Regulation" on Monday. Here, he worked out the FinTech scenario in the ASEAN region of the world, particularly in Thailand. He also discussed the events and the approach taking place in the Middle East and, more specifically, in Abu Dhabi. 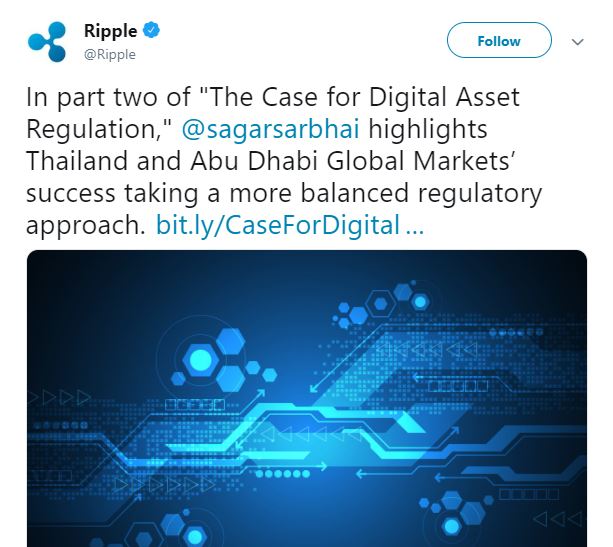 In the first part of the series, Ripple dissected the issues related to the Mt Gox hack and the progression of the cryptocurrency space in Japan through the country's regulatory approach. In the last piece, the company conducted a similar exploration, but in Thailand and Abu Dhabi.

Regarding Thailand's journey to define a regulatory framework for digital resources, Ripple said that the country initially chose to prohibit traditional banks from offering their services to platforms that deal with digital resources.

However, Bank of Thailand [BoT], the central banking authority of Thailand, soon realized that the respective asset class is imperative to its goal to emerge as the FinTech hub in the ASEAN region. Thus, the top financial authority went to more progressive methods to deal with the situation by carving out rules that pushed for innovation and encouraged investment in space.

Subsequently, Ripple identified the global markets of Abu Dhabi [ADGM]The attempt to become a dominant figure in the FinTech revolution of the Middle East. ADGM is an international financial center that, like BoT, has formed a regulatory framework for the digital asset class. The main reason for ADGM's move was the promotion and prosperity of the digital asset hub in the Middle East for the FinTech industry.

In the blog, it was also mentioned that Thailand has brought currencies and digital assets closer to protect the interests of investors and has constantly moved towards the promotion of the asset class. On the other hand, the financial center of Abu Dhabi has skipped the stages of acceptance and has moved on the path of creation and promotion.

"The moment of rippling is catching up!"

Another user, Rémi Férat, also encouraged the ecosystem and wrote: