Playstation 5 in the test: what the PS5 can do and for whom it is worth buying it 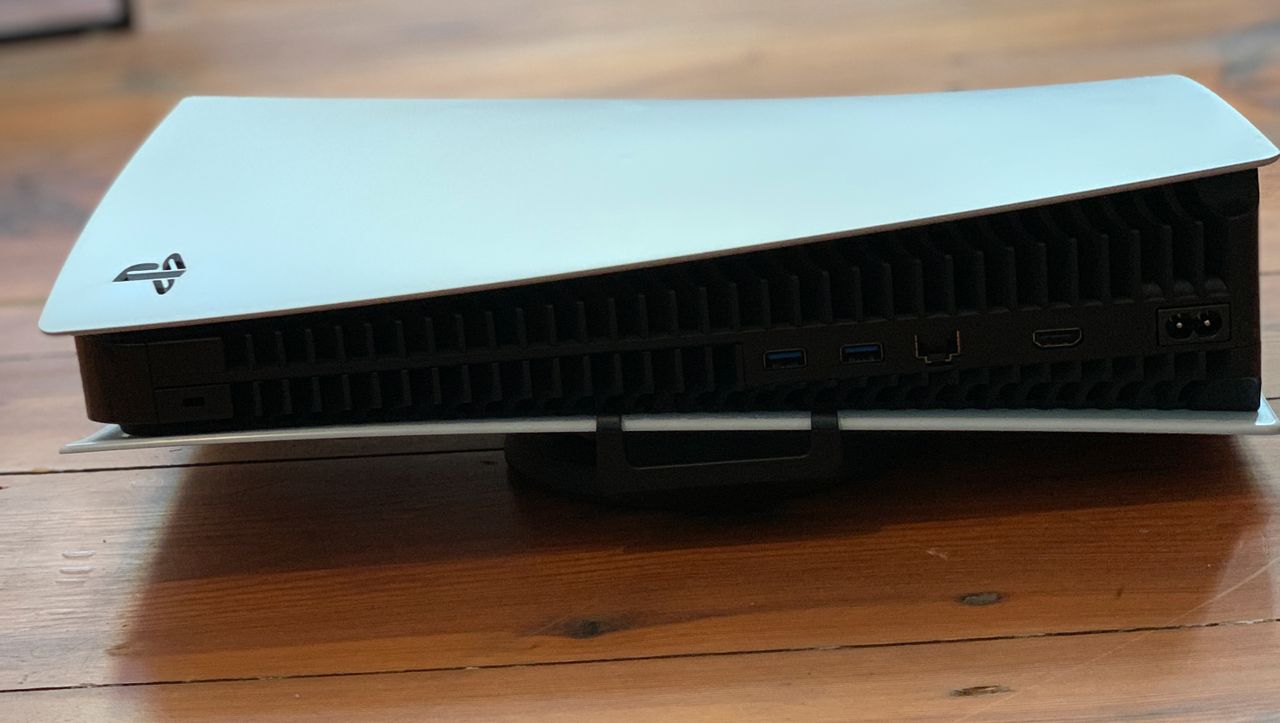 Instead of improved graphics or a controller with new functions, the first thing you notice about the new Playstation 5 is its size. But a closer look at the console shows that it should be worth, at least for some gamers, to make room in the TV cabinet for Sony’s new console.

The Playstation 5 will be on sale from November 19th. As announced by Sony, it will only be available online on the day of release on Sony’s sales partner websites. With the crown pandemic in mind, the company asked customers not to go to local stores in hopes of getting a console there.

The price for the console is 499 euros or 399 euros. Depending on whether buyers opt for a model with or without a Bluray unit. Those who opt for the latter model must purchase the games in purely digital mode.

Anyone who tries the Playstation 5 will particularly notice three new features that set the console apart from its predecessor. These are the aspects that interested buyers should particularly consider when evaluating whether Sony’s new console is useful for them.

Unsurprisingly, the graphics of a new console are superior to the previous model. It’s the same with the Playstation 5 with 4K resolution, 60 frames per second and ray tracing technology. Even in the early games it became clear that the console had more to offer than the Playstation 4.

This can be seen with more dynamic lighting through ray tracing in “Spider-Man: Miles Morales”. Or in a higher field of view, when players, standing on a skyscraper, look into the distance. It can be seen in the particles of gigantic explosions or the voluminous plumes of steam blowing from the subway ducts. This advantage in terms of graphics power makes the worlds seem more alive. However, there should be no graphical jumps, as in the case of switching from Playstation to Playstation 2.

The Playstation 5, on the other hand, makes a very big leap in terms of loading time. Because here it comes close to what gamers might still know from cartridge-based consoles like the Super Nintendo: you can just start playing. The new specially developed SSD hard drive allows, for example, to start “Spider Man: Miles Morales” cold in less than ten seconds, to access the menu screen, to select a save point and to find yourself in the game world. It takes less than two seconds from the game menu to the open world.

The sometimes minutes of waiting, looking at the loading screens with more or less useful tips are no longer necessary. The Playstation 5 does not have a “Quick Resume” feature like the Xbox Series, which allows you to quickly switch between games. However, this is bearable with these loading times.

This is what the Playstation 5’s DualSense looks like

The new DualSense controller of the Playstation 5 sits very comfortably in the hand. It’s only slightly larger than the Dual Shock 4, has the same arrangement of controls, and is easy to use with small and large hands.

But two aspects make it stand out: the haptic feedback ensures that the controller’s rumble function is much more differentiated. Through the different strengths and the position of the respective vibration in the controller, the experiences in the game can be perceived more clearly.

Additionally, there are adaptive activation buttons which give different levels of resistance. There are a number of situations where Dual Sense can make a difference, such as when braking hard or lifting a heavy object. The new controller isn’t a revolution in game design, but it does offer interesting accents that can make a game experience more complex.

In principle, the old Dual Shock 4 can also be used with the Playstation 5. It only works if the “PlayStation 4” games are played on the new console. This is basically possible, because Sony’s new console is backwards compatible with PS4.

The user interface of the Playstation 5 has not changed radically in terms of appearance and usability. Playstation 4 users will quickly find their way. But there are new settings and features that are primarily concerned with usability and accessibility. We present some of the new features in more detail in the following series of images:

The new functions of the Playstation 5

The console and its connections

First of all, as mentioned, the console is great. 40cm high, 26cm deep and 9cm wide at the widest point. It weighs 4.5 kilos.

The console can be positioned horizontally or vertically and comes with a foot that must be fixed in both cases. The installation is very simple. Depending on the mode, the console glows blue or orange, for active or standby.

It’s gratifying that the console makes barely audible noises. Where Playstation 4 (Pro) fans still produced a lot of volume, there is almost silence here. What functions should a TV have and more details about the new console are shown in the following series of photos:

Both the version with and without Bluray drives are equipped with the SSD specially developed by Sony. This actually offers 667.2 gigabytes of storage. That’s a little less than the PlayStation 4 Pro, which could store 862 gigabytes of data.

The main thing about a console – games

Of course, the attractiveness and relevance of a new console either goes or wanes with games. Before this meeting, we were able to play “Spider Man: Miles Morales” and “Astro’s Playroom”. When the console is released, “Demon’s Souls” and “Sackboy: A Big Adventure” will also appear as PlayStation-exclusive games, as well as some cross-platform games that we will discuss later.

This is what Spider Man looks like: Miles Morales and Astro’s Playroom

The new game “Spider-Man” tells the story of Miles Morales. It is an add-on to the main game released in 2018. Therefore it is less extensive and costs 20 euros less than other exclusive games. These will cost around 80 euros for the Playstation 5, which means a significant price increase.

“Spider-Man: Miles Morales” sounds great. It supports two graphics modes, through which gamers can choose whether they prefer performance (higher frames per second) or image quality (4K and ray tracing). Like the original game, Miles Morales is a very entertaining action game set in a beautiful open world. The combat system is complex and fun at the same time.

The story has some twists and turns and there is no shortage of collectibles in the open game world. In short, if you liked “Spider-Man”, you will also love “Spider-Man: Miles Morales”. However, gamers also have the option to play on Playstation 4. There is, however, in less opulent graphics and with significantly longer loading times.

Similar to a “Wii Sports” for Wii, “Astro’s Playroom” offers the opportunity to try out the new functions of the “Dual Sense” controller. And it’s really a lot of fun. The Jump’n’Run shows in different areas, each full of references to other Sony consoles and games, how you can use haptic feedback and adaptive triggers. For example, getting players to hit the right resistance to perform a perfect jump.

“Astro’s Playroom” is pre-installed on every Playstation 5, so it can be played directly after purchasing the console. It’s a fun game with some interesting ideas and enough substance to be fun in the long run.

The Playstation 5 is an exciting technology with great potential. Especially the almost non-existent loading times (in the games we were able to test) as well as the subtle but noticeable innovations of the controller and the exciting UI features of the console form an extremely solid foundation for the next few years. Graphics power may be slightly less than the Xbox Series X. It remains to be seen to what extent this will make a significant difference over the years.

The potential of the Playstation 5 lies in the games that will appear over the years. The question will be whether these games will take full advantage of what the console has to offer. Some very promising titles have already been announced for the next few months: “Demon’s Souls”, “Horizon Forbidden West” or “Ratchet & Clank: Rift Apart”.

If Sony continues on the path it took on Playstation 4, that is, it highlights high-quality AAA games that have mostly extensive single-player modes, fans should hardly miss a thing. The console is supported by all major cross-platform studios. For people who have skipped the Playstation 4, there are also hundreds of games available on the console that can also be played on the Playstation 5. Some even come with patches that improve performance.

Many games, such as “Spider-Man: Miles Morales” or “Horizon Forbidden West”, are available for both the new and the old Playstation console. So if you can live with less impressive performance, you can confidently wait to buy the Playstation 5 and settle for the Playstation 4. After all, the 400-500 euros that Sony’s new console costs is no small price, however reasonable. can be. Also, there are costs for much more expensive Sony exclusive games.

But if you want to jump straight to a new generation of consoles, are primarily interested in Sony’s hit games and want a machine that also gets all the cross-platform games, this console can be recommended to you.