How the Noah project faces a declining market 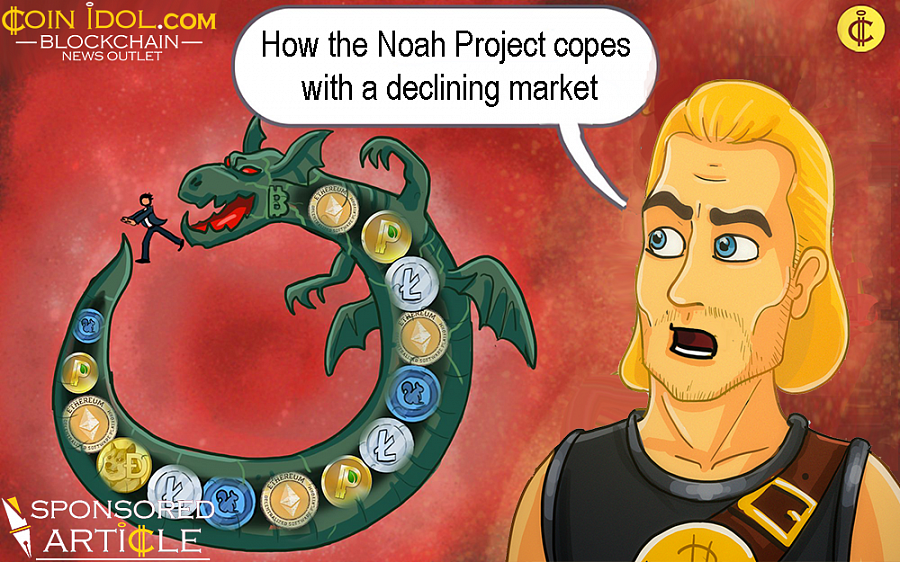 Analyzing the overall summer performance, we see the market in drastic decline. During the three-month period, it had declined by $ 106 billion, the Bitcoin exceeded $ 8,000 and then fell below $ 6,000 while most of the altcoin has declined to its annual low. In fact, the cryptocurrency market lost 36% of the price in the 11 weeks and reported the historic low in November. However, the decline is not an obstacle for the projects that are developing the products and reaching the milestones set in the roadmap. Especially when they are widely supported by the global crypto community. The Noah Project is among these companies.

Despite the fact that the summer was hard and mostly marked in "red", Noah Coin has experienced several peaks. Its market capitalization jumped to $ 94,611.371 on June 12th, and then skyrocketed to $ 124,032,495 on August 30th. The Noah team enthusiastically took this news because the growth of capitalization means that the contributors are interested in this token and the Noah Project that will use Noah Coin extensively in its ecosystem.

The main objective of this Asian startup is to introduce innovative technologies for people and to bring social innovation through blockchain. The founders will realize the entire ecosystem based on their token that will include the first crypto city, an elegant Noah Resort where travelers will be able to carry out transactions in Noah Coins, in addition to the solution for quick and easy remittances, and more.

One of the most exciting and unprecedented goals is to create a true cryptographic hub in Asia. The Noah Project team is building an encrypted paradise for all blockchain fans called Noah City. It will become part of Horizon Manila, the future largest commercial district of the Philippines. Its citizens and guests can purchase various services and goods for their Noah coins and get all the possible benefits, including discounts and loyalty programs.

The project team has other far-reaching plans to build a magnificent resort in Zamboanga del Norte. To this end, the founders collaborate with Dakak Beach Resort, famous for its horizonless sandy beaches, pure sea air, stunning countryside and breathtaking sunsets. Guests will have exclusive access to a large number of services and services such as various sports activities, relaxing procedures and many other things, which they will be able to obtain with Noah Coins. Thereby,
the Noah Project will intend the tourism industry and will make crypto and blockchain-friendly, opening up new opportunities for travelers.

Noah City and the luxury resort are not the only projects that the Noah team focuses on. Using innovative technologies, the Noah Project also works to facilitate economic and social growth. The founders have developed the remittance system that allows Filipino workers abroad to send money to their relatives faster, cheaper and more easily. Thanks to blockchain technologies, transaction costs can be reduced to 2-3% instead of the current 10%. In this way, the project provides real value literally to millions of people working in foreign countries to support their loved ones at home.

To make the remittance process even more convenient, the project team developed the Noé Wallet, allowing Noah Coin owners to easily manage their digital assets. In addition, Noah Coin transactions are available through PayRemit, one of the largest payment gateways in the Philippines. It opens the door to a wide range of products and services that Noah Coin owners can purchase in the PayRemit network stores.

The Development of Leaps and Bounds

The Noah team has really done its best and made exceptional progress this summer. First of all, the Noah Project
was presented on Sky News Business, one of the largest television channels in Australia. Josef Werker, the project's spokesman, was invited as a guest to the first television program dedicated to blockchain companies. The public was able to watch the peak of the future Noah Resort. More than 40 million viewers may have seen Coincast TV's main episode!

Recently, the Noah Project has made another real breakthrough: its currency has been quoted
CoinPayments one of the world's largest processing platforms that supports over 880 cryptocurrencies and allows merchants to accept digital resources worldwide. From now on, sellers can easily integrate payments into Noah Coin, while its owners can have fun using it.

CoinPayments has become the seventh platform in which Noah Coin holders can exchange their tokens and get many benefits such as loyalty programs, special discounts on purchases and direct access to other Noah ecosystem facilities. Remember that Noah Coin is available on HitBTC, Changelly, BTC-Alpha, Mercatox, Livecoin and YoBit.

"Our goal is to create a world without borders through blockchain and cryptocurrency for everyone – cryptic enthusiasts, business people, travelers, for people all over the world," comments the Noah team. "We make every effort to achieve our goal and conquer new peaks in the development of the project".

The Noah Project is a very eloquent example of the fact that no obstacle would prevent an idea with clear objectives to be developed and succeeded. Even when the market is in decline, you can make the most of this situation and find a real gem in a large number of projects. Do not hesitate and join the ambitious Noah team right now!

To learn more about the Noah Project, ask questions to the Noah team and get the latest updates, join the official
Chat of Telegram follow the project
Facebook e
Twitter . Welcome on board!

Exclusion of liability. This article is paid for and provided by a third-party source and should not be considered as an endorsement by CoinIdol. Readers should do their own research before investing funds in any company. CoinIdol will not be responsible or liable, directly or indirectly, for any damage or loss caused or alleged to be caused by or in connection with the use or reliance on such content, goods or services mentioned in this article.