Bitcoin [BTC] bomb attracts the attention of all the United States and Canada: NYPD says probable "not credible"

Bitcoin, the largest cryptocurrency in terms of market capitalization, which is popularly called the most preferred currency by criminals and tax evaders, has managed to capture the attention of US authorities in an alleged case of bomb fright.

According to reports, an e-mail was sent to various institutions, including hospitals, by authors who said that a bomb was brought into their business premises, adding that it could not damage the support building. He also said that several people will fall victim to the explosion if a specific request is not met; payment of a ransom in Bitcoin.

The mail was followed by the perpetrator stating that if 20,000 USD were not paid in Bitcoin as a ransom, the bomb will be detonated. The mail also said that payment should be made by the end of the day and if the payment is delayed, the bomb would be detonated.

This particular incident seems to have blocked the United States, with several places being evacuated and the authorities intervened to investigate the case. Furthermore, since the investigation is underway, it was considered that the threat is not credible and that no bombs or explosives have been found so far.

"Please be informed – an e-mail containing a bomb asking for payment of bitcoins is circulated, while this email has been sent to several locations, searches have been conducted and no DEVICES have been found."

"At the moment, it seems that these threats are meant to cause interruptions and / or get money. We will answer every call regarding these emails to conduct a search, but we wanted to share this information so that the credibility of these threats can be assessed as probable NOT CREDIBLE "

"Bitcoin-spam-scammers have gone from false threats of blackmail to false bomb threats – so far no one has paid anything to the address and I suspect it will remain that way." 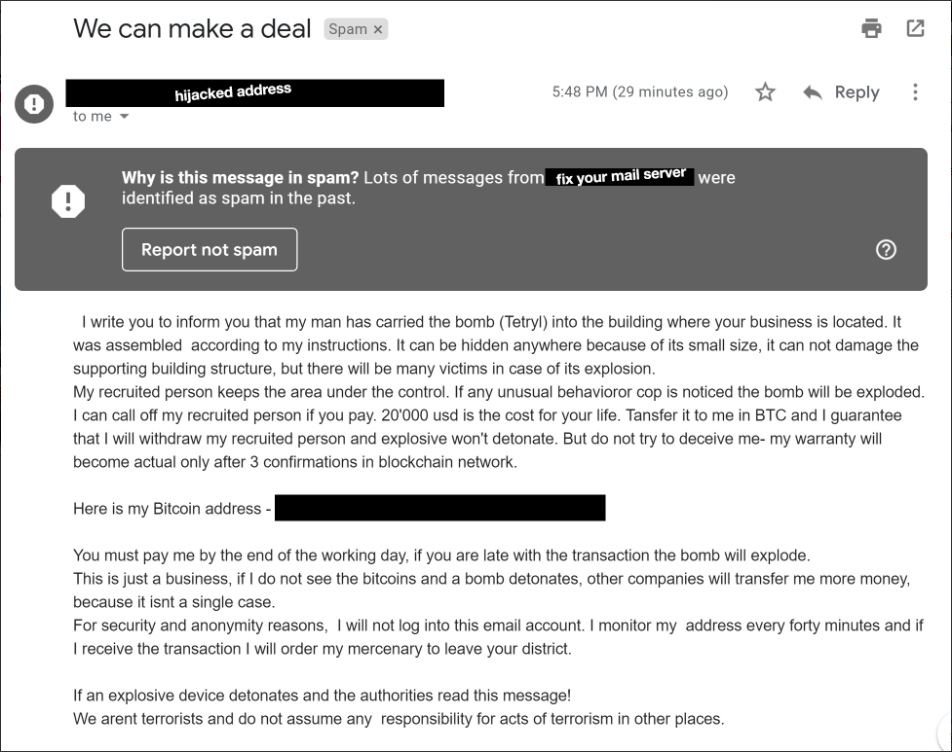 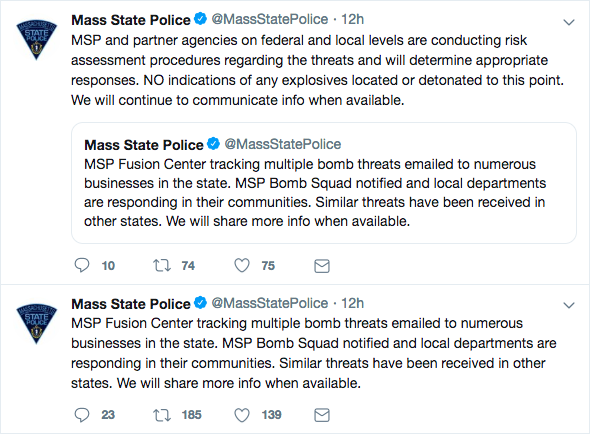 Statement by the Massachusetts State Police on the accident Source: Twitter

"ONLY A – Washington DC @MayorBowser confirms the wave of NON-CREDIBLE bomb threats • ALL have been sent by e-mail • Requested a Bitcoin ransom • No explosive devices found in DC. Declaration by the mayor below: "

Official declaration by the mayor of Washington | Source: Twitter

In addition, according to the latest announcements, the United States is not the only place to receive the threat, Canada has also joined the perpetrator's mailing list. The Ottawa police also issued a statement stating that several companies have received the threat of the bomb. The Ottawa police said:

"The threat of unsolicited e-mail to local businesses and individuals requires payment in some way.If you were the recipient of such an e-mail threat, please do not answer the question of money bits. to make a report with the Ottawa police at 613-236-1222 ext 7300. "