The fact is that member banks want to pay no more to access the new GPI SWIFT. For their part, Ripple through Brad Garlinghouse, are not looking for a SWIFT-Ripple partnership despite the Ripple officials participating in the SWIFT Sibos conference. In a recent interview with Bloomberg, Brad Garlinghouse made it clear that their daily efforts were aimed at replacing SWIFT.

"Our competition is this banking consortium that met in 1973 … It's called SWIFT … You know what it's not? It's not" fast "! It takes 3-5 days to move money … It's a message One-dimensional … It has a 4% error rate … Sends a message to move money, and then you wait, and maybe you get something … It's more like a traveler pigeon rather than a text message or a & # 39 ; email. "

reported: SWIFT kicks off Iran – a country that responds with a public cryptocurrency

SWIFT is available from sometime now. Based in Brussels, the 40-year global payment system is owned by the banks. However, their messaging platform and products connect over 11,000 banks, security organizations, key market infrastructures and corporate clients spread across 200 countries. Even if they are late, they are taking steps to counter Ripple's solutions by updating their GPI. In this way, member banks gain access to complete payment information, end-to-end tracking, speed and improved efficiency.

However, considering the low adoption rate, from the 11,000 members of the banking system, it is estimated that 200 have updated and are actively using GPI, Ripple is increasing partnerships and reducing market share from the dominant player. In six years, the number of banks using xCurrent and other Ripple solutions continues to increase day by day. As the company focuses on improving the efficiency of cross-border transfers of funds in emerging economies, it is undoubted that their superiority will help confirm Brad Garlinghouse's vision. After all, in a year Ripple Net will feed the $ 637 billion Chinese e-commerce business.

Trading at 50 cents, XRP / USD losses are low. It fell 8.7 percent in the last week and three percent in the last day. But here's the point: XRP / USD is actually stable. The recent declines appear enormous because prices have changed in the last two days. Everything else is constant and, unless there are losses below important levels of support, every minimum should be another opportunity to enter with a discount. 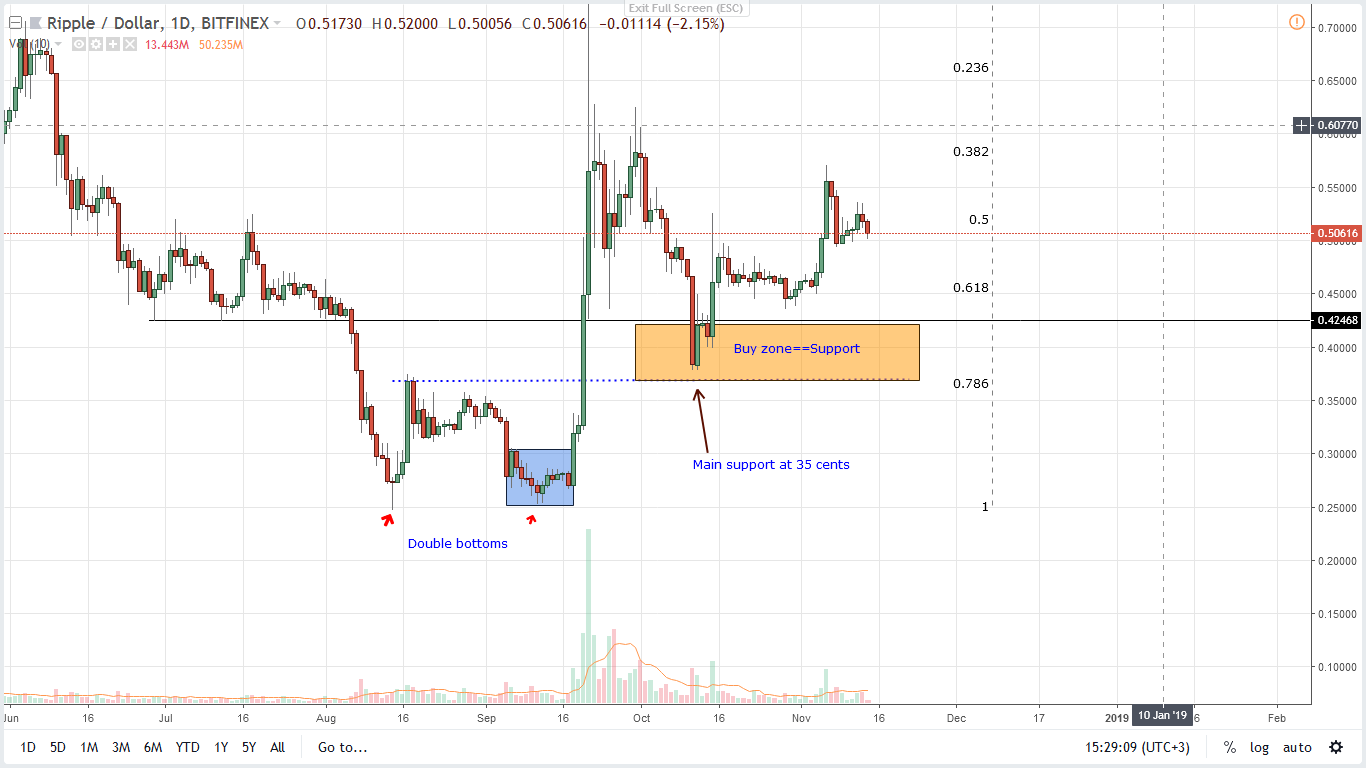 A simple trendline linking the recent lower lows indicates that XRP / USD is indeed bullish. Despite the rejection of higher highs above 60 cents, the September 2018 price action pushed prices above the multi-level resistance at 30 cents, 40 cents and 55 cents. For this reason, we will maintain a positive outlook knowing very well that the XRP / USD is bullish. This is until prices are above our support zone in the area of ​​35 cents-40 cents.

One standout in the daily chart is increasing the volumes of the week until September 23rd. The volumes have gone from around 150 million between 18 and 750 September to 21 September. Since then, volumes have decreased by an average of 50 million in recent days. Therefore, unless there are huge volume peaks that exceed the 23 September averages that drop the price below 40 cents, our upside perspective is still valid.

This is a bullish breakout due to price peaks at the end of September. The subsequent accumulation of narrow price ranges completes a bull flag with supports at 40 cents and bull / resistance primers at 55 cents. Unless otherwise, and as indicated above, every minimum around the 40 cents to 50 cents range is perfect for traders who want to add to their long runs. Depending on where you buy, the mounting stops should be 40 cents or 50 cents.

The fundamentals are strong, but even if the technical data appear shaky, the XRP / USD bulls are in charge. The loss of four percent on the last day means nothing, since prices fluctuate between the 4th and the 4th month. Even better sellers still have to exceed the support levels of 50 cents and 40 cents convincingly. As the XRP / USD is traded within a bullish uptrend model, we recommend buying on-site with stops at 45 cents. And like our previous XRP / USD business plan, the first target is 80 cents and then $ 1.

This is not an investment tip. Do your research.