In addition to the sharp rise in Bitcoin prices in recent days, the volume of the DeFi market has also risen. According to data from Defipulse.com, the tied capital in Ethereum for DeFi applications currently stands at $ 12.13 billion and is headed for a new all-time high. The graph below shows that, especially in recent days, new capital has flowed into the market. 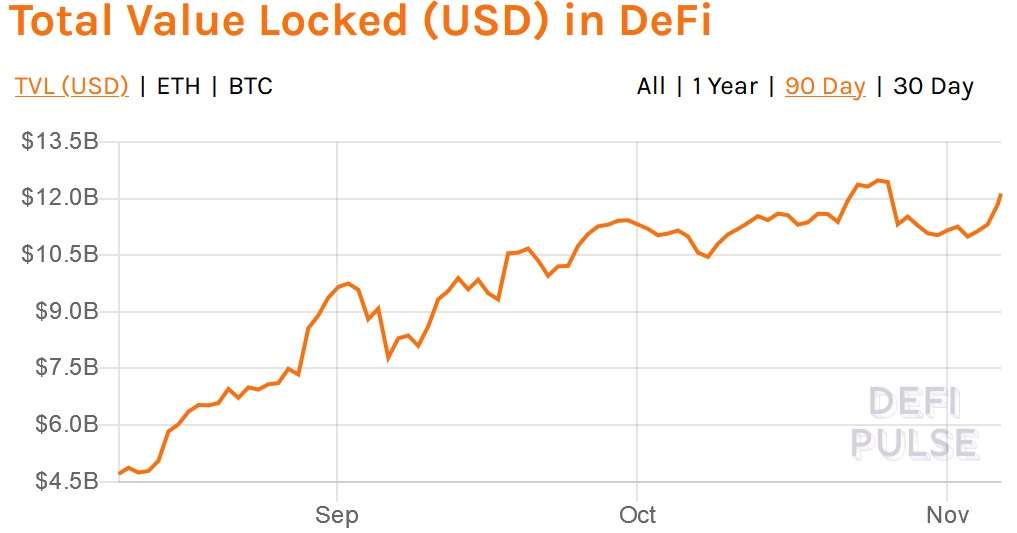 The trend of the DeFi market has not gone unnoticed by Wall Street firms. A careful analyst on Twitter took a closer look at the portfolio of a successful trading company.

According to Messari analyst Mason Nystrom, the Wall Street Jumping Trading giant, which employs a total of more than 700 people in New York, Chicago, London, Shanghai and Singapore, holds more than $ 75 million in various cryptocurrencies. The company has been active in the cryptocurrency market for several years. Nystrom says Jumping Trading owns COMP from Compound, KEEP from Keep Network, HXRO, Numeraire (NMR), Orchid Protocol (OXT), and MKR from MakerDAO. Most of the capital, 32 million dollars, was invested in Serum.

Jump Trading holds at least $ 75 million in cryptocurrencies and is the eighth largest COMP token holder behind a16z and Polychain. Jump bought 47K COMP in the last 7 days!

The further distribution of the capital to all 6 tokens is so far unknown. The COMP Governance Token increased by 100% in no time after the official launch. COMP’s goal is to lend and borrow with a relatively good return. The user receives interest for the loan of various cryptocurrencies. Interest rates are variable and depend on current market conditions.

The projects mentioned above have different goals, but all the tokens were able to make strong profits after launch. Analyst Qiao Wang States that Silicon Valley companies will increasingly enter the DeFi market in the coming months, which could dramatically increase market capitalization. He calls for caution, however, as venture capital can quickly create a bubble that could cost investors millions:

It seems Silicon Valley has finally discovered DeFi. Relative to cryptographic natives, they are typically lagging behind. They were late with BTC, ETH and this time DeFi. But if history is any indication, they will exalt it and create a huge bubble in the next few years.

In addition to the aforementioned DeFi tokens, Jump Trading is said to have a significant amount of money in Bitcoin, but the amount of capital invested is not known.

Meanwhile, the past few months have shown that more and more companies are investing in Bitcoin as a reserve currency. MicroStrategy recently bought more than 20,000 Bitcoins and only the price increase in recent months has allowed the company to surpass sales in recent years. Another notable advance in the adaptation was PayPal’s announcement to integrate Bitcoin, Ethereum and Co. into its digital wallet. Full rollout for all customers worldwide will be rolled out by Q1 2021.