US elections. Trump insisted on the fraud thesis. Three televisions stopped broadcasting because it was false – Observer 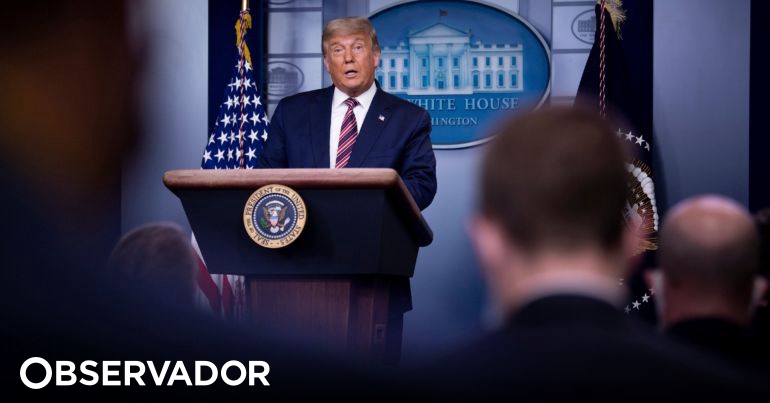 It was the first time Donald Trump had spoken – and not tweeted – to the nation from the communication he made in the early hours of Wednesday morning. But the speech had changed little or nothing: the president of the United States insisted he was re-elected, at least if “legal votes” were taken into account and the vote-counting system was sabotaged by the Democrats.

If we count the legal votes, I win easily. If we count the illegal votes, they can try to steal our elections. I’ve already decisively won some major states, including overwhelming victories in Florida, Iowa, Indiana, Ohio, for example, “said Donald Trump.

The problem is that there is no indication or evidence of fraud in the counting of votes: This is a narrative that the Republican has defended since the projections pointed to Joe Biden as the most likely winner of this election and which has motivated a series of trials to suspend the counting of votes or to complain about the alleged lack of observers Republicans at the counting tables.

These statements were enough for three North American open-channel televisions – ABC, CBS and MSNBC – have stopped broadcasting of Donald Trump’s press conference, a conference in which reporters had no right to ask questions.

On the first channel, the pivot fired: “We were listening to President Trump addressing the nation for the first time since the early hours of Wednesday. He was making several, frankly, false accusations, meaningless statements. And this is not me who am partial, they are facts ”.

The moment ABC, NBC and MSNBC interrupt the US President’s speech to warn he is lying ???????? pic.twitter.com/SY8fkfdMxm

At MSNBC, the break was as follows: “Well, here we are again in the unusual position of not only interrupting the President of the United States, but of correcting the President of the United States“The reporter began by saying:” There are no illegal votes known, there is no Trump victory known. “Ari Melber, a journalist specializing in law, confirmed that the president’s words” are false “.

But Donald Trump kept talking. Polls have now been launched stating this they were used to completely prevent Republican voters from voting. “There wasn’t a blue wave, as expected, but rather a red wave,” he said, speaking of “electoral interference” by the Democrats: “the Democrats would never have thought they could win this election.”

“On election night we were winning in North Carolina, with a lot of votes, and we’re still very far ahead, but not that far,” he points out. Trump has attributed this loss to postal votes, which he accuses of being biased. “They are finding mail-order votes. It is amazing how distorted these postal votes are“.

In Pennsylvania, the Republican says he has a 700,000 vote lead. Now there are 90,000 different and postal votes, which tend to Democrats, “keep coming, they are everywhere”, he criticizes. In Georgia, he says he got to win “for a long, long time”: “It was nearly 300,000 on election night.”

Our goal is to defend the integrity of the elections, we will not allow corruption to steal the election, he said. “They are trying to steal an election”, he continued: “The Democrats say they won the election. I wouldn’t believe it.”

“I think we will easily win the elections and I believe there will be many lawsuits because we cannot have stolen elections like these. I had said many times that postal voting would end in disaster. This is a large-scale fraud and it is increasing every day, “continues Trump.

We cannot let this happen, we cannot have the misfortune of this happening in our country. I hope it resolves quickly, but it should lead to legal proceedings. There was a lot of confusion and we cannot admit it in our country. This has to go to the highest court in the country, “he concluded.

On CNN, Donald Trump’s speech was never interrupted. But neither journalists nor commentators nor analysts spared criticism of the US president’s claims. The speech was “pathetic” and the moment “sad”, they concluded. “It looks like an obese turtle turned on its back, flapping its wings in the hot sun, realizing that its time is running out“Compared to Anderson Cooper.

“That’s the president of the United States. That’s the most powerful person in the world, and we see him as an obese turtle on his back, squirming in the hot sun, realizing his time is up.” pic.twitter.com/OW1bbFq6bK

Not even Rick Santorum, a former US Senator from Pennsylvania and the same political color as Donald Trump, agreed with the Republican’s words: “No Republican elected official will support these statements“He said, saying the US president’s accusations” are almost incendiary. “

Per Santorum, who became a presidential candidate, Trump’s position is “dangerous”.

I sat there listening to him talk about the grades being taken from him, then he started talking about Arizona and he said: ‘I win this if the votes count’. How can you tell in Arizona, but if you count the votes in Philadelphia you are already robbed? “She asked. “The reality is that in Pennsylvania, Democrats voted by mail and Republicans voted in person, but because he asked them to,” he explained.