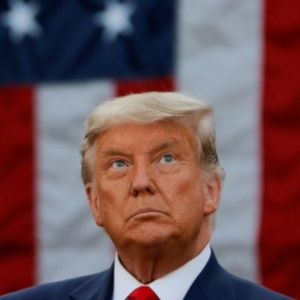 US President Donald Trump backtracked on Sunday after appearing to publicly acknowledge for the first time that his Democratic rival Joe Biden won the November 3 election, saying he conceded “nothing” among his false claims. . that the vote was rigged.

Trump appears at a rally by his supporters in Washington

“(Biden) won because the election was rigged,” tweeted Trump, who has overturned his claims on numerous occasions.

“(Biden) He won because the election was rigged. THERE WERE NO SUPERVISORS OR OBSERVATORS, “Trump wrote on his Twitter account, in a message accusing the Dominion company,” owned by the radical left “, of providing complicity with” misleading “vote-counting equipment. “false and dumb media”.

Minutes after the aforementioned tweet, Trump himself claimed that Biden only won in the eyes of the fake news media and that he has a long way to go.

Since Saturday, November 7, US media projections of the counting of votes have given Biden victory, but the current Republican president has claimed there was a fraud, for which he launched a legal battle to overturn the result.

Through legal tricks, Trump’s legal team has filed several appeals to delay results that do not favor him, but analysts indicate that this tactic is unlikely to be successful because the election and vote count did not present serious irregularities.

The president has not yet conceded victory to Biden, who added 306 Electoral College votes which determines the winner of the presidential election, according to Edison Research, far more than the 270 needed.

Trump posted a series of mixed posts on Twitter on Sunday.