Trump Appears at His Supporters’ Event in Washington | news 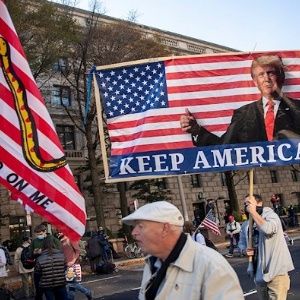 United States President Donald Trump appeared this Saturday by surprise in the “MAGA March (Make America Great Again) of the Million”, scheduled for Friday by supporters of the President of the United States, but has declined to comment on the results of the 2020 elections.

Participants responded with shouts of “USA, USA!” and many of them chased the presidential vehicle to try to be photographed. The presidential convoy passed in front of Freedom Plaza, where enthusiastic supporters shouted “Four more years!” National media reported.

On Friday, Trump expressed through his Twitter account that “it is comforting to see all the tremendous support there is, especially the demonstrations that are naturally emerging across the country, including a big Saturday in (Washington) DC. try come and say hello “.

Trump insisted he was able to reverse the election results after media projections gave his rival, Democrat Joe Biden, the winner, and warned, “Never bet against me.”

The president was confident he would win the 270 Electoral College delegates he would need to keep the US presidency, despite the fact that the country’s mainstream media gave Biden the winner.

Georgia began on Friday the manual recount of all votes cast in the November 3 elections, given the narrow margin of the first count between Trump and Biden, which has 14 thousand votes in its favor and which would be represented by 16 delegates from this state.

…. We can not waste time and we can only give to those states who will immediately use the vaccine. Hence the New York delay. Many lives to save, but we are ready when they are. Stop being political!


As for Michigan and Pennsylvania, where the media also gave the Democrat victory, Trump stressed that these are “big states” and stressed his strategy of protesting that observers of his campaign could not closely follow the check sometimes.

The Republican has not acknowledged his defeat against Biden and has been claiming for days that there was a fraud in the elections, without having provided any evidence.

Republicans along with Trump’s attorneys have filed several legal appeals to delay certified results in key states like Pennsylvania, where projections indicate the Democratic candidate won with a wide advantage.

Despite this uncertainty created by the Republican, who is calling for his re-election, the Democrat Biden is advancing in the formation of his cabinet and the first tasks of his next government.