The week has started with all the cryptocurrencies doing well in comparison to the previous week. This includes Tron, the tenth-largest cryptocurrency by market cap. The coin, which dethroned Monero [XMR], the most sought-after privacy coins, continued to advance in the market, both in terms of ranking and development.

The cryptocurrency which is aiming at surpassing Ethereum and Bitcoin, has crossed a new milestone. Tron has crossed the three million mark in terms of daily network transactions. The network had breached the two million mark just a few days ago, showing that it is on its path to a faster progress. 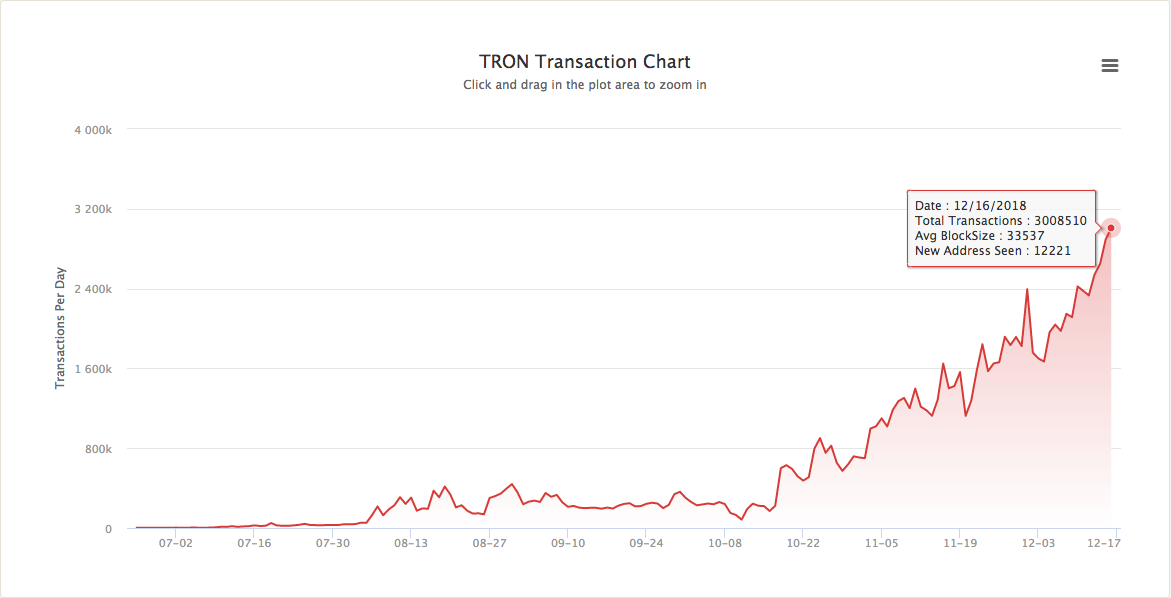 "Nice! It is a blockchain transaction. Real use case? It's a real transaction. Use: that's the case. Looking forward to see how Tron ecosystem evolves! #TRX "

The total transactions on the network have also been marked with a significant growth.

Justin Sun, the founder and CEO of the Tron Foundation, said:

Additionally, Justin Sun is also expecting a significant progress in the dApps built on Tron network. In the month of November 2018, the founder had stated that he was expecting 80+ more dApps on the network in December, claiming at 400% growth for the month.

On which, he said:

Moreover, the foundation has been relentlessly working towards making Tron a developer friendly ecosystem. Sun has submitted two proposals this month, one aiming at reducing the energy from 20 sun to 10 sun, and the second aim at increasing the energy limit.

Both the proposals were approved by the governance committee of the community. Along with this, the Foundation unveiled the Tron Arcade, a 100-million fund for gaming developers, for the next three years.