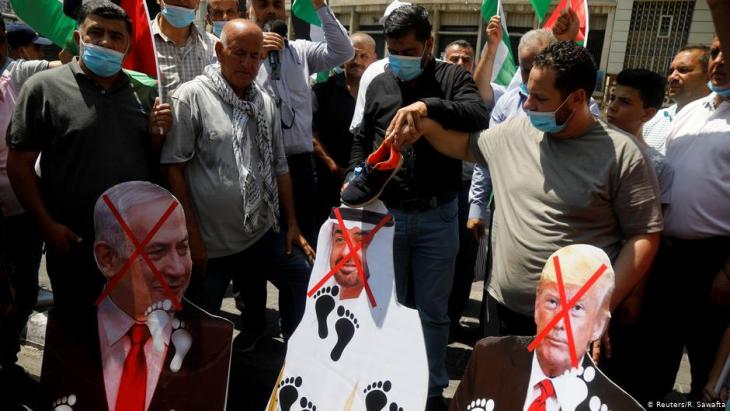 The image is taken from a protest against the Emirati move in the Palestinian city of Nablus. The UAE and Israel sign about three According to the president of the United States, a historic agreement in Washington aims to normalize relations between them, making Abu Dhabi the third Arab capital to follow this path since the constitution of the Jewish state, although their readings concern the Israeli plan to annex two different Palestinian lands.

In the eyes of the Emirates, Israel agreed to “stop the Israeli annexation of Palestinian lands” in exchange for this agreement. Abu Dhabi Crown Prince Sheikh Mohammed Zayed Al Nahyan tweeted: “In my phone call today with US President (Donald) Trump and Israeli Prime Minister (Benjamin) Netanyahu, it was decided to stop Israel’s annexation of the Palestinian territories. “

However, Netanyahu did not confirm this. He said annexing parts of the occupied West Bank “Postponed”, but Israel “has not abandoned it”, stressing that “I have brought peace and will achieve annexation”.

For his part, US Ambassador to Israel David Friedman said: “The various parties have chosen the wording carefully. + A temporary pause +, not completely ruling out the question.”

France welcomed the agreement. French Foreign Minister Jean-Yves Le Drian said that “the decision taken in this context by the Israeli authorities is a positive step that must be transformed into a definitive measure”.

Among the Gulf states, Bahrain expressed, in a statement, its “profound congratulations” to the United Arab Emirates for this “historic step” which “will help to strengthen stability and peace in the region”.

Egypt and Jordan are the only Arab countries that signed peace agreements with the Jewish state in 1979 and 1994.

Egyptian President Abdel Fattah El-Sisi said in a short tweet that he “appreciates” the agreement, saying it is a step “that will bring peace to the Middle East”.

Jordan has not welcomed the agreement and has not rejected it, considering that its future “will be linked to what Israel will do” to “achieve a just peace” “by ending the occupation”.

And Jordanian Foreign Minister Ayman Safadi said that “the decision to freeze the annexation of Palestinian lands, included in the agreement, must be followed by Israel by blocking all illegal measures that undermine the chances of peace”.

Myths of the “axis of resistance” in Iran, Lebanon, Yemen, Syria and Iraq

Will Jordan cancel the peace agreement with Israel if it annexes the West Bank?

After Turkey promised to “hold” the UAE accountable for Libya and Syria, Abu Dhabi calls on Ankara to abandon “colonial illusions”

Turkey vows to “hold the United Arab Emirates responsible” and accuses Abu Dhabi of “harmful acts in Libya and Syria and chaos in Yemen”.

The deal was announced by US President Donald Trump, who tweeted on Twitter: “It’s a huge step forward”, praising “a historic peace agreement between our two great friends.”

Later, Trump announced that the agreement to normalize relations between Israel and the UAE would be signed in the White House within about three weeks.

In a press conference, he praised the Crown Prince of Abu Dhabi, who described him as a “wonderful partner” who demonstrated his “vision and leadership skills”.

“I’m looking forward to hosting them in the White House soon, to officially sign the deal,” Trump told reporters. “We will probably do that in the next three weeks, I estimate,” he added.

Establishing diplomatic relations between Israel and US allies in the Middle East, including the wealthy Gulf states, is a primary goal of Trump’s regional strategy to contain Iran, a staunch enemy of Washington and the Jewish state.

Netanyahu saw it as a “historic day” for an agreement that represented a “new era” for the Arab world and Israel.

A joint US-Israel-Emirati statement described the agreement as a “historic diplomatic milestone” that “would strengthen peace in the Middle East region.”

He also considered it “a testament to the bold diplomacy and vision of the three leaders, and to the courage of the United Arab Emirates and Israel in charting a new path that opens the way to great potential in the region.”

This political announcement also marks a major achievement in Trump’s foreign policy, as the campaign for his re-election as president in November 2020 looks difficult.

In late January 2020, Trump announced a peace plan between Israel and the Palestinians that would allow Israel the ability to annex Israel to Jewish lands and settlements in the West Bank, which international law considers illegal.

For his part, the UAE Minister of Foreign Affairs, Anwar Gargash, said in a tweet on Twitter on Friday that “the positive reactions of the major capitals to the tripartite declaration are encouraging, especially since he has addressed the danger in evaluating these capitals. to annex the Palestinian territories to the possibilities of a two-state solution “.

He believed that the decision of the Crown Prince of Abu Dhabi, “the courageous expression of the realism we desperately need. Successful decision is a give and take and that is what has been achieved”.

Gargash did not specify in a press conference on Thursday the opening date of the exchange of the two embassies, adding that it would be “soon”.

United Nations Secretary-General António Guterres welcomed the agreement, expressing his hope that it will help reach a solution to the conflict between Israel and Palestinians based on the principle of a two-state solution.

US Secretary of State Mike Pompeo expressed his country’s hope that “this courageous step will be the first in a series to end 72 years of hostility in the region.”

For his part, the Republican candidate in the US elections, Joe Biden, welcomed the “historic” agreement.

In a statement on Friday, Iran condemned the normalization of relations between Israel and the UAE, describing it as “strategic madness”, stressing that the Palestinian people would not forgive Abu Dhabi. “History will show that this strategic mistake will lead to the strengthening of the axis of resistance in the region,” the statement said.

For its part, the Turkish Foreign Ministry said in a statement that “the UAE is trying to present this agreement as a kind of self-sacrifice for the good of Palestine at a time when it betrays the Palestinian cause to serve the his interests “. “The history and conscience of the peoples of the region will never forget this hypocritical behavior and will never forgive it,” he added.

In Ramallah, the Palestinian Authority led by Mahmoud Abbas called the agreement a “betrayal” and called for an emergency meeting of the Arab League.

Palestinian presidency spokesman Nabil Abu Rudeineh said in a statement read on state television that the agreement “undermined the Arab peace initiative” and constituted “a betrayal of Jerusalem and Al-Aqsa and the decisions of the Arab and Islamic summits and international legitimacy and aggression against the Palestinian people “.

Hamas also rejected the agreement. “It is condemned and does not serve the Palestinian cause, and is considered a continuation of the denial of the rights of the Palestinian people,” he said through his spokesman, Hazem Qassem.

Finally, the adviser and son-in-law of US President Jared Kushner said there is a “very high probability” that Israel and another Arab country will announce the normalization of relations between them during the next three months. AFP 08/14/2020