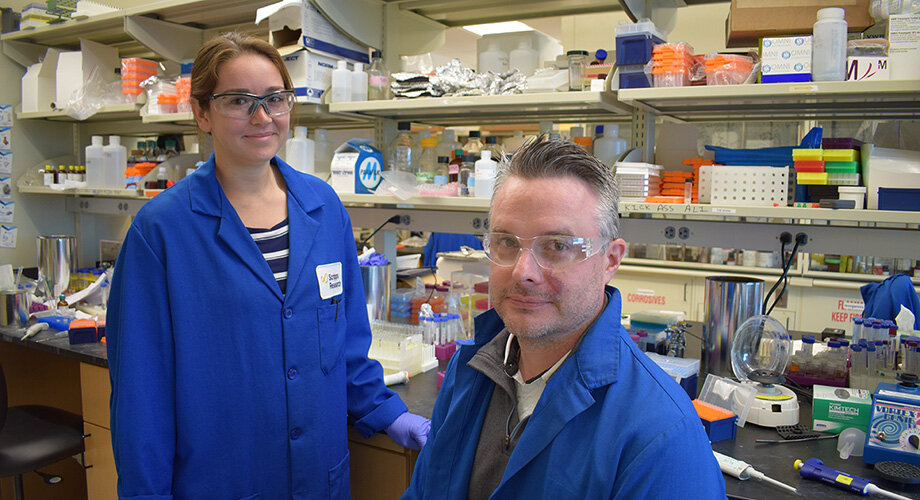 A new strategy for treating a variety of diseases known as RNA repeat expansion disorders, which affect millions of people, has shown promise in proof-of-principle tests conducted by scientists at Scripps Research.

The findings suggest that one day, a handful of well-targeted drugs may be able to treat the more than 40 human ailments, including Huntington’s disease and variants of amyotrophic lateral sclerosis (ALS), which result from repeated RNA expansions.

“This study lays the groundwork for the development of drugs that can address multiple repeatedly expanding diseases by targeting abnormal structures shared on their RNAs,” says study lead investigator Matthew Disney, Ph.D., professor of chemistry at Scripps. Research.

In repeatedly expanding RNA diseases, the mutant genes contain excess DNA in the form of dozens or even hundreds of short repeated strings of DNA “letters”. In cells where these mutant genes are active, that DNA is copied into RNA molecules to be translated into proteins. The resulting abnormal RNAs can cause problems in a number of ways, for example by folding into structures that are toxic to cells.

In the study, published in Cell chemical biology, scientists have shown that a potential drug molecule they developed can neutralize the toxic RNA that causes two distinct repeated expansion disorders, myotonic dystrophy 1 (DM1) and Fuchs corneal endothelial dystrophy (FECD). In the latter case, it can do so via an unexpected but powerful mechanism.

Genetic diseases that are in dire need of treatment

DM1 is estimated to affect approximately 140,000 people in the United States. It can occur anywhere from childhood to adulthood. And while it doesn’t always shorten lifespan, it often brings a debilitating array of symptoms including muscle weakness and pain, cataracts, and respiratory and gastrointestinal problems. The disorder is caused by a mutant copy of a gene called DMPK, whose RNAs contain dozens to hundreds of repetitions of the RNA letters “CUG”.

FECD, which causes progressive damage to the cornea of ​​the eye that often requires corneal transplantation, has a relatively high prevalence; studies suggest that it occurs in at least a different percentage of Caucasians over the age of 50. The disorder is caused by a mutant version of a gene called TCF4, whose RNAs also contain abnormally long CUG repeats.

These disorders arise from different mutant genes and consequently appear in different types of cells, but involve virtually the same toxic mechanism: in each case, the inclusion of an abnormally long sequence of CUG repeats causes the RNA copied from the gene to form. structures that are “sticky” to certain other proteins in the cell and effectively captures them, preventing them from doing their job in the cell. The depletion of one of these captured proteins, MBNL1, is a particularly important cause of cell damage and symptoms in DM1 and FECD.

For the new study, Disney and his team used advanced computational methods to design a small organic molecule that selectively binds to abnormal CUG expansion RNAs found in MD1 and FECD-affected cells, preventing these RNAs from capturing MBNL1.

To evaluate and improve the molecule, the team used a unique tool they had previously developed, Competitive Chem-CLIP, which allowed them to test their molecule’s ability to selectively recognize the toxic expansion structures of the CUG.

The team showed that in cultured cells derived from DM1 patients, as well as in an animal model of the disease, their improved designer molecule successfully reduced MBNL1 depletion and loss of its function.

In FECD cells, the drug molecule also worked to prevent signs of the disease, but this time with a different and potentially more powerful mechanism. In FECD cells, the gene mutation that causes the disease occurs in a non-coding part of the gene called the intron. Normally, introns, when copied into RNA, are cut out of RNA almost immediately and degraded by disposal systems in the cell. In FECD, the presence of CUG repeat expansion prevents excision of the affected intron. However, Disney and his team found that their molecule allows for excision, so that the abnormal element of RNA is not only blocked but destroyed.

Targeting toxic RNAs with small organic molecules that can be put into pill form has generally been very challenging, so far, Disney notes, but the finding in this study points to the promising possibility of using such molecules to more than just block bad RNAs. but to trigger their destruction.

“If a drug causes the destruction of a toxic RNA instead of just blocking it, the effect should last longer,” he says.

After running the proof of principle demonstration, he and his team, which includes a startup biotech company, Expansion Therapeutics, are continuing to develop the molecule tested in the study as a potential drug treatment for DM1 and FECD.

Disney notes that his group’s computational approach to drug discovery, as opposed to traditional methods that involve screening large sets, or libraries, of molecules gives them a major advantage: “Our ability to do computationally-assisted allows you to get the initial compounds quickly, and test them quickly, “says Disney.

Provided by The Scripps Research Institute