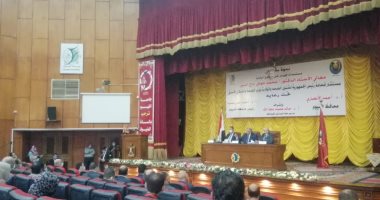 Dr Mohamed Awad Taj El-Din, Advisor to the President of the Republic for Health and Prevention Affairs, said that when the isolation hospitals in Zirwa were full, Corona spread and when cases increased and we had a problem in their issue, the Supreme Crisis Management Committee held a meeting and decided to open 320 hospitals in Egypt, which were opened and equipped at night to solve the overcrowding problem. In front of the chest and fever hospitals.

The president’s adviser pointed out that health care, when it was politically supported, achieved a lot and we had a lot of medical experience that was used during the crisis.

She pointed out that there is an increase in cases right now due to overcrowding, school buses, window closures and a severe lack of commitment to wearing masks.

This took place during the seminar held by the President’s Advisor at Fayoum University, in the presence of Dr. Ahmed Jaber Shedeed, President of the University, the college deans and a number of students.

The president’s advisor stressed that the greatest burden in dealing with the Coronavirus pandemic falls on medical personnel, many of whom have been infected and have died..

Dr Ahmed Jaber Shadid indicated that teaching hospitals at Fayoum University are seeing continued development, both in terms of new hospitals and departments and at the level of new colleges, to which Physiotherapy College has recently been added, which will enter service. over the next few years, explaining that the University Hospital’s isolation hospital can accommodate (120) A well-appointed bed.