The double play of Jihan Wu. From Bitcoin Evangelist to Dictator 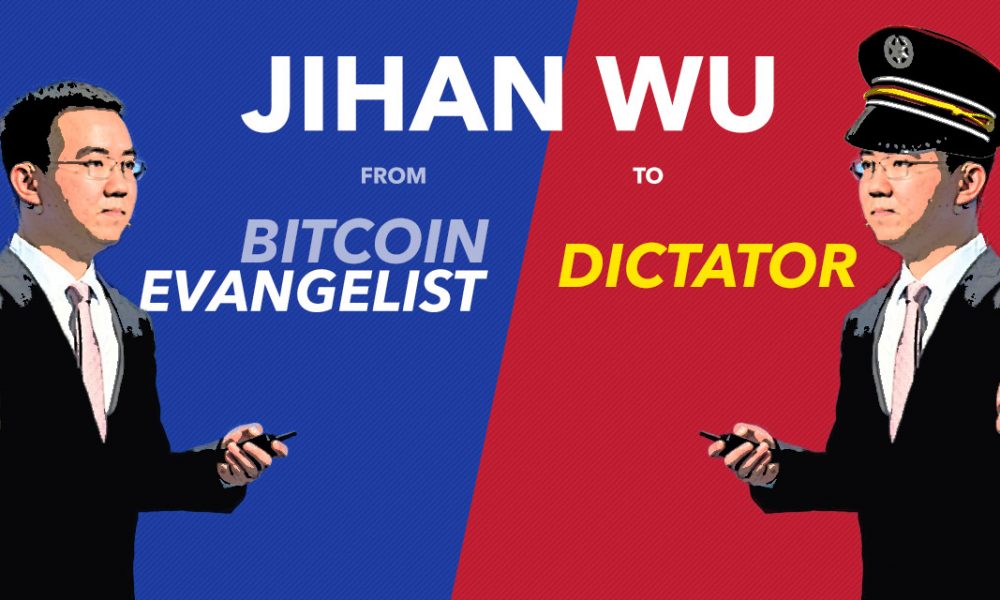 Jihan Wu, the co-founder of the world's largest mining machinery company, Bitmain, has seen great success mixed with fierce criticism throughout his career. Often seen as a controversial figure in a blockchain space. the 32 year old has sent the tongues wagging again with his shake from the head of the company he founded shortly before the new year.

"The winter is coming" – the warning to Wu

During the crisis of cryptocurrency in the market, nicknamed the cryptic "winter", Bitmain feels the cold. Shortly before the end of 2019, it seemed to worsen further as December 28, 2018, it was reported that Jihan Wu would leave the position of CEO in Bitmain.

Wu himself chose to remain silent on the matter.

In the last six months, Wu Jihan's remarks over it Twitter were mainly related to the Bitcoin Cash fork (BCH). During this period, he took the initiative and repeatedly requested the removal of Craig Steven Wright (CSW), the "False Nakamoto" from the BCH community. And every time he was splashed by the opponent, he would always react to clear himself.

Although his last post on Twitter (from the time he was canceled) on December 3, 2018, he showed a marked change in approach and sharply illustrated his feelings at the interior of the company. company: "The employees who had been cut by Bitmain were spoiled …"

An employee of Bitmain released the news of the dismissal. Bitmain had started using a tool called "Appia" among the employees. According to official sources, Appia is a public cloud SaaS service developed by Bitmain for AI security systems. But today it has turned into a computer monitoring tool for employees. Has this become a breaking point for Wu?

Wu, who viewed liberalism as a standard, had no idea that one day society would set up such a monitoring system. He has always been a soldier in the social network. "The warrior in the blockchain industry" – according to Li Xiaolai.

Perhaps a look at how it all started for this "warrior" blockchain could give a broader view of Wu's complex character.

Wu Jihan: from rags to riches

In 1986, Wu Jihan was born in Chongqing, the youngest city in China and a place with a huge inequality.

Growing up, his family was not rich. However, at least from high school, Wu Jihan was receiving excellent education. He studied at Chongqing Nankai Middle School, one of the best in the area, and later successfully applied to Beijing University.

While studying at the Beijing University School of Economics, he never hid his faith in the Austrian School of Thought. Firmly believing in a completely free market economy, and naturally opposing all forms of government intervention.

It was in 2011, Wu Jihan, while working as a bank investment manager, touched Bitcoin for the first time.

"Welcome to the Bitcoin network, here is the free financial port on the Internet, the tax-free shopping area and the anarchist paradise".

Wu proclaimed on Weibo in November 2012

At that time, he was undoubtedly a convinced liberal. He shouted on Weibo against Ripple, discussing the centralization of the currency. He openly refuted Apple, and supported the Google X project that "can really change the world".

He translated the Bitcoin white paper and co-founded 8btc.com (one of the largest Chinese online community forums). With the name "QQAgent", he became one of the best known Bitcoin evangelists on the Chinese Internet.

After 2012, a new round of bull market for Bitcoin had arrived. Mining has become an instrument for making wealth in the circle of cryptocurrency.

In the beginning of 2013, "Pumpkin Zhang" (南瓜 张) developed the world's first Bitcoin ASIC mining chip – Avalon. In the same year, Wu Jihan quit his job at a bank and became a full-time Bitcoin practitioner.

After obtaining an investment, Wu began to recruit, trying to develop a mining machine based on the Avalon chip. But an accident led him to encounter an unprecedented crisis. Wu Jihan ordered a batch of Avalon tokens. Unexpectedly, the chip shipment has been postponed. Old customers and investors came to the door and Wu Jihan was helpless.

Despite the initial stoppage, Jihan together with a technical partner Micree Zhan founded Bitmain and, by the end of 2013, Bitmain launched the first BM1380 mining chip.

In a few years, with mines and mineral pools, Bitmain had established a monopoly in the mining area. In the blockchain world where hash power is everything, it has become an enemy in the eyes of many blockchain believers, but why?

On 1 August 2017, Bitcoin was bifurcated hard, and Bitcoin Cash (BCH) was born on the big block program. The Bitcoin community has experienced turbulence.

At the beginning of Bitcoin's expansion, Wu Jihan was not a staunch supporter of hard forks. But in the end, he became the one who pressed the nuclear "fork" button. Wu knew that the hash power he held in his hands was the best weapon to launch the fork.

This should not be due to Wu and is the predominant reason for many to regard it as hypocritical as it seemed to have monopolized power.

Jihan did not seem to deny it: "In China, open source culture is not popular, I can not figure it out on my own."

Being Wu "Unable to understand open source culture" He seems incredulous. A few years ago, he was still criticizing Ripple's currency, which was not open source, and considered Bitcoin's free and open source an advantage. What caused this sudden change of opinion? Perhaps, as they say: power corrupts.

In late 2017, Wu Jihan was selected as one of the top ten figures in the US media blockchain Coindesk.

In the comics designed by Coindesk, he stopped in front of a row of mining machines, wearing a Flocky gown of Marvel comics, holding a horned helmet and revealing a strange smile.

His eyes burst into the same green color as the lights of the mining machine behind him.

Just in 2017, Wu Jihan launched a fork on Bitcoin and, therefore, Coindesk called him the "bad guy".

Despite his obvious negative image, Coindesk stressed that there are still people who consider Wu Jihan a "heroic" and a "bitcoin-rich enthusiast".

"But for all the innovations without permission on which the bitcoin was built, the space has become more black or white, more just or wrong than many might have predicted, and if you're a hero or a villain it depends on which side of the people he judges you »

Wu will certainly be a central figure in the blockchain history books, which will be written on him remains to be seen.

Whatever your opinions on man are, what is undeniable is its enigmatic nature and its safety. The creation of Bitmain, the self-developed chips, the Bitcoin fork and the BCH support are the games of Wu Jihan's life. Bitmain did it very high, but the gallows lowered it.

Wu Jihan may still want to fight until the end, but there simply are not enough funds to support the fights. As a person with a deep understanding of the blockchain he will never forget that one of the greatest advantages of the decentralized structure lies in security.

Maybe Wu will play on the safe side or try again. 2019 can give us all the answers.