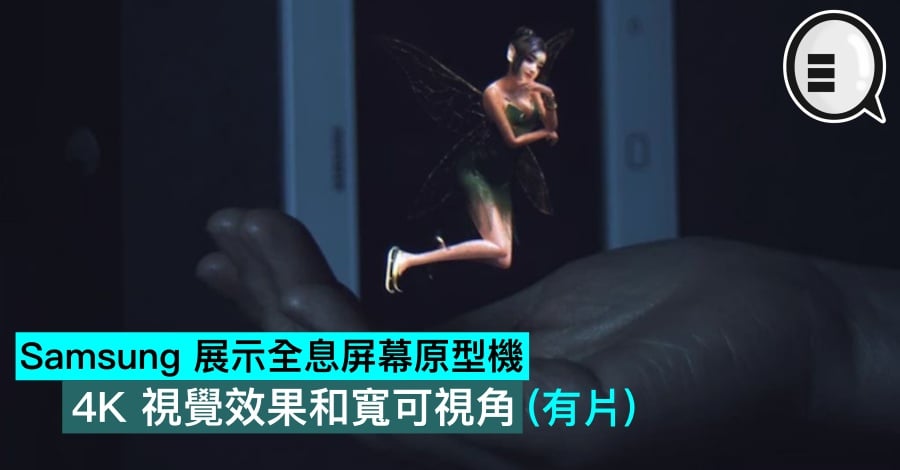 In the past few years, in terms of screen display technology, Samsung has relied on cutting-edge technology to produce many amazing displays. However, the technology of the past relies only on the 2D flat display. From Samsung’s point of view, the future belongs to 3D, and now Samsung has taken a solid step towards holograms: its prototype thin-plate device can display 3D images in 4K resolution and has a wide viewing angle, full of science fiction colors.

At present, holographic technology can be used to make a 3D image appear on a 2D screen. This effect is usually produced by a laser. The laser light is modulated correctly, so that different parts of the image look at different distances, creating the illusion of depth, just like It is the same as in the Hatsune Miku concert. But the current problem is that most of them are very small, usually made from smoke and mirrors, so the resolution is also quite low, so they can only be viewed from a certain angle.

In response to these shortcomings, Samsung’s prototype tried to solve all these problems. This screen prototype is the size of a smartphone and has 4K resolution that can be viewed from a wider angle, while also enlarging the viewing angle by around 30 times. Even better, it uses a less cluttered optical system and only one processor can run holographic footage in real time. The key to the device is a new optical element called the steering backlight unit (S-BLUE). This element uses a beam deflector to redirect the backlight in a given direction, which substantially widens the viewing angle by about 30 times. To calculate the numbers needed to run a holographic video, the team used a semiconductor called a Field Programmable Gate Array (FPGA), which can calculate the image layer by layer, rather than as a mass of dots.

The final effect of the display is also quite shocking: only a 10.1-inch flat-panel display less than 10cm thick can project a 4K resolution hologram at 30 frames per second. The engineering machine has such powerful performance. It’s not impossible for later models to achieve 4K 60 frames or even 8K.

To show the visualization effect, the team used a 3D video of a turtle swimming around the coral to show it. The user can use the keyboard to guide it, and the turtle’s position can be updated in real time, which shows that the FPGA can do real-time processing well. .

It seems that the holographic projection phone that was around before is no longer a dream, it is very exciting to think that things in the film can be viewed in three dimensions.