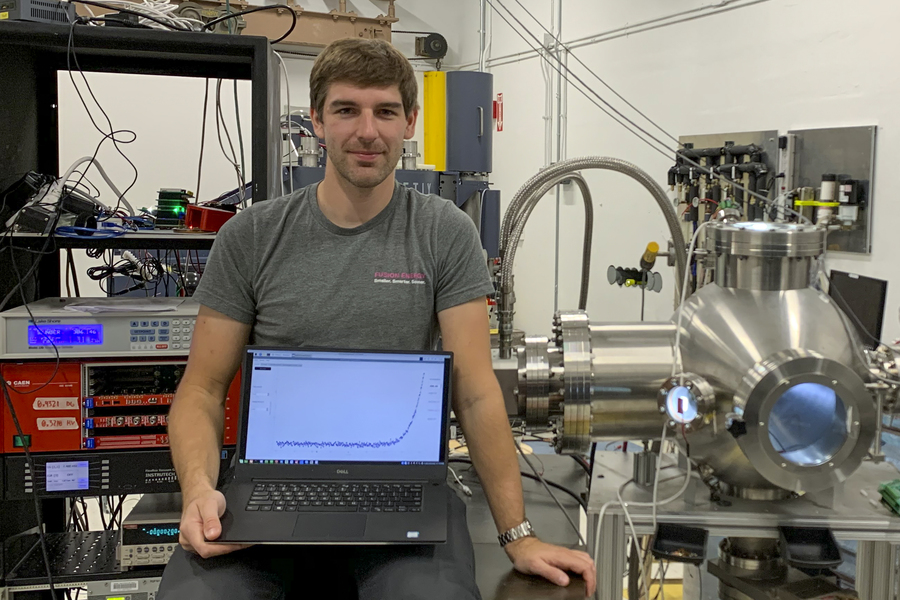 David Fischer recalls growing up in Vienna, Austria imagining the best way to cool the furnace used to hold the hot ion soup known as plasma in a melting device called a tokamak. With the plasma hotter than the sun’s core generated in a donut-shaped vacuum chamber just a meter away from these magnets, what temperature ranges might be possible with different refrigerants, he wondered.

“I was drawing these plans and showing them to my dad,” he recalls. “Then somehow I forgot about this fusion idea.”

Now starting his second year at the MIT Plasma Science and Fusion Center (PSFC) as a postdoc and new Eni-sponsored MIT Energy Fellow, Fischer has clearly reconnected with the “fusion idea”. And his research revolves around the concepts that so involved him as a young man.

Fischer’s early projects explored a popular approach to sustainable, carbon-free fusion power generation known as “magnetic confinement.” Since the plasma responds to magnetic fields, the tokamak is designed with magnets to keep the atoms from melting inside the vessel and away from the metal walls, where they could cause damage. The more effective the magnetic confinement, the more stable the plasma can become and the longer it can be held within the device.

Fischer is particularly interested in how to prevent HTS tapes from degrading. Fusion reactions create neutrons, which can damage many parts of a fusion device, with the strongest effect on components closest to the plasma. Although the superconducting tapes can be up to one meter away from the first wall of the tokamak, neutrons can still reach them. Even in small numbers and having lost most of their energy, neutrons damage the microstructure of the HTS tape and over time change the properties of superconducting magnets.

Much of Fischer’s attention is devoted to the effect of radiation damage on critical currents, the maximum electrical current that can pass through a superconductor without dissipating energy. If irradiation causes excessive degradation of critical currents, the fusion magnets can no longer produce the high magnetic fields needed to confine and compress the plasma.

Fischer notes that damage to the magnets can be reduced almost completely by adding more shielding between the magnets and the fusion plasma. However, this would require more space, which is an advantage in a compact fusion power plant.

“You can’t just put infinite shielding in the middle. You must first learn how much damage this superconductor can tolerate, then determine how long you want the fusion magnets to last. And then he designs around these parameters. “

Fischer’s experience with HTS tapes comes from his studies at the Technische Universität Wien (Vienna University of Technology), Austria. While working on his master’s in low temperature physics group, he was told that a PhD post was available for research into radiation damage on coated conductors, materials that could be used for fusion magnets.

Recalling the drawings he shared with his father, he thought, “Oh, that’s interesting. I was drawn to the merger over 10 years ago. Yes, let’s do it. “

The resulting research on the effects of neutron irradiation on high-temperature superconductors for fusion magnets, presented at a workshop in Japan, attracted the attention of PSFC Professor Zach Hartwig of nuclear science and engineering and Brandon Sorbom, Chief Science Officer of Commonwealth Fusion Systems.

“They attracted me,” he laughs.

Like Fischer, Sorbom had explored in his dissertation the effect of radiation damage on the critical current of HTS tapes. What neither investigator had the opportunity to examine was the behavior of the tapes when irradiated at 20 kelvins, the temperature at which HTS fusion magnets operate.

Fischer is now overseeing a proton irradiation lab for PSFC director Dennis Whyte. He is building a device that will not only allow him to irradiate superconductors at 20 K, but also immediately measure changes in critical currents.

He is delighted to be back in the NW13 lab, affectionately known as “The Vault,” to work safely with graduate student assistants and undergraduate research opportunities program. During his Covid-19 lockdown, he was able to work from home programming measurement software, but lost his daily connection with his colleagues.

“The atmosphere is very inspiring,” he says, pointing out some of the questions his work has recently raised. “What is the effect of the irradiation temperature? What are the mechanisms for the degradation of critical currents? Could we design more radiation resistant HTS tapes? Is there a way to cure radiation damage? “

Fischer may have a chance to explore some of his questions as he prepares to coordinate the planning and design of a new neutron irradiation facility at MIT.

“This is a great opportunity for me,” he says. “It’s great to be in charge of a project now and to see people believe you can make it work.”