Portrait of the first lady. Jill, the good fairy in Joe Biden’s life 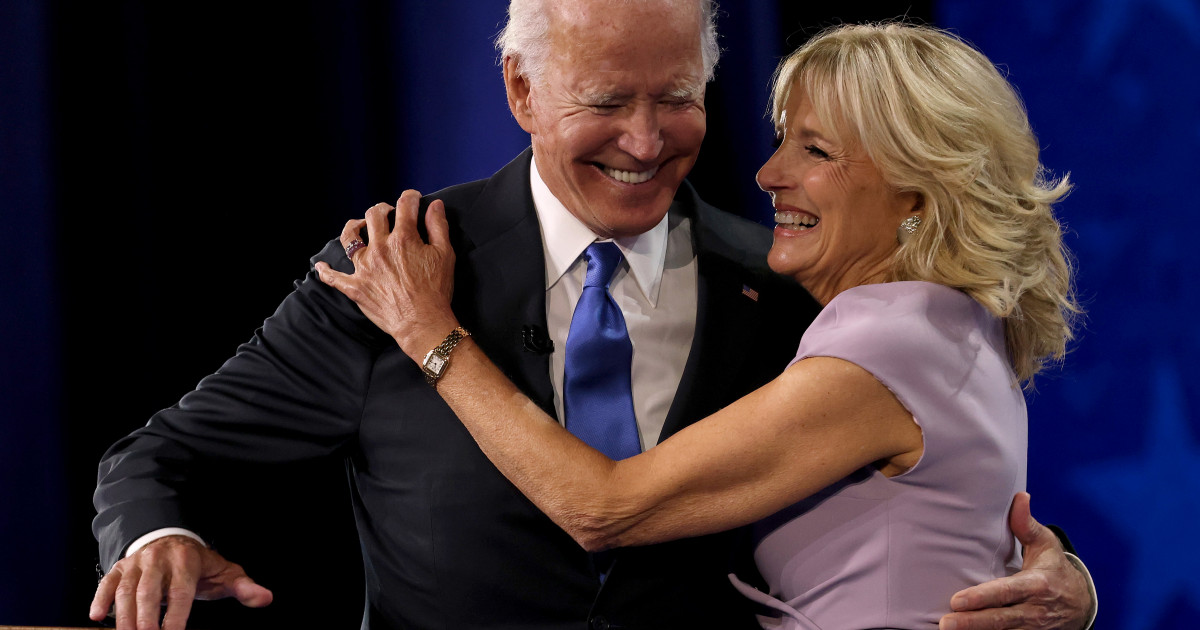 Hi, I’m Jill Biden’s husband. With these words Joe Biden, the future president of the USA, has presented himself at the electoral rallies in recent months. Joe first met Jill through a “blind date” arranged by his brother. He was a senator and he was nine years her senior. “Where do you get my number from?” That was the first sentence Jill said to Joe Biden when he called her for the first time.

Joe Biden’s wife and daughter died in a terrible accident in 1972. He had two other boys whom he commuted by train every day for years from Washington to Wilmington, Delaware, only to be home with them at night. When he asked her to be his wife, Joe warned Jill that he must be aware that he loved his first wife enormously. “Whoever can love so deeply once can do it a second time”, he would have replied. “It was then that I realized exactly what Jill’s love was for me: it allowed me to be myself again,” confessed Joe Biden in his 2007 memoir Promises to Keep. A daughter was born and Jill has been with her all her life.

But Jill turned down Joe’s marriage proposal five times before accepting. They married in 1977, five years after the tragedy that marked the new senator. “There was no question there was no love in between. But I got along so well with the guys, I wanted to be sure it would be forever,” Jill said in one of the campaign videos. Beau and Hunter, Joe’s two boys who survived the accident, became so fond of her that they asked their father to marry Jill alone, Joe Biden said in his memoirs.

Jill Tracy Biden (Jacobs girl) was born on June 3, 1951 in Hammonton, New Jersey, but grew up in Willow Grove, Pennsylvania (the state that won her husband’s election victory). She was the eldest of five sisters.

His father worked in a bank and his mother was a housewife. Her father had Sicilian roots, his surname was Giacoppo, but Jill’s grandfather changed it to Jacobs. My mother was of English and Scottish descent. Her parents didn’t go to church, but Jill often went to Presbyterian church with her grandmother.

Jill has always dreamed of a career of her own. “I think it’s important for every woman to have her money and be independent,” Jill Biden explained in an interview.

She started working at the age of 15, also as a waitress. In high school she was somewhat of a rebel, enjoyed social life and joked, but her colleagues say she was a good student and always loved English lessons.

Initially, she went to college to study fashion, but after a semester she was disappointed. She married Bill Stevenson in February 1970. He was a former college classmate and played soccer. Two years later, Stevenson opened a bar, Stone Balloon, in Newark, Delaware, near the University of Delaware. It has become one of America’s most popular student bars. There was one song, among others, and what would become the famous Bruce Springsteen.

Jill enrolled at the University of Delaware, College of Arts and Sciences, majoring in English. She dropped out of school for a year and worked as a model for a local agency in Wilmington. Her relationship with Bill Stevenson cooled and the couple separated in 1974.

She met Senator Joe Biden in March 1975. Joe’s brother Frank, whom Jill had met in college, put them in touch. Although he was nine years her senior, Jill was struck by Joe’s more formal looks and manner, which were not comparable to those of the boys she met in college. After the first meeting, he said to his mother: “Mom, I have finally met a gentleman.”

But the first impression was completely different: “I had met guys in jeans, clogs and a T-shirt, he came to the door, he had a coat and sneakers and I thought: God, this will never work, not even in a million years. He was nine years older than me. But we went out to see A man and a woman in a movie theater in Philadelphia and connected, “Jill Biden told Vogue.

Meanwhile, she went through a turbulent divorce with Stevenson and the court rejected her share in the Stone Balloon bar case, as she wanted. The divorce was pronounced in May 1975. It was also the year he graduated.

From substitute professor to doctorate in pedagogy

He began his career as a substitute teacher at Wilmington Public School, then taught English for a year at a Wilmington High School. For five months she worked in Joe Biden’s senatorial office and accompanied him on a trip.

They got married in New York in the United Nations Chapel. The ceremony was Catholic. It happened four and a half years after Joe lost his wife and daughter in a car accident. They spent their honeymoon at Lake Balaton, then in socialist Hungary, behind the Iron Curtain. They chose their destination on the recommendation of Tom Lantos, who was born in Hungary and then worked in Senator Biden’s office. Tom Lantos later became a congressman himself.

Jill Biden went on to teach and enrolled in a master’s degree at West Chester State College. By the time she received her master’s in education, she was already pregnant. The Biden couple’s daughter, Ashley, was born in June 1981.

For two years, Jill stayed home and raised the family’s three children. He then returned to work, teaching English and history in a psychiatric hospital program for students with emotional disabilities.

In 1987 he obtained a second master’s degree from the University of Villanova. She was a high school teacher for 13 years, then she went to college.

She went back to studying herself to earn her doctorate. She enrolled in her doctorate with her maiden name, Jill Jacobs. In 2007, at the age of 55, he earned his PhD in education from the University of Delaware.

Don’t give up on your career

In 1988, when her husband first ran for president, she has since said that she would continue to teach children with emotional problems, even if she became first lady. This promise, to continue teaching, he made – and kept it – even when he came to the White House as the vice president’s wife. To reiterate this even now, when she will be first lady, that it will be a first: she will continue to teach at a university in North Virginia, near Washington.

Indeed, this quality of his educator was also mentioned by Joe Biden in his first speech as president-elect, when he paid tribute to his wife, noting that he dedicated his life to education. “For American educators, this is a great day: you will have one of you right in the White House,” said Joe Biden.

“Teachers are not what I do. This is who they are,” Jill Biden said ahead of the Aug. 18 Democratic Convention, announcing she would be giving a speech in a high school classroom.

Jill Biden is also involved in the work of several non-profit organizations. Since 1993 he has been the president of an NGO, the Biden Breast Health Initiative, which aims to talk to high school girls about breast health. In 2007, Jill Buiden founded Book Buddies, an organization that provides books to poor children, and has also been very active in an organization that supports military families, Delaware Boots on the Ground.

Jill Biden runs 8 miles five times a day and has competed in the Philadelphia marine marathon and half marathon.

Indeed, her energy, character and optimism helped Joe Biden in the run-up to the elections, in which she was involved and has always been by his side in demonstrations and television programs. The moment it went viral on the Internet when, at a rally, she personally pushed a protester who had taken the stage and approached her husband. It happened in March in Los Angeles.

With a strength that sometimes surpassed that of her husband, Jill tirelessly conveyed the same message: only Joe Biden will be able to bring such a divided country together. It is a time when Americans must unite to overcome the pandemic and the economic crisis. And while Joe Biden has limited his campaign travels, the 69-year-old teacher has increased his visits to key states, which are essential to the Democrats’ victory. Like her husband, Jill Biden calls for tolerance and respect: we don’t agree in all respects, nor is it necessary, but we can respect and respect each other.

It is therefore expected that the first lady of the United States in 2021 will have a completely different style than Melania Trump, who preferred to stay retired. Jill Biden will leave her mark on her status as the president’s wife. She also knows the White House very well, where she was the vice president’s wife for eight years. No doubt she will want to be an example for all women of the 21st century, who have to combine family life with career.

Jill was with the future president in another tragedy she went through in 2015: the loss of her eldest son, Beau, who died at the age of 48 from brain cancer. He was considered his father’s political heir. Jill Biden said Joe, Barack Obama’s then vice president, found the strength to resume his White House activities just days after his son died. She learned to heal a family, just like she can heal a country: with love, compassion, little gestures of kindness, courage and hope, Jill said. His remarks echoed in Joe Biden’s first speech as president-elect: Time to heal America! proclaimed the future president.

Jill Biden visited Romania in 2014 when she accompanied Vice President Joe Biden. She said she was excited and promised to come back.

Jill Biden stands for strength, optimism and fidelity. In a rare moment of reconciliation in an abrasive election campaign, Republican Senator Lindsey Graham, an ally of Donald Trump, greeted the English teacher’s speech at the Democratic convention that validated her husband’s candidacy: “Republicans say so too. …