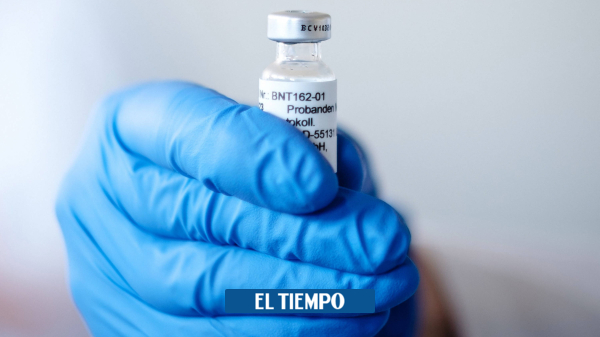 And one day, less than a year after China reported the first cases, the first coronavirus vaccine was approved in the West. The British government announced Wednesday has authorized the Pfizer / BioNTech covid-19 vaccine, which will be available “next week”.

In clinical trials, reported in recent weeks, this vaccine has been shown to be 95% effective and with good results for everyone, young and old.

“The government today accepted the recommendation of the Independent Agency for the Regulation of Medicines and Health Products (MHRA) to approve the use of the Pfizer / BioNTech covid-19 vaccine, “a ministry spokesperson said.

With this news, the UK becomes the first country in the West to authorize drug treatment to prevent covid-19. The British government has in fact revealed the purchase of a total of 40 million doses with which it will be able to vaccinate about 20 million people who will be given priority in the coming days.

(Also: Guilds are calling for COVID-19 vaccine decisions to be made together.)

“The approval follows months of rigorous clinical trials and extensive data analysis by MHRA experts.”This was stated in a statement released by the Ministry of Health.

Experts from the regulatory agency “concluded that the vaccine meets rigorous levels of safety, quality and efficacy,” the statement added.

The so-called Joint Vaccination and Immunization Committee (JCVI) is now expected to publish its recommendation on which groups will be the first to receive the vaccine, but it should be the elderly and healthcare workers.
With nearly 59,000 confirmed deaths from covid-19, the UK is the country most affected by the pandemic in Europe, which this year will cause the biggest setback in its economy in 300 years: -11.3%.

(You may also read: What Do Early Results of the HIV Prevalence Study Leave?).

The 56 million Brits have come out of a second four-week blockade, but only to find themselves under local restrictions that will prevent them from seeing family and friends at home and keep bars, restaurants, cinemas and theaters closed in half the country.

In this sense, The UK predicted the start of a gradual return to normal on Wednesday by becoming the first Western country to approve a coronavirus vaccine.

(You may be interested: Thanks to technology, ICU patients in Guainía have overcome COVID).

“It is vaccine protection that will ultimately allow us to get our lives back and restart the economy,” British Prime Minister Boris Johnson said, calling the approval for his use of the vaccine “fantastic”. covid-19 from Pfizer and BioNTech.

June Raine, executive director of the MHRA, said at a press conference that there was no rush in her recommendation to approve the use of this vaccine. To gain time, the agency used overlapping evidence and “continuous reviews” in its decision making. but all security protocols were respected, he assured.

In time with this historic announcement, the UK announced that it already has 50 hospitals ready to start vaccinating next week. Health Minister Matt Hancock said in statements to the SkyNews chain that, in addition to hospitals, Special vaccination centers, medical centers and neighborhood pharmacies are established.

Even so, the minister warned of the difficult conditions for maintaining the doses, 70 degrees below zero. “This is a challenging process and the NHS (public health) across the UK is ready … they are used to dealing with vaccines and drugs like this, with these kinds of conditions,” he added.

“It’s not easy but we have plans, so this morning I’m talking to my colleagues from the other regions (Scotland, Wales and Northern Ireland) to make sure we are all ready to vaccinate starting early next week “, has indicated.

The centers will also be prepared to vaccinate with the dose developed by the University of Oxford and the British pharmaceutical company AstraZeneca, which is evaluated by the regulatory body, the Medical and Health Products Regulatory Agency (MHRA).

The North American pharmaceutical company and its German ally Biontech, gave a historic coup on November 9, announcing, based on preliminary data, that the effectiveness of their vaccine was 92% and 10 days later, with other results. final, they announced that efficacy reached 95 percent, even in older people, as well as not triggering serious side effects.

But For the vaccine to reach people, Pfizer and its partner must overcome a series of challenges which, according to their announcements, they start by preventing it from falling apart along the way.

Because this vaccine is based on a synthetic piece of virus genetic material (mRNA) that causes defense reactions in the human body, it decomposes unless it is kept refrigerated at temperatures below minus 70 degrees Celsius, which, in words by healthcare worker Elizabeth Beltrán, requires enormous logistics never used before for transportation and storage.

Also, since there are two doses, Make sure people complete the pattern within 3 weeks, which can be complex. However, a few months ago, agreements were signed to reserve large quantities of the vaccine.

(We recommend: Europe decides on the first covid-19 vaccine before 29 December).

For this purpose, Pfizer and BioNtech plan to have 1,300 million doses ready by the end of 2021 and to this end, in parallel with the development of the project, they have already started mass production. at the plants of Andover (Massachusetts), Kalamazoo (Michigan) in the United States and Puurs (Belgium), with the support of BioNtech in Germany, which will become part of the commercial supply network.