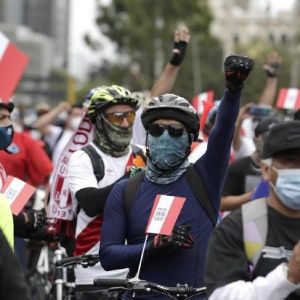 Thousands of people in Peru celebrate the resignation of Manuel Merino de Lama in the streets, removed from the resistance of popular mobilizations. Citizens celebrate what they consider a victory to the rhythm of pans and applause.

The president of Peru, Manuel Merino, announces his resignation from office

From the front of the Congress of the Republic, speeches are heard shouted by concentrated young people. “Viva el Perú”, “Vamos Perú” and “Sí se …” are the slogans that guide their march through neighborhoods and avenues.

Through a message to the nation from the Government Palace, Manuel Merino stepped down from his position as interim president and indicated that the legislative branch will have to decide what would happen. He also indicated that his ministers will continue in their positions so as not to leave power gaps.

Outside Plaza Bolívar there are two funerals in honor of the young people killed by police repression while protesting. Inti Sotelo Camargo, 24, and Jack Pintado Sánchez, 22, lost their lives in the demonstrations that took place earlier this Saturday in Lima.

The people who met in front of the Congress of the Republic were waiting for the message from Merino de Lama alive and direct. Hearing his resignation, the crowd exploded with excitement after speculating about his triumph as citizens.

The Peruvians celebrate the resignation of Manuel Merino de Lama as president in Plaza San Martín, while, from their homes, other citizens make cacerolazos and applaud the decision.


However, some voices are raised warning that people’s demands have not been resolved. According to users of social networks, they will be watching who will occupy the presidency. Likewise, they claim that the Legislature continues to be made up of what they call “corrupt” and “thieves” who seek to “perpetuate themselves in power”.

Meanwhile, the Congress of the Republic has been convened in plenary session for an emergency meeting. The current power vacuum is expected to be resolved at this meeting, set for 4pm local time this Sunday.