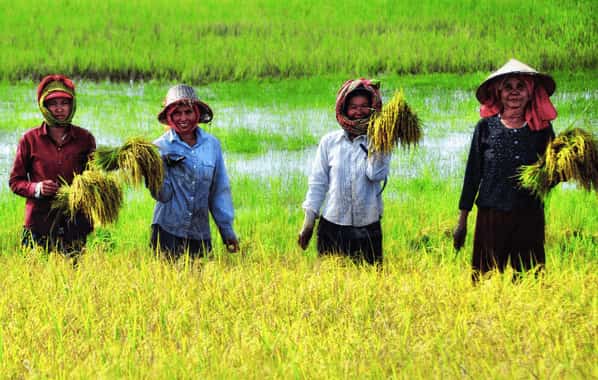 According to the official announcement, Oxfam, a global charity, has successfully launched a blockchain project to enhance the rice supply chain. The new blockchain program is called BlocRice that connects buyers and suppliers on an open network. The app aims to help farmers achieve greater negotiating power to improve supply chain efficiency. Before the previous launch, the project underwent successful trials in Cambodia.

In a statement, Oxfam reads it;

"The project aims to test blockchain technology and its smart contracts, a three-way digital farming agreement between the Cambodian rice primary producer and exporter and retailer in Europe, to improve farmers' livelihood and their supply conditions"

An app based on the built-in blockchain focuses on the traceability and transparency that keeps agricultural players in line. According to the report, the project will work with 50 rice farmers in the province of Preah Vihear in Cambodia. With this, the project encourages cashless payment. The pilot phase of the project will initially be presented to farmers. In order to successfully complete the proposed plans for farmers, the largest local commercial bank, Acleda Bank supports the move. As a result, more followers have already opened their accounts with FinTech.

Today, 50 farmers, in the province of Preah Vihear, are opening portfolio accounts with the ACLEDA bank for the cashless payment of their organic rice sold in the coming days of collection. This will help reduce travel time and paperwork transactions and minimize security risk. #BlocRice pic.twitter.com/AW04HtxWpA

Currently, the pilot project is limited to organic growth and is expected to expand other agricultural products in the future. Cashe nuts, cassava, pepper are some of the products that the project could take into consideration. Furthermore, Oxfam expects that the number of farmers participating in BlocRice will increase from 1000 to 2020 by 2022.

Information shared through a blockchain-based system will ensure a transparent and reliable relationship between the parties, including farmers, Cambodian rice exporters and Dutch importers.

However, it also encourages economic empowerment. The official notes follow as;

"BlocRice promotes the use of such digital contracts as tools for social and economic empowerment It is expected that the application of blockchain technology increases the bargaining power of small farmers in their value chains rice, which are usually poor primary producers ".

According to the official announcement, Oxfam, a global charity, has successfully launched a blockchain project to enhance the rice supply chain. The new blockchain program is called BlocRice that connects buyers and suppliers on an open network.