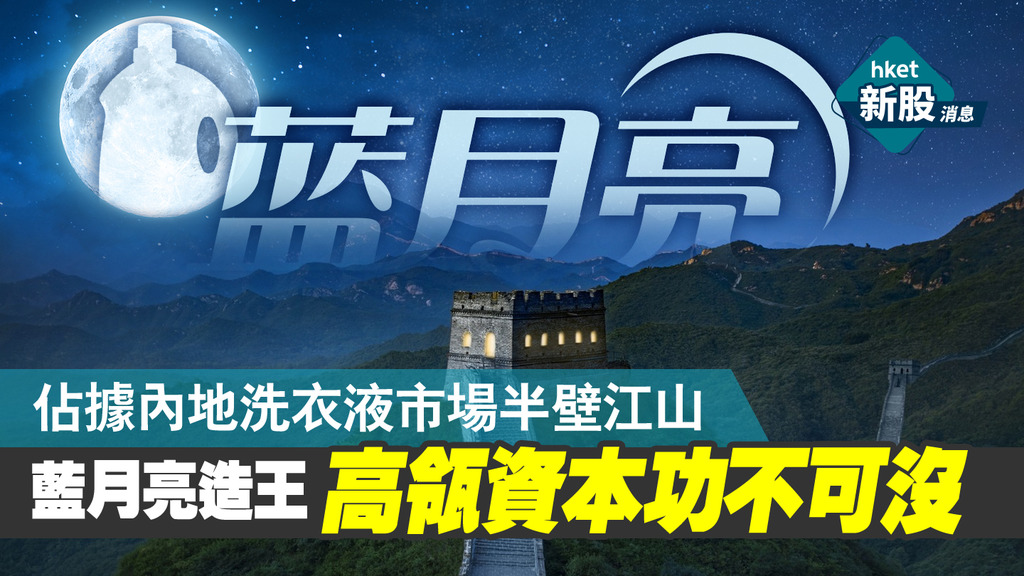 Blue Moon, who firmly holds the position as the first sibling of laundry detergent in the mainland, has managed to break through the barrier. The roadshow will begin next week. The initial plan is to raise 7.8 billion yuan. On the eve of its listing, Blue Moon announced a conditional special interim dividend of 2.3 billion yuan to Hillhouse Capital on its retained earnings at the end of June. The listing of Blue Moon gradually brought out the relationship between Blue Moon and Hillhouse Capital, the main promoter, and they have been together for ten years. Hillhouse Capital founder Zhang Lei once said, “I’ve been optimistic about Blue Moon for 10 years!” What’s unique about Blue Moon?

On the daily necessities shelves of Chinese supermarkets, foreign brands such as Unilever, Procter & Gamble, Kao and other foreign brands always occupy the leading position, but on the laundry detergent shelves, the local Chinese brand Blue Moon is exhibited more In one prominent position, foreign brands have to step aside.

When Zhang Lei returned to China and founded Hillhouse Capital in 2005, he found that supermarket shelves on the mainland were filled with foreign-owned daily chemical brands, it was still difficult to find laundry detergent, and there was no Chinese daily chemical brand. Zhang Lei discovered this business opportunity and also saw the trend of a major increase in consumption in the Chinese market, so he found Blue Moon.

Blue Moon founder Luo Qiuping graduated in the early years from the Wuhan University Chemistry Department and earned a master’s degree from the Guangzhou Institute of Chemistry of the Chinese Academy of Sciences. He went overboard to do business at the beginning of China’s reform and opening up and founded the “Blue Moon” brand. When SARS struck in 2003, the public paid more attention to personal hygiene, and Blue Moon hand sanitizer was also sold nationwide. After SARS, Blue Moon faced a transformation problem.

When Zhang Lei and Luo Qiuping met, they had fun and decided to work together. In 2008, Blue Moon liquid laundry detergent was launched. With the help of the Beijing Olympics, he invited diving queen Guo Jingjing as a sponsor. It gradually became a national daily brand and promoted Chinese consumers’ habit of switching to liquid laundry detergent and laundry soap.

Catch up with the development of continental e-commerce

In 2015, Blue Moon suddenly “disappeared” from the shelves of large supermarkets such as RT-Mart and Carrefour … The reason was that Luo Qiuping asked the supermarket to give special Blue Moon shelves, but the price was not agreed and the collaboration has failed.

As a result, Blue Moon turned to online platforms and took the morning round of e-commerce. At the time, Hillhouse invested in JD.com (09988), and then joined the two to collaborate. Blue Moon reaped the rewards of the era of e-commerce development. According to the prospectus, online sales accounted for 47 percent in 2019, and online revenue was 3.328 billion yuan. In 618, Double 11, and other ecommerce festivals this year, Blue Moon ranked in the top 3 sales of multiple ecommerce platforms.

Blue Moon is firmly at the top of market share all year round and its revenue is overwhelming. By maintaining a high level of gross profit margin, it can control lower costs and expenses. From 2017 to 2019, the gross profit margin increased year on year, from 53.2% to 64.2%, and the net profit margin went from 1.5% to 15.3%. In addition, over the past three years, the price of palm oil and low density polyethylene packaging material, which accounted for 80% of the cost, has dropped significantly and marketing expenses have dropped to 33%. which significantly increased Blue Moon’s net income.

Blue Moon products have also won the favor of Chinese housewives. According to a series of chemical composition analyzes and research evaluations, even though the price of Blue Moon laundry detergent is relatively high, its price is high and its decontamination capacity is among the best, attracting many consumers.

To track IPO news, you can browse[IPO IPO]or use the gadget of IPO IPO

Download and use the “Hong Kong Economic Times” App for free and become a member to receive the most accurate financial and current news in real time, with a variety of welcome gifts to choose from!

Short video of speculation promotion, broadcast on the “Hong Kong Economic Times” app before the market opens every trading day, watch it now!