New images with POCO M3! It comes in three colors, has a selfie camera and a new design on the back 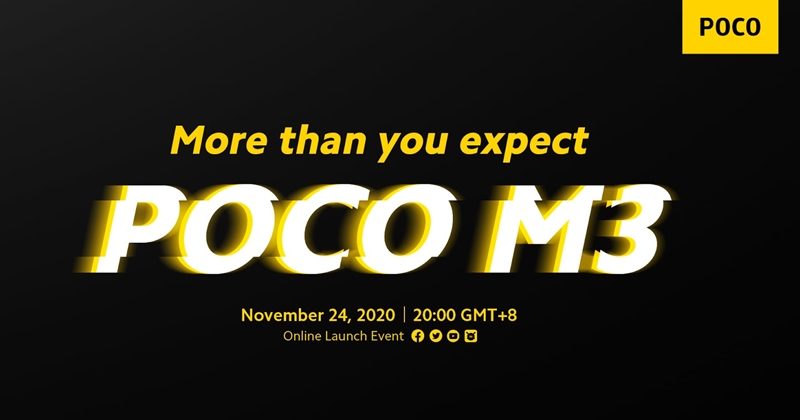 Xiaomi is very close to the launch of the smartphone LITTLE M3. Its debut is expected during the event on November 24, next week. However, apart from the name of the new phone, Xiaomi has not revealed any details about it and all information about the device is just leaks or guesses.

Thanks to Councilor Ishan Agarwal, The design of the new Xiaomi phone is unveiled today. Apparently, the device doesn’t have too many modifications on the face. The screen will have a teardrop notch, which integrates the selfie camera, just like the previous model, POCO M2. But the back reveals a new look and a rectangular camera module positioned on the top of the phone.

The renders also reveal placing the fingerprint sensor on the side, integrated into the device lock button located on the right side. The SIM slot is on the left. Let’s go back to the back where we see a triple camera setup and a dual LED flash. On the right side of the module is the logo A LITTLEand the terminal will come in yellow, black and blue.

In terms of specs, the long-awaited smartphone will come with a 6.53 inch LCD display with FHD + resolutionand inside we should have a processor Qualcomm Snapdragon 662 and 4 GB of RAM. The device would have a generous 6,000mAh battery and 18W fast charging.

As for the camera, it should have a 108MP main sensor, but there is currently no other information. It is also rumored that the POCO M3 will be the global version of the Redmi Note 10, not yet released, but which recently appeared in the TENAA database with similar specifications. Since the POCO M2 was a renamed Redmi 9, this theory really makes sense.

Xiaomi POCO series phones are also gaining popularity locally. The launch event of the new smartphone in Europe is scheduled for November 24, with the slogan “More than you expect”, so we can still expect surprises from Xiaomi.