Litecoin – One Of The Top Altcoins – Litecoin USD (Cryptocurrency: LTC-USD) 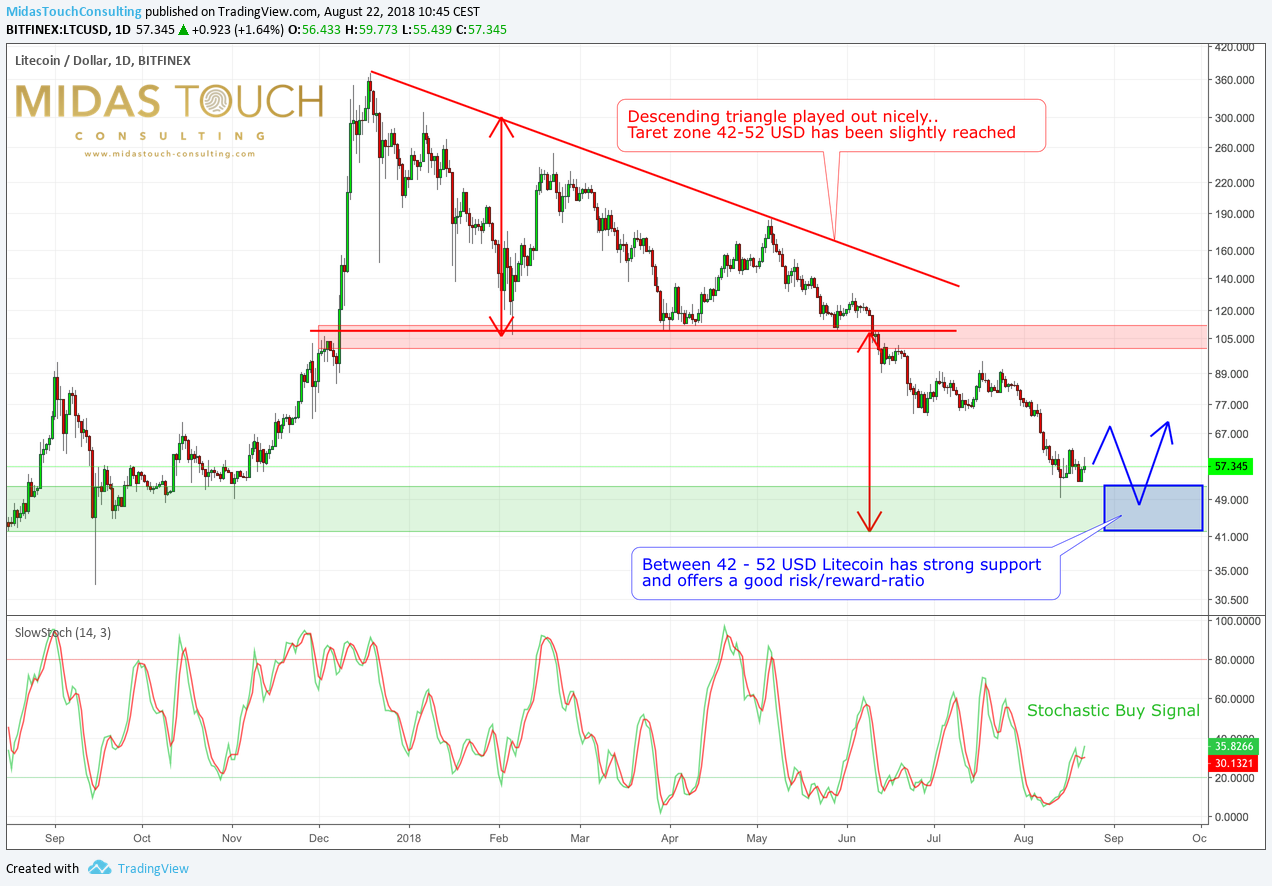 While the crypto sector is captured in a bear market, it makes sense to use the time to research potential future opportunities and learn more about specific use cases and understand all those different tokens and coins.

Litecoin (LTC-USD) is the oldest alternative currency and remains a good alternative to Bitcoin (BTC-USD). With its open source, a completely decentralized global payment network without central authorities, it belongs to the major peer-to-peer Internet currencies that allow instant payments, almost zero, to anyone in the world.

Any bending below $ 50 USD in the next couple of weeks and months seems to be a good buying opportunity.

More information on the best altcoins

When they are introduced into cryptocurrencies, it is no longer appropriate to include bitcoins. A few years ago, this original cryptocurrency was so far away and the market leader that sometimes seemed the only one worth knowing. Since then, however, numerous "altcoin" – that is to say, alternatives to bitcoin – have become more important, more valuable and more useful. So while it is true that at present no one has exceeded the bitcoin in value, it is also true that anyone interested in the cryptocurrency should know the best altcoins.

One who has been commonly referred to as the nearest bitcoin imitator and somehow the altcoin pioneer is Litecoin (LTC-USD).

If you understand the cryptocurrency in general, a definition of Litecoin will seem very simple. It's open software, peer-to-peer digital currency. With verified transactions on a blockchain and no central authority handling things, Litecoin (LTC-USD) is essentially identical to Bitcoin (BTC-USD) in structure and operation. It can facilitate payments all over the world with almost negligible transaction fees and with the same anonymity and security that is at the heart of the bitcoin.

How Litecoin Is Different

As stated, Litecoin is indeed a replica of bitcoins in form and function. However, there are some differences, mainly in market capitalization, coin counting and transaction verification. Bitcoin was created in such a way that there would be only 21 million single mined coins, and this is somehow responsible for its high value. A predetermined finished supply has an effect on demand and evaluation. Litecoin works the same way, only with a much higher limit of 84 million coins that will never be extracted. However, according to CoinMarketCap, Litecoin also has a market capital drastically lower than $ 3.3 billion, to $ 112.5 billion bitcoins (approximately).

Regarding transaction times, it could be where Litecoin (LTC-USD) has its most significant advantage. If there is an inconvenience in using bitcoins as currency it is that a block of transactions can take about 10 minutes to be verified, which means that payments are not always instantaneous. With Litecoin, it takes about a quarter of the time, making transactions cheaper. According to the founder of Litecoin, Charlie Lee, the period of confirmation of Litecoin's transaction is shorter than about 2.5 minutes. (Bitcoin takes 10 minutes.) Some also appreciate that Litecoin, at least for the time being, operates on a much lower value and is a little closer to ordinary currency, while bitcoin is so valuable that a transaction could involve an amount like 0.001 BTC, which may seem a bit difficult to manage.

Where to use Litecoin

It is difficult to provide any kind of complete overview on where to invest Litecoin, although in the end it could be better to simply do a search when you are looking to spend (or buy). This is only because new traders always go and come for cryptocurrencies. Right now, however, the greatest opportunity could be eGifter, which allows you to spend Litecoin to get gift certificates for a number of other stores, and therefore makes it more commercially useful. Elsewhere, Litecoin can be used in certain online sales environments, in some casino sites and in a random assortment of independent traders who have decided to accept the cryptocurrency. In addition, Litecoin remains one of the THE favorite altcoins of geeks and programmers. All this leads to the conclusion that Litecoin is used as a form of digital money and there will be demand in the future.

Where Can Litecoin Grow

Answer the question of where Litecoin has the greatest potential for growth is how to answer the same question for cryptocurrency in general. The obvious answer, if somewhat vague, is through digital retailing. Sites like Overstock and Steam have in many places accepted bitcoins, and if platforms like these expand into altcoins, they will make Litecoin significantly more useful.

We have also mentioned casino game sites, and these, in addition to betting platforms, should also be on the radar of cryptocurrency owners. Some casino sites have already done business with cryptocurrencies, and it seems likely that betting platforms will follow the example. Each bookmaker is different, and some try to get a specific advantage through bonuses, deposit options, etc., which makes it a natural step for cryptographers to take a natural step.

There are obviously more possibilities, but these are some logical avenues that come to mind and give you an idea of ​​what to look for if you are interested in the potential growth of Litecoin.

In general, the crazy growth of cryptocurrency prices in 2017 could currently restrict their adoption as they are used primarily as speculative resources rather than as currency for real-time transactions. In addition to its volatile prices and therefore high volatility combined with greater popularity, cryptocurrencies have attracted a lot of controls from policymakers. Some doubt their position as a medium of exchange while some accuse them of being nothing but a "speculative asset". But more regulation should also help reduce the volatility of the regulated currency. So far, Litecoin remains extremely unregulated. 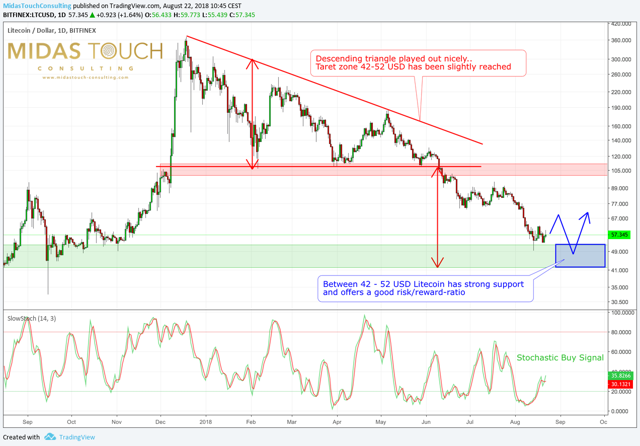 Litecoin daily chart to August 22, 2018. The descending triangle has worked well in the last two months ..

From its historical highs to $ 375 USD in the nineteenth December of last year Litecoin corrected sharply. The downward triangle scheme worked well. After breaking its crucial support between $ 109 and $ 112, Litecoin plummeted lower and plunged into its strong support zone between $ 42 and $ 52 USD. Currently Litecoin seems to work on a short-term fund, while the Stochastic is flashing a buy signal.

The overall Litecoin does not seem too exciting here because another withdrawal in its support zone is quite likely over the next two weeks or even months. But below $ 50 USD, the risk / return ratio is in favor of a long trade or even a long-term purchase. It seems that more patience is needed here.

At the time of writing, Litecoin (LTC-USD) has just under $ 60 USD in value. This puts it around the minimum for the year 2018, with the top that it was only a hair over $ 300 USD in January. At that time, the wave of cryptocurrency by the end of 2017 was still declining. It's a wide range, but these two numbers seem to represent more or less realistic boundaries for Litecoin these days – even if it's falling.

We should see more weakness in the coming months to and especially below $ 50 USD, it would be time to be bold and take action.

Disclosure: I / we have no positions in any of the above titles, and we are not going to start any positions within the next 72 hours.

I wrote this article alone, and expresses my opinions. I'm not getting compensation for this. I have no business relationship with any company whose title is mentioned in this article.