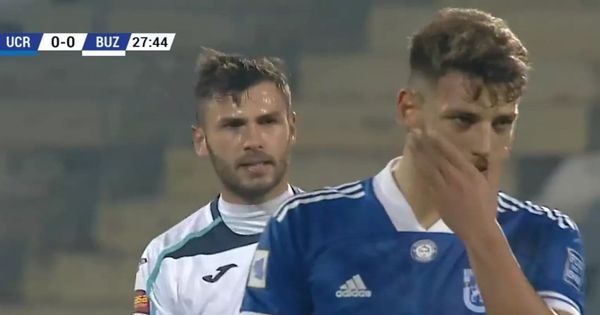 FC U Craiova 1948 players entered the field with a message of support to the team owner Adrian Mititelu, sentenced to 3 years in prison 10 days ago: “Nea Adi, be strong, let’s fight for promotion!”. After two consecutive draws, FC U Craiova 1948 failed to beat Gloria Buzau, drawing 1-1. In the match played at Drobeta Turnu Severin, the score was opened in the 72nd minute by Diallo, who scored with a header from inside the area.

The draw on the scoreboard was led by Constantin Stoica, who scored with a superb shot placed under the crossbar from teenager Popa, who positioned himself badly. Ilie Stan danced on the sidelines to the draw, the one that brings his team to the tenth position in the ranking of the second bracket. FC U Craiova 1948 ended the game with one man down, Ciolacu is eliminated in extra time, but remains in first place in the League 2 standings, with 23 points from 11 games.

The referee blows the whistle to end the match! U Craiova 1948 – Gloria Buzău 1-1
min 90 + 2: Ciolacu receives the second yellow card after a simulation in the area of ​​Buzau.
min 89: Gugu misses a huge opportunity! His header goes to the crossbar and the score remains at 1-1.
min 87: GOOOAAAL – GLORIA BUZĂU! Constantin Stoica scores a fabulous goal with a 20-meter shot placed under the crossbar. The score is now 1-1.
min 85: Change to Gloria Buzău: Stoica enters and Tucaliuc leaves.
min 77: Double change of Ilie Stan: Pațurcă and Ciobanu leave, Piftor and Perju enter the field.
min 76: Double change in Craiova: Răducanu and Bălan leave and Stoenac and Pop enter.
min 72: GOOOL FC AND CRAIOVA 1948! Diallo manages to open the scoring with a header from inside the box sent to goalkeeper Stoian.
min 70: Munteanu manages to make a nice pass on the edge of the box, but his shot ends just wide and is easily caught by Stoian.
min 61: Double change on the guest field: Chică-Roșă and Petre leave the field, Iurcu and Roșu enter the field.
min 60: The second change in Craiova. Lorenzo Paramatii leaves and Valentin Munteanu enters, bought by Gloria Buzău in the summer.
min 57: Paramatti thinks he has been pushed and lets the referee know.
min 53: Dan Vasilică makes the first change of game: Anghelina leaves and Ciolacu enters.
min 46: Bălan misses a huge opportunity! The Craiova player fails to make a cross from Anghelina’s corner towards the goal.
The second half has begun!

The referee blows his whistle to end the first half!
min 41: Claudiu Bălan’s left-footed shot is blocked, but the ball hits Ioniță and changes direction.
min 36: Popa manages to repel Balgiu’s header with emotion and takes away the danger.
min 32: Costinel Gugu heads into the center but the ball goes wide.
min 31: Negru has a great chance, but his shot is blocked by Stoian in the corner.
min 28: Pațurcă sends a long shot, but the ball goes wide.
min 16: Great opportunity for Gloria Buzau! Tucaliuc sends a dangerous free-kick from outside the box, but the ball passes the goal defended by Popa.
min 13: Ioniță heads a ball from the corner, but Diallo manages to block it.
min 4: The first important occasion of the match! Bălan shoots from the edge of the area, in the center of the goal, but Stoian holds without problems.
The game has begun!

LATEST NEWS. The intensive care units in which 10 patients died were closed. Minister Nelu Tataru confirmed. Who opened the door