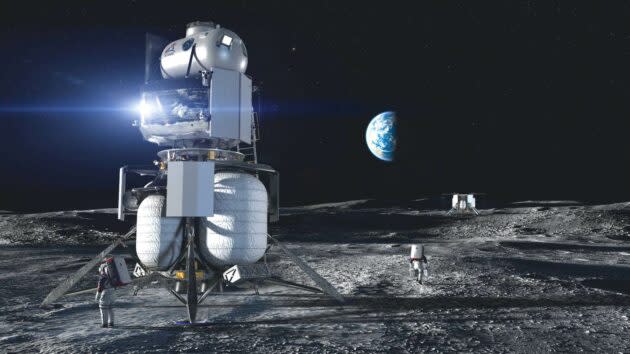 Amazon CEO Jeff Bezos’ space venture Blue Origin is working on a landing system that could bring astronauts to the moon as early as 2024, but is also keeping its options open to deliver a ton of cargo to the lunar surface a year earlier. .

Blue Origin chief scientist Steve Squyres outlined the current state of plans for a delivery of Amazon-like goods to the moon today during a virtual symposium presented by the University of Washington’s Space Policy and Research Center.

The idea isn’t exactly new: Blue Origin launched its Blue Moon cargo lander concept with the Trump administration in early 2017, even before President Donald Trump formally took office. And a Blue Origin executive mentioned the 2023 date for a cargo landing more than two years ago at a space conference in the Seattle area.

But Squyres ‘observations served to confirm that the 2023 mission, which would provide a first test of the technology for the manned landing system, is still part of Bezos’ grand vision for creating a sustainable human presence on the moon. “We have to go back to the moon, and this time to stay,” Bezos told me in 2018.

There are no indications that NASA has yet to order a delivery of the cargo, but Squyres said that if the green light is eventually given, the unmanned mission would aim for a spot not far from the site selected for the 2024 manned landing. .

“NASA talks about the Artemis base camp as a kind of first initial foothold on the lunar surface,” he said. “And this is the chance to start doing it. This lander in 2023 can carry up to 1,000 kilograms, an entire metric ton of cargo, on the surface. Part of that cargo may be emergency supplies, tools, spares, a rover for the crew to drive with if NASA has it ready in time.

This could lay the groundwork not only for the planned landing in 2024, but also for follow-up missions. “Downstream of this, we plan to deliver larger crews to the lunar surface, delivering cargo to the lunar surface to build that permanent presence,” Squyres said.

Blue Origin is working with industry partners – including Lockheed Martin, Northrop Grumman and Draper – to develop a system that can land astronauts on the moon and bring them back from the lunar surface to their space transit station. The unmanned lander would not require the lift module that Lockheed Martin is building for the manned landing system.

For what it’s worth, SpaceX and Dynetics are also working on lunar landing systems, and SpaceX President Gwynne Shotwell has talked about sending an unmanned Starship cargo mission to the moon by 2022.

Squyres, who joined Blue Origin last year, is well aware of what is required for off-Earth robotic landings. During his time at Cornell University, he was the principal investigator for NASA’s Spirit and Opportunity rover missions to Mars.

Today Squyres noted that NASA is working on several robotic probes to test the technologies needed for Artemis’ moon expeditions. One such probe is the VIPER rover, which is expected to be launched in the lunar south pole region in late 2022 or 2023. VIPER will evaluate prospects for water ice extraction that could be used as a resource for lunar operations.

More from the SPARC Symposium: Satellite warfare could lead to ‘mutually assured destruction’

Squyres said technology demonstrations aimed at the extraction and use of lunar water are “a very, very active area of ​​research right now” for NASA and its partners. But he said further innovations will be needed to support a sustainable human presence on the moon.

“When you talk about what you will build on the lunar surface, I think the most immediate need is the landing and launch pads that will make flight operations safe in a base where there are people and infrastructure,” he said.

Without such pads, missile-powered landings and take-offs are likely to blow up moon rocks and soil all over the place, Squyres said.

Lunar soil, also known as regolith, could be used as a building material on the moon, said Shirley Dyke, who directs Purdue University’s Resilient Extra-Terrestrial Habitats Institute. But he said a huge knowledge gap would have to be bridged first.

“We don’t have a lot of information on regolith,” Dyke said. “We know the basic properties and basic contents, I should say, but what we don’t know is the variability – the range of different materials possible as you move to different places on the moon.”

Dyke said lunar builders will need to find a substitute for at least one basic ingredient used in Earth-style construction.

“There is this magical material here on Earth called Portland cement,” he said. “And this doesn’t exist on the moon.”