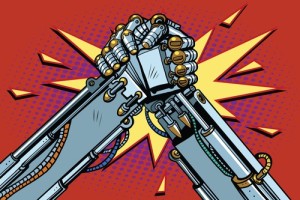 A look at the future of blockchain and robo-violence coming up next year with Duncan Jones, Thales eSecurity's leading research and innovation team.

As part of our 2019 forecast series, we sat down with Duncan Jones, who leads the Thales eSecurity research and innovation team, focusing on the emerging security threats and information technologies of tomorrow, which ponders the real advantage of the blockchain and the machine-on-machine "war" that he sees arriving in 2019 .

1: Blockchain is still a solution looking for a problem.

2019 is sure to be the peak of the hype cycle when it comes to blockchain, but certainly not the peak of implementation, which remains years away. The technology still lacks mature features, such as user and key management, which are needed to drive the business up and running. In fact, every time I talk to customers who have expressed interest in the blockchain,

I ask if they have a problem that requires blockchain to solve it, or a blockchain budget that is looking for a problem – it's always the second. While the promise remains, I expect the hype to stabilize as companies get more appreciation for the complexity and collaboration needed to integrate corporate blockchain applications into their day-to-day operations.

2: more research is needed to understand the algorithms that make decisions about our lives.

Every day we read about excitement and potential as algorithms continue to become smarter. We are training them to make all kinds of decisions, from what a car should do at an intersection to determine if a criminal in prison deserves a hearing on the floor. I am a big fan of innovation and I think we are doing something with artificial intelligence and machine learning, but I have to raise a cautionary flag. Unfortunately, with every new technological advance, there is someone out there with malicious intent who wants to exploit it.

See also: Expect more consumerization of RPA in the next listen

One of the things that are so extraordinary in machine learning is the same thing that worries the most: machines make decisions themselves. In the hurry of autonomy and in a more advanced decision-making process by the machines, we must be sure that we are doing the necessary research to better understand the algorithms and how they are making decisions. Without this understanding, we can not begin to understand how others could subvert an algorithm.

# 3: A change in the computer gun range – from man to machine to machine versus machine.

Expect to see more and more machine learning on both sides of the information battle. We have begun to see such algorithms replace manual efforts to compromise the systems and we will see more of them in the next year. At the same time, machine learning technology will be used to guess what attackers are doing and help mitigate attacks.
A welcome talk at the European Security and Privacy Symposium last year showed how neural networks can decrypt passwords at a similar pace to teams of experts using cutting-edge tools. Ironically, the same technology can be used to advise users on the strength of their password.

4: reconfigure products or create new ones to exploit post-quantum algorithms.

The arrival of large-scale quantum computing promises huge progress in several fields, as some difficult problems become much easier to solve. While the progress of quantum computer development has fluctuated – some experts do not believe we'll ever see a large-scale implementation – the prospect of a sudden turnaround can not be taken lightly.

Computer networks are safe only because today's computers are not able to solve certain mathematical problems. Once quantum computers have arrived, the game will change and some of our existing defenses will be useless. The National Institute of Standards and Technology (NIST) is conducting a competition to launch tires on various time-resistant cryptographic proposals, so cryptography on the Internet is not offset by quantum capabilities. The results may have been five years, but once the winners have been announced there will be a rush to bring post-quantum products to market.

Organizations must focus on getting ready-made products for quantum computers. The only way to be the first to go out is if you now do the right investment. As long as we do not know what algorithms to support, the best approach is to pursue "cryptoagility", ie the ability to easily modify the cryptographic algorithms used to protect products.

(Editor's note: where the year is over? 2019 is upon us and the brightest minds in the real-time analysis space do not see the new year come and guess where they think this space is going … discussing and building the future of real time by adhering to the RTInsights Brain Trust)