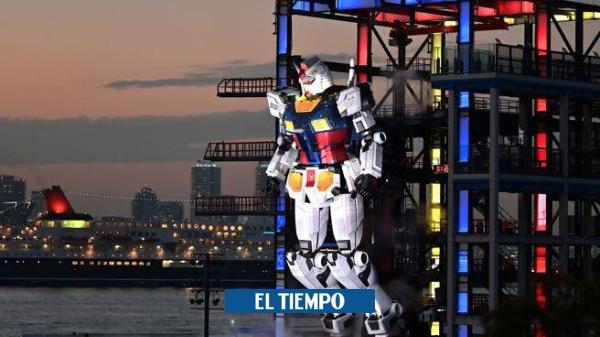 Gundam, “the giant”, is a robot about 18 meters tall, weighs about 25 tons and is inspired by “RX-78-2 Gundam”, a character from the anime series “Mobile suit gundam”, which was released in Japan in 1979.

The robot, “originally” from Japan, is made of steel and carbon resin. Unlike the series character, who was controlled by a human pilot inside the robot, Gundam is remotely controlled.

This giant will be part of the Gundam Factory Yokohama, a tourist attraction that, in addition to offering the robot exhibition, will have restaurants and shops.

On November 29, Gundam passed one of the mobility tests, which was recorded on video.

In the images, the robot was observed in front of a platform that exceeded its size. The “doors” of the facility moved to allow the Gundam to advance.

After a few seconds and at a very low speed, the mechanical giant raised one of his legs, flexed his knee and took “his first step”.

(You may be interested in: artificial intelligence as an ally in customer service).

It is worth noting that the robot can also move its head and arms and has the ability to perform other maneuvers such as kneeling or pointing to the sky.

(If you visit us from the app watch the publication here).

The entire process of assembling and creating the robot was documented on the Gundam Factory Yokohama YouTube channel.

In one of the videos, Jun Narita, head of design, ensured that one of the biggest challenges was balancing the weight of the materials and the motors, as he had to respect a weight limit for each part, for example Gundam’s hands could not exceed. the 200 kilograms.

“That weight restriction is a curse,” he commented in the video.

Katsunobu Kato, the Japanese government’s cabinet secretary, said at a conference that he hopes that with Gundam improves tourism in Yokohama city, as this sector has been hit by the new coronavirus crisis.

(Read on: See Titan, a giant robot that amazes (and scares) with its greatness.)

“I hope this leads to stimulating tourism demand and revitalizing local areas,” he said.

Furthermore, he stressed the importance of taking the necessary measures to avoid contagion from covid-19.

“Obviously we now have the coronavirus problem. I want people to take initiatives like this while striving to prevent the spread of the infection, ”Kato added.

The activation of Gundam was scheduled for October, but has been delayed due to the pandemic. Then it was announced that, from December 19, people will be able to buy tickets to enjoy the giant robot show.

(If you visit us from the app watch the publication here).

(You can see: the app that can translate your cat’s meows).

The main organizer of the show is the Bandai Namco Group, a Japanese company specializing in video game development. However, there are around 15 companies associated with the project.

Under the name of “Gundam Global Challenge”, the construction of the humanoid was announced in 2014. Now, six years later, tourists and fans of the anime series will be able to see it for themselves.