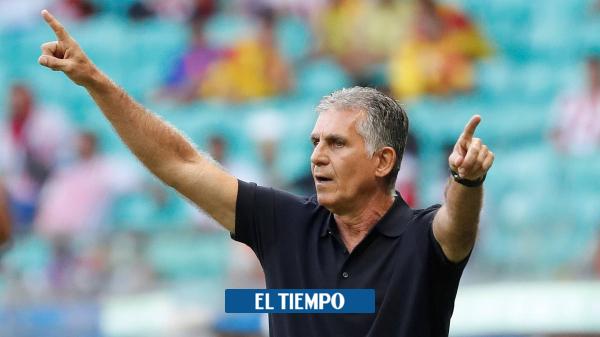 
The last few hours have given the reason to the coach of the Colombian national team, Carlos Queiroz, who announced that he would resist until the day after tomorrow to give the list of squads for the matches against Uruguay and Ecuador, on dates 3 and 4 of the draw. South American for the Qatar 2022 World Cup. Fright, physical problems and the dynamics of the covid-19 pandemic, with a positive confirmation in one of his assistants, must have the very attentive Portuguese coach.

At least Queiroz has peace of mind that Jéfferson Lerma has recovered from a hamstring injury, which took him out of competition for two weeks. “Looks fine Jeff. He has been training for the past few days. So the decision is whether to bring him on the pitch for the Sheffield game or if we involve him on the weekend for the Birmingham game, “said Jason Tindall, Bournemouth manager.

But now the concern is for one of the team’s referees, Radamel Falcao García. The ‘Tiger’ was unable to finish training with Galatasaray yesterday. “Falcao, who in the last part of the training felt pain in the right upper anterior muscle group, could not complete the session. The health of our player will be determined after the exams that will take place tomorrow (today), ”the club announced in a statement. Depending on what those tests show, Falcao will make a decision in the company of the coaching staff.

Another of the protagonists of the national team, James Rodríguez, has not yet been confirmed on his return, after the annoyance that took him out of the match against Newcastle last weekend, even if, surely, it will be against Manchester United on Saturday.

Carlo Ancelotti, the Everton coach, does not stop praising him. “When I brought James Rodríguez this summer there was concern about his physical condition and how he would adapt to the intensity of the Premier League. During the first four games, do you know how many times he appeared? Seven. He has more assists and goals than sprinters, “Ancelotti told France Football.

But today the concern is another: England yesterday entered a new confinement until 2 December. The new quarantine includes a ban on leaving the country, even if it would initially only be for leisure travel. Any departure of James, Lerma, Yerry Mina and Steven Alzate to Colombia would be considered a professional trip. The Premier League will continue to function, with the stadiums behind closed doors.

“We have monitored the border issue and it is validated every day to see what changes there are in the rules and the impact of the flights,” said a source consulted by EL TIEMPO.

Another country that is strengthening the measures against covid-19 is Italy, where there are regions where confinement will return. You can only go to work or school. One of these is Lombardy, the region in which Bergamo is located, home to Atalanta, where three permanent players of the national team play, Duván Zapata, Johan Mojica and Luis Fernando Muriel. The extent of this measure is not yet known and whether they will be able to leave the country to participate in a possible call.

It had already happened in the first two days of the draw, when goalkeeper David Ospina could not travel because his club, Napoli, had not given him permission due to the cases of covid-19 that occurred on campus. They were also excluded, for having come into contact with a coronavirus positive person, the two Colombian players of Porto, Luis Díaz and Mateus Uribe.

But covid-19 did not affect only the squad of the national team. A Federation source confirmed this one of Queiroz’s assistants has the coronavirus. The source refrained from giving the name.

From this part of the world the national team looks to Mexico, awaiting the evolution of Stefan Medina, who had Queiroz’s confidence to leave, but who suffered a muscle injury in the match against Chile.

Medina hasn’t added any minutes yet. Diagnosis of his right thigh muscle injury gave him three to four weeks of disability, which has yet to be met. In fact, Medina is already working on the field with Monterrey, albeit still differently from the rest of the team. I could reach him to return.