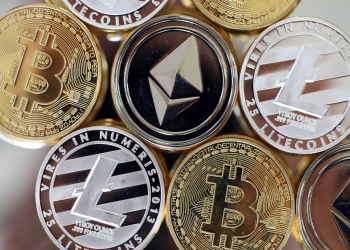 Cryptocurrency traders hoped that prices would remain in force on Monday, only to see the bitcoin slip another 5% during the early hours of trading, with the cryptocurrency hovering around the $ 5250 level.

The fall of bitcoins also helped to drag other outcoins, with Ethereum falling to $ 152, representing a 10% decline and the lowest level that cryptocurrency has reached in the last 16 months.

Losses of ripple and litecoin

With two of the biggest cryptocurrencies suffering huge losses, it is not surprising that other currencies have also suffered, with ripple (XRP) and litecoin, which have also seen significant declines.

In fact, XRP is down 5% and is currently around $ 0.48 levels. However, it is worth noting that despite the losses suffered, XRP did much better than its rival Ethereum, which saw its market peak fall to around $ 16.5 billion, after losing around 1, 6 billion dollars after some painful trading days.

The loss suffered by Ethereum was the gain of XRP, with the size of an altcoin that exceeded its rival, making it the second largest cryptocurrency in the market in terms of market capitalization.

Elsewhere in the market, litecoin, cardano and monero were not able to escape the downward momentum, with all three cryptocurrencies losing more than 10% of their value in the last 24 hours.

Monday marks yet another sad trading day for cryptocurrencies, with the market falling to its lowest levels so far this year, with traders having seen more than $ 35 billion worth of money swept away from the table and left scratch your head when the market returns to rise.

But many analysts, including those of Bloomberg Intelligence, believe that there is even worse, with the price of bitcoin that should fall to a minimum of $ 1500, which represents a decline of 70% in price, which would probably drag the value of other altcoins. the point of becoming virtually worthless.