Coronavirus in the world: AI raises accusations against Belgium – politics 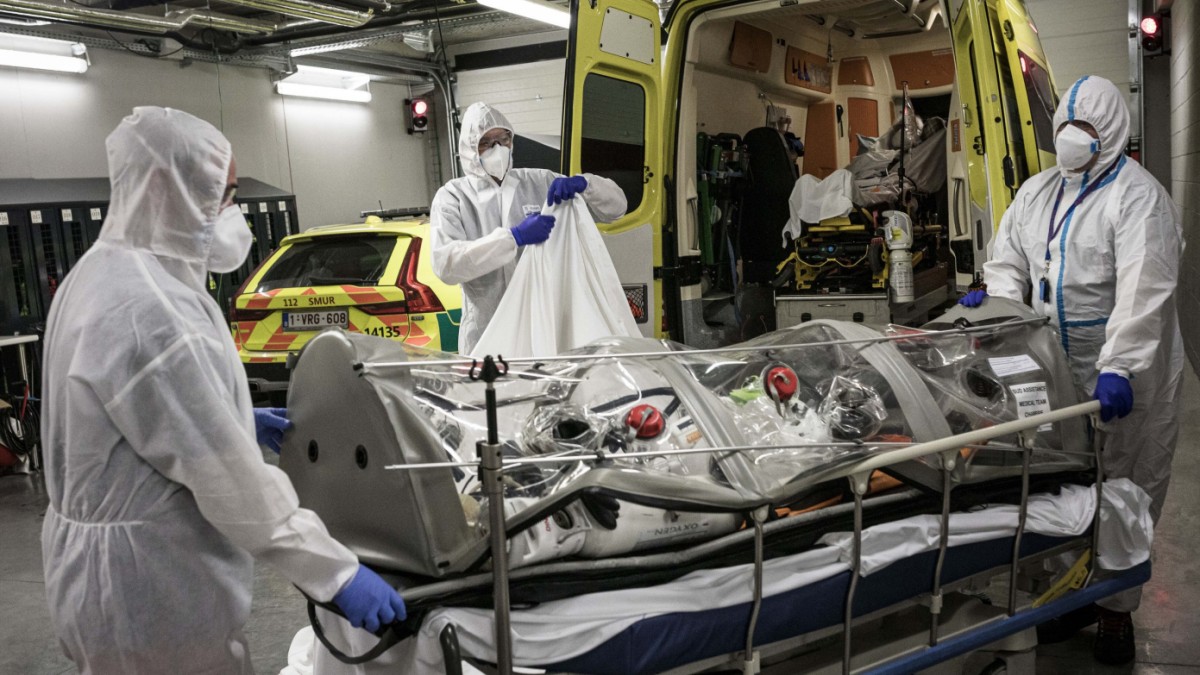 Amnesty International (AI) accuses the Belgian government of violating human rights during the corona pandemic because many infected patients were not treated adequately in nursing homes. Many of them were not hospitalized, according to AI. Also, the nursing staff was overworked.

According to the humanitarian organization Doctors Without Borders, only 57% of severe cases were carried from nursing homes to hospitals. This was the result of a “harmful interpretation of the selection guidelines,” says AI. This is probably why of the 14,400 deaths related to the virus, 61.3 percent were recorded in nursing homes. While nursing homes were quickly overwhelmed, the capacity of 2,000 intensive care beds in hospitals was never exhausted.

Coronavirus news – twice a day via email or push message

All reports on the current situation in Germany and around the world as well as the most important news of the day – twice a day with SZ Espresso. Our Newsletter updates you morning and evening Free registration: sz.de/espresso. In our News app (download here) you can also subscribe to the express or the latest news as a push message.

Vincent Fredericq, general secretary of the Femarbel Nursing Home Association, told Amnesty that many elderly people in need of care have been neglected. “Everyone was shocked by the images of the Italian and Spanish hospitals,” said Ferdericq. “These situations had a great impact on our federal decision makers who said from the start that it was imperative to avoid overloading intensive care. Nursing homes were relegated to the second tier and their residents and staff were the victims.” .

The survey results would confirm that the nursing homes and their residents have been abandoned by the authorities, said the director of AI-Belgium, Philippe Hensmans. At least until this was publicly known and condemned and the worst of the first wave was over.

Belgium was hit by the pandemic in March without the health service being equipped with personnel and protective equipment. In the first wave, Belgium had one of the most infections in the world in relation to its population. The country, with a population of 11.5 million people, has recorded more than 531,000 cases of coronavirus.

Amnesty based its investigation on testimonies from home residents and carers, NGO staff and nursing home directors. Relatives of residents who died from the virus were also interviewed. Most of them didn’t want their names mentioned. One patient’s wife described the situation as follows: “It was very difficult for my husband to eat alone. He lost weight over time. When I asked the staff for information, an assistant told me:” We can’t feed everyone. days. “

Brussels Government Health Minister Maggie De Block, head of the first wave, said in October about the situation in nursing homes that there had never been a message from her or her regional colleagues that crown patients in need of care should not be admitted to hospitals. Not even “elderly and handicapped”, explained the former Minister of Health in the public broadcaster RTBF. The Prime Minister’s office did not initially respond to a request from the AP news agency about the AI ​​report.

In Russia, authorities report 22,778 new infections, more than ever in 24 hours. In Moscow alone, 6,360 cases of infection were detected. Across the country, the number rises to nearly 1.95 million. This makes Russia one of the most affected countries in the world after the United States, India and Brazil. The death toll rises from 303 to 33,489.

According to the Ministry of Health, the number of new corona infections in Brazil increases by 14,134 to a total of 5.86 million in one day. Another 140 people died from or from the virus. This increases the death toll to a total of 165,798.

In the Czech Republic, one of the European countries most affected by the second wave of the crown, the number of new infections is decreasing. The Ministry of Health reports 1887 new infections within 24 hours. This is the lowest since October 4th. In total, more than 460,000 people in the country with its 10.7 million inhabitants have shown that they have contracted the coronavirus. The death toll linked to the virus rises from 150 to 6208. The total has doubled since October 29.

According to a tally by the Reuters news agency, the number of infections in the United States has crossed the eleven million mark for the first time. The number of cases has increased by one million in eight days, the fastest since the pandemic began. Previously, it took ten days to record the increase from nine to ten million infected people. It’s been 16 days between eight and nine million.

Study: Half of the people recovered from Covid-19 have been tired for weeks

Persistent fatigue is a problem for many people after surviving Covid 19 disease. In a study with just under 130 participants, more than half of former patients complained of symptoms of fatigue weeks later. Irish scientists report in the journal Plos One. According to the researchers, whether someone seriously ill with Covid-19 needs to be treated in hospital or not does not play a major role in subsequent fatigue. Almost 56% of the study participants had been treated with Covid-19 as hospitalized patients.

A full 52 percent of the 128 participants, who had all survived the acute phase of the disease at the time of the exam, were still showing symptoms of fatigue at least six weeks after infection, and for many this was the case even after ten weeks or more. A whopping 42 percent said they felt completely healthy again after this period.

“The study underscores the burden of post-Covid fatigue. It also shows that post-Covid fatigue is unrelated to disease severity,” said Liam Townsend of Trinity College Dublin, who conducted the research with several colleagues. “It is therefore not easy to predict trends”.

In view of the constantly high number of new infections, the Austrian government is stepping up measures in the fight against the crown pandemic. This was announced on Saturday afternoon by Chancellor Sebastian Kurz. From Tuesday to December 6 there will be “a second block like in the spring,” Kurz said.

A partial blockade had already been in place in Austria from 3 November. Gastronomy, tourism, culture and leisure facilities are mostly closed. But so far the expected successes have not occurred, Kurz says. Austria currently has an average of over 7,000 new infections per day. Authorities were no longer able to track down 77% of the new infections. In individual federal states such as Carinthia, Vorarlberg and Upper Austria, the numbers would increase exponentially.

For the next two and a half weeks, retail is also expected to close as much as possible, with the exception of shops for daily needs. Service providers close to the body also have to lock up, including hairdressers and cosmetic studios. If possible, all work should be transferred to the home office. Schools are also closed: after high schools and universities, schools for young people now have to switch to distance learning.

Exit constraints, which previously only applied at night, will be extended to the full day. The exceptions for leaving home are defined more clearly and strictly: these are purchases of everyday essentials, going to work or to the doctor. Spending time outdoors for physical and mental relaxation is still possible, like in spring. “Don’t meet anyone. Every social contact is one too many”, appeals Chancellor Kurz. Those who live alone should define a person with whom to maintain contact.

Religious services and devotions should not take place in the beginning. The Austrian government sought talks with all religious communities, Kurz said. You agreed to refrain from public services.

The goal is for compulsory schools and retail trade to be the first to reopen after the December 7 blockade, Kurz said.

British Prime Minister Boris Johnson has entered crown quarantine. As reported by the British media on Sunday evening, Johnson had contact with a person who later tested positive for Sars-CoV-2. “The prime minister will obey the rules and isolate himself,” a spokesman for Johnson said. The move comes just before a week with potentially pivotal Brexit talks.

In March, Johnson was one of the first heads of government in the world to contract the corona virus. The 56-year-old was in the ICU with persistent symptoms of Covid 19 in April. However, Johnson is currently showing no symptoms of the disease, he will continue to work from the official Downing Street office for the time being, his spokesperson said.