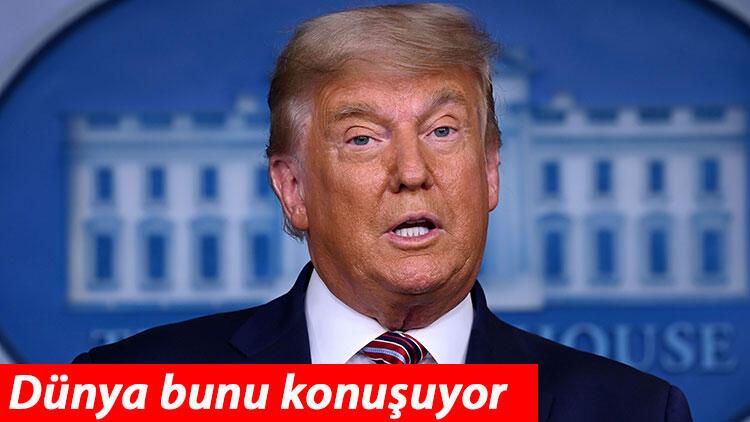 Latest news… Trump held a press conference in the White House regarding the elections held in the country on Tuesday, November 3, and the results have not yet been clarified.

Emphasizing that they are making efforts to ensure the credibility of the elections, Trump said: “If you count the votes cast legally, I easily win this election! If you count the illegal and late votes, (Democrats) can steal this election from us. We will address this issue. “. he used the expression.

Trump said he has already won elections in major states like Florida, Iowa, Indiana and Ohio: “We have won these victories, despite the intervention of major media, money and tech companies.” found the rating.

Pointing out that the polls were wrong in the election, Trump said, “The polling companies deliberately provided false information in this election. This is ridiculous. It wasn’t the blue wave they expected, instead it was the big red wave. The polls. of the press wanted to interfere with the election.

“DEMOCRATS DO NOT ALLOW OBSERVERS TO EXERCISE THEIR LEGAL RIGHTS”

Trump said they kept a majority in the Senate and didn’t lose seats in the House of Representatives: “We were winning in all the critical places, in the end, our votes miraculously started dropping. The Democrats didn’t allow observers to exercise. their legal rights. In some places we went to court. ” She said.

Emphasizing that they believe they will win elections in Arizona, where the results are still unclear, Trump said, “We will defend the security of this election and we will not let corruption steal such an important election. We cannot allow anyone to be put down. to keep quiet and produce unreal results “. he used the expression.

Claiming to have been following the elections held in his country for years, Trump said he had detected many irregularities in this year’s elections.

Responding to demands from Joe Biden and the Democrats for “all votes should be counted,” Trump said, “We must use the word ‘legal’ here. All legal votes should be counted. We want openness and transparency. Secret chambers for the counting of votes are mysteriously emerging. We don’t want ballots, illegal votes cast after election day. Commented.

Noting that they want an honest election and that it will benefit the American people, Trump said, “There will be too many cases. Because we have too much evidence and this process could end up in the highest court in our country. You will see. We will open many lawsuits because of that. these elections could be stolen from us. I have been saying for months that the votes cast will be disastrous “. He spoke in the form.