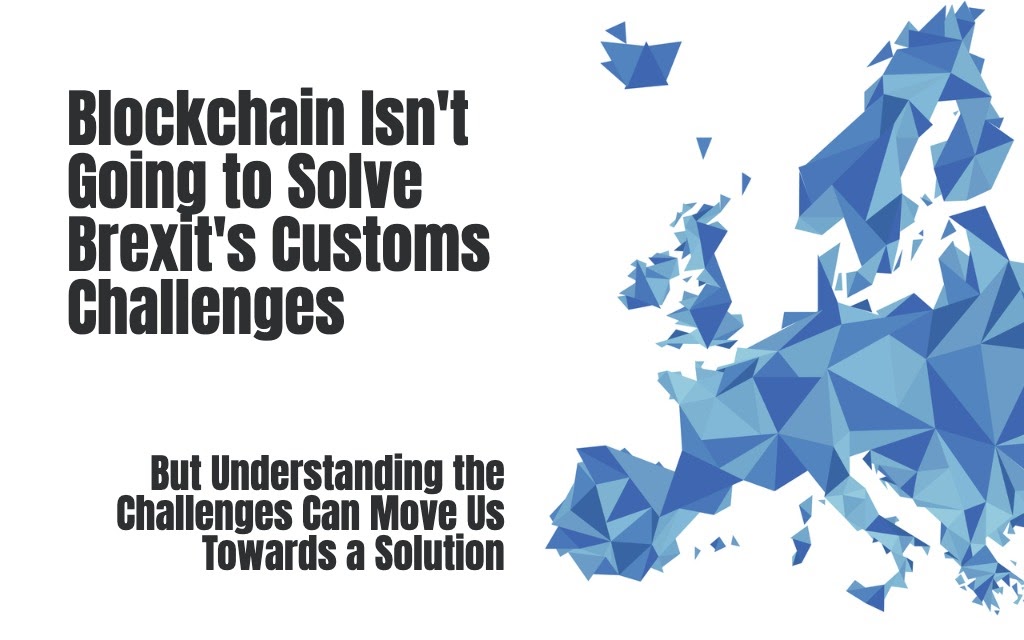 Brexit is happening. I love it. I hate it. Denying it. Excited for it. None of this matters. Is coming. And no matter a deal, no deal, a lot or a bad deal – things at the borders will change.

Can the blockchain provide a magical solution to make everything ok?

The short answer? No.

Yes, some blockchain solutions allow smart contracts to automate transactions, but even with this functionality, blockchain doesn’t even begin to be fit for purpose as a standalone technology.

Of the many digital challenges that Brexit creates and that need to be solved, the top 3 for me right now are:

If you want to push the boundaries of digital transformation here, linking commodity transfer directly to payment to leverage central bank digital currencies (which are NOT blockchain-based), then there is even more work to be done.

Through the pioneering TradeLens and Blockchain projects in Transport Alliance, the industry has learned a lot about how to make customs and shipping data management more digital, more efficient and much more accessible. They have also developed a fundamental experience for the creation and growth of blockchain consortia for the benefit of all stakeholders and not just the few “ global mega industries ”.

Although I have written about it many times, there are still a great many people who think that every single piece of data should be stored on the blockchain. Nothing could be more inappropriate.

Blockchain systems are not designed to handle large amounts of data. Nor are they meant to answer thousands of queries per hour (or second). Blockchain data is a large file and anyone who knows anything about the data will understand that there are well-known limitations for this type of data.

One of the most overlooked aspects of building a blockchain solution is the data architecture. By this I mean deciding how much data is part of the solution and where it is stored. The data must be accessible. It must be safe. It may need to be encrypted. Access to data must be carefully managed.

People who think everything should be stored on a blockchain don’t understand blockchain.

When most people hear the word identity, they associate it with their own identity. But the identity in the case of the blockchain is much broader. Identity in this context includes people, companies, agencies, ships, trucks, containers, IoT-enabled sensors – anything or anyone who can add or access data on the blockchain. Unlike bitcoin, where every transaction is pseudonymous (not anonymous), in the case of a blockchain-enabling trade, every identity must be fully known to maintain effective auditing and control. (If you are interested in exploring IT security regarding Blockchain and IoT, I point you here)

The challenge here is deciding where and how these identities are managed and maintained. The data on the blockchain can be transparent to all parties to ensure there has been no tampering, but due to commercial sensitivity, data confidentiality and other considerations, the identity system must be carefully protected. In a cross-border system with multiple suspicious parties, deciding who retains this information is vital.

Blockchain can refer to the data, protocol or network. In this case, I mean the network. When building the system, there must be a sufficiently large number of computers running the network so that any attempt to hack data on the blockchain can be detected and repelled. The infrastructure could be managed by governments (not always well regarded for IT systems and operations), or it could be managed by the myriad of businesses trying to share information and then make the data available to regulators, customs, to auditors and others.

Depending on the design of these systems, it doesn’t have to be thousands of systems, each with terabytes of storage space and petabit internet connections. And again, depending on the protocol, these systems don’t require huge processing power. It all comes down to what I describe as MEB (Minimum Effective Blockchain).

Sitting next to the blockchain is where true infrastructure investment is required. Each customs document is scanned and its metadata (data extracted from paper documents that have a fundamental meaning) must be archived. The safe and secure transfer of this data is what is required and what a properly executed blockchain infrastructure would provide.

Lack of regulation is NOT the problem. You don’t control the blockchain.

The false flag on why blockchain won’t solve Brexit? Regulation.

Several articles state that there is not enough regulation of the blockchain. It is one of those things that is extremely annoying because it incorrectly reports the problem. It’s like how customer service agents rely on the phrase “because of data protection” as a back up for anything they don’t want to do, even if the request has nothing to do with data protection.

The regulation on the information rules required for cross-border trade is already in place. Standardization is already in place. Most systems are fine. What is missing is an accepted way to ensure data integrity when moving digital data. And that’s what blockchain can provide.

We need regulation stating that blockchain-based systems can be used to ensure data accuracy and integrity.

This brings me straight to the point of why the blockchain won’t solve Brexit.

The blockchain alone is nothing more than a system for sharing data. It is a tool. It is infrastructure. Solving Brexit-related customs issues requires more wary parties to agree to work together, acquire digital data, create identity networks and build an infrastructure to support the network. It requires cooperation between competitors.

Unfortunately, today, there is an inordinate amount of risk and a precious little willingness to cooperate – on both sides.

Get in touch with us [email protected] / Twitter @igetblockchain.