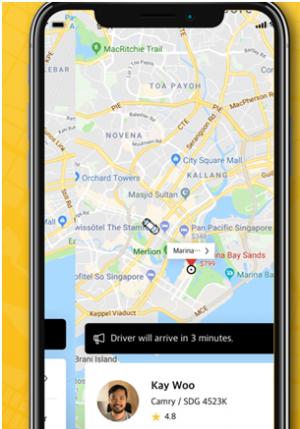 Mass Vehicle Leger (MVL), a Korean company providing the TADA service in Singapore, collected 50,000 users and 12,000 drivers a year after the service was launched in July 2017, chasing behind the main service provider, Uber.

The MVL TADA, which means "let's go around" in Korean, has almost the same Uber system. It is a service that allows ordinary people who own a car to join as a member and pass passengers on fares such as taxis. The difference with Uber is that TADA is based on a public blockchain. As a result, Uber receives a commission from the driver's members, but TADA does not. It provides rather MVL coins for drivers' members.

For drivers, TADA is more advantageous than Uber as they do not have to pay a commission and get coins. MVL coins can be cashed in cryptocurrency trading sites. The TADA approach was quickly known in Singapore and started threatening Uber. With the emergence of TADA, Uber lost more than 10,000 pilots in a month.

With the rapid growth of TADA members, the value of MVL coins has also increased. The MVL coins, which were traded at 2 won per unit up to last month, doubled to 4 wins, increasing the business value of MVL by more than two times. In the future, MVL will expand its service to nearby camps such as car repair and car hire, as well as car sharing. He plans to enter Vietnam within this year.

In fact, MVL was preparing for the O2O vehicle-related service in Korea for several years under the name Easy Six. In particular, Kakao has invested 700 million won (583,000 USD). However, as the payment of the coins was seen more and more negatively in Korea, Kakao requested the withdrawal of the payment of the coins. MVL did not accept, so Kakao recovered his investment in July of this year.

In addition, it is illegal for ordinary citizens who are not taxi drivers to get fares from passengers for a ride, so MVL eventually left Korea and turned to Singapore. After moving to Singapore, MVL grew rapidly and started threatening Uber, the number one local vehicle sharing service. Kakao, who invested in MVL and recovered his investment in seven months, lost a great opportunity.

One analyst said: "Unlike Korea, Singapore is an open country for ICO and car sharing services, which is why MVL was successful." The startup had to go abroad because of regulations koreans, making money abroad and creating jobs abroad. "