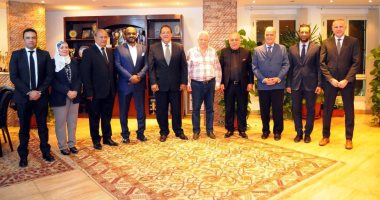 Ahmed Adel Abdel Fattah, a member of the Zamalek Club Board of Directors, was absent from attending the board meeting, due to his infection with the Corona virus, and the meeting which took place on Friday evening, at the club headquarters. , comes to discuss many files related to the club in the coming period, and the board meeting led to the following decisions: “Pay the dues of all players, discuss the preparation of the team for the final of the CAF Champions League against the Al-Ahly, approve the loan of Razzaq Cisse and the sale of Mohamed Antar and Ahmed Refaat to Al-Masry, and the Zamalek Board discussed some administrative matters relating to the club. “

For his part, Ahmed Adel Abdel Fattah confirmed in statements to “The Seventh Day” that his condition is now stable after the temperature has dropped and he will undergo a new tampon in the middle of next week, in order to reassure his conditions after the onset of symptoms disappear and the improvement of his health after the period of home isolation he spent. During the last period at his home.

Zamalek is currently preparing for the match against Masr Club, scheduled for November 21, as part of the quarter-finals of the Egyptian Cup, ahead of his upcoming match against Al-Ahly in the African Champions League final, for which Al-White qualified after winning Al Raja The Moroccan, with three goals to one goal, in the match that brought them together at the Cairo Stadium, in the return leg of the African Champions League semifinals, after winning the first leg with an unanswered goal scored by the Moroccan Ashraf bin Sharqi, winger of the team, in the meeting that brought them together at the Mohammed Stadium The fifth, in Casablanca, in Al-Abyad qualified with a score of 1/4 in the aggregate of the two home and away matches, to accompany Al-Ahly in the final match after Al-Ahmar’s victory over Moroccan Wydad, where the first leg match between the two teams at the Mohammed V Stadium, in Morocco, ended with the victory of Al -Ahmar with two unanswered goals, Before confirming his superiority in the second leg in Cairo, and having won three goals against one goal, he went through the semi-final with a score of 1/5, in the two games together.

The African Champions League final between Al-Ahly and Zamalek will be held on Friday 27 November at 21:00 at the Cairo stadium, as it will be the first time in the history of the continental tournament that two teams from one country will qualify for the final.