4.32% of all Monero has been extracted from encrypted malware

4.23% of all Monero (XRM) has been extracted from cryptographic malware since 2007, according to a report published by two researchers from Carlos III University of Madrid and King & # 39; s College of London.

The report covers the encryption malware since 2007, analyzing over 4.4 million malware samples over 12 years. The research found over one million malicious miners.

The researchers admitted that about 2,218 malware campaigns took place, accumulating about 720,000 XMR, equivalent to $ 57 million. One of these campaigns still in progress managed to reach 163,000 XMR. 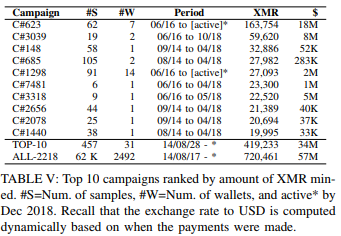 The report also states that the preferred tactics "is to use legitimate infrastructures such as Dropbox or GitHub to accommodate dropper, and stock mining tools like Claymore and XMrig to do real mining."

The increase in malware mining has increased by an incredible 4,000% compared to last year, with XMR in first place. The key factors for which Monero is the most popular mining malware currency can be attributed to the privacy features offered by the project. Making XMR a much simpler currency to move anonymously between portfolios. BTC came second, with another privacy-based coin, ZEC finished third.